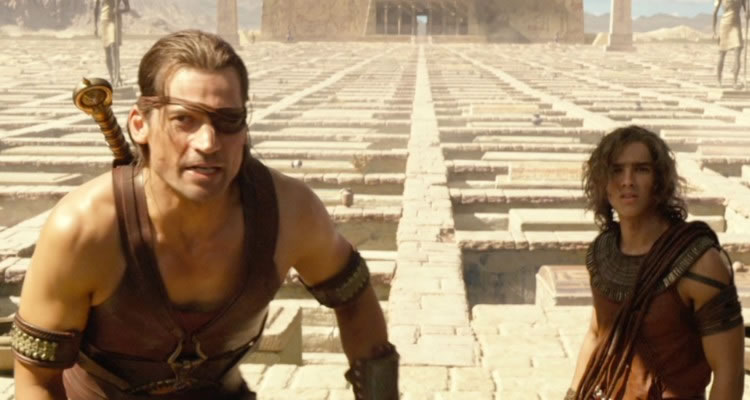 GODS OF EGYPT (USA/12A/127mins)
Directed by Alex Proyas. Starring Brenton Thwaites, Nikolaj Coster-Waldau, Geoffrey Rush, Elodie Yung, Gerard Butler.
THE PLOT: In a fantasy version of ancient Egypt, where the world is flat, gods walk among men and almost everyone is white, the god Set (Gerard Butler) turns on the other side of his family, murdering his brother Osiris (Bryan Brown) and blinding his nephew Horus (Nikolaj Coster-Waldau), in order to take control of Egypt and enslave humanity. With the help of the tenacious mortal Bek (Brenton Thwaites), Horus regains one of his eyes and sets out to not only regain his full vision, but unseat his evil uncle from the throne of Egypt.
THE VERDICT: ‘Gods of Egypt’ is released in Irish cinemas this week, and has already been the cause of two bouts of controversy; the ‘white washing’ of the cast as highlighted by Daily Life and The Washington Post, and director Alex Proyas’ rant on Facebook calling critics “diseased vultures pecking at the bones of a dying carcass”. Not a good start.
The cast of the film, which includes Nikolaj-Coster-Waldau, Brenton Thwaites, Courtney Eaton, Gerard Butler, Rufus Sewell, Elodie Yung and Rachael Blake, do not do particularly well in their roles but they find a middle ground for their characters to exist in, which is neither particularly good or terribly bad. The exceptions to this are Geoffrey Rush who has a whale of a time playing a camped up version of the sun god Ra – but is sadly only on screen for mere minutes – and Chadwick Boseman, whose performance as Thoth, god of wisdom, is so utterly one note and bland that he stands out for all the wrong reasons.
Screenwriters Matt Sazama and Burk Sharpless took their inspiration from the Egyptian myth ‘The Contendings of Horus and Set’, then set this in a world where gods and men walked the earth together. There is merit to the story in its basic form, but in trying to make ‘Gods of Egyp’t an action film, all strength of this mythical tale are lost. Add to this some ill-advised attempts at humour, dreadful dialogue and too much reliance on action, and Gods of Egypt quickly falls flat.
As director, Alex Proyas seems to have set out to make ‘Transformers’ in ancient Egypt. Gods regularly suit up in animal shaped armour and take each other on in CGI fuelled battles that the audience struggles to engage with. Sound familiar? The performances in the film seem to be wilfully mediocre, with Proyas seemingly taking no interest in the characters and relying on action. As well as this, the film is poorly paced, badly edited and is so filled with CGI that it becomes a shiny assault on the senses.
In all, ‘Gods of Egypt’ is an ill-advised attempt to tell an ancient tale in a glittering CGI-filled movie. This is not an attempt to “peck to the rhythm of the consensus” as Alex Proyas so charmingly put it; ‘Gods of Egypt’ is entirely misguided. The characters are thin and underdeveloped – with the exception of Geoffrey Rush, who saves the movie from being utterly unwatchable – the screenplay is filled with bad dialogue and misguided attempts at humour, and the entire thing is tied in a dark, undistinguishable CGI bow.
RATING: 1/5
Review by Brogen Hayes