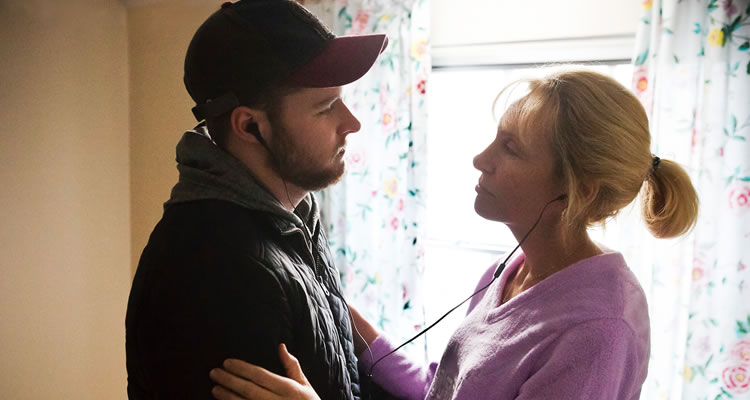 GLASSLAND: Behind The Scenes with Director Gerard Barrett

GLASSLAND, the second film from Kerry born director Gerard Barrett has been picking up praise wherever it’s played, including a Jury Prize at Sundance. Set in Dublin, GLASSLAND tells the story of a young taxi driver (Jack Reynor) who gets tangled up in the world of human trafficking while trying to save his mother (Toni Collette) from addiction.
The film opens in Irish cinemas this week and was one of the highlights at this year’s JDIFF, where it won Best Irish Film. We caught up with the director to find out more about his second film.

You had your big international debut at Sundance in January, to generally glowing reviews – are you feeling relaxed about GLASSLAND now, or are you always anxious until the film is out there for everyone to see…?
Gerard Barrett: Sundance was a beautiful experience and the film made such an impact over there. Obviously with the award etc for Jack and the reviews. The film is ready now to make its journey to cinemas and I’m incredibly proud of it. I’ve very much moved on from it and I’m handing it over now to those who go to see it, and I’m so excited for them to experience Jack, Will and Toni’s great work.

Compared to your 2013 debut feature, the €4,500-budgeted PILGRIM HILL, GLASSLAND is a major production. You’ve got Toni Collette, Jack Reynor, Will Poulter… How did you bag such a cast? Was it all down to PILGRIM HILL?
GB: PILGRIM HILL obviously had a lot to do with it. People can watch that and see my point of view on the world as a storyteller. I just wrote an intimate script for GLASSLAND and sent it to Jack, Will and Toni. Was very simple, they were my first choices and they signed on. Jack and I met on the festival circuit, I was on the road with my first feature PILGRIM HILL at the Telluride Film Festival and he was on the road with WHAT RICHARD DID at Toronto. We happened to meet in between and we both signed with the same agency the same day and from there we linked up, where I told him about my next project. We spoke about it and that was it. He has been an incredible collaborator to work with and his performance is fantastic and so mature beyond his years.
I’ve always been a fan of Toni Collette and when the opportunity came up to send her the script, I took it. Then she called me out the blue and said if I would have her then she would love to play the part. I thank her so much because she literally took a chance on a 25-year-old Irish kid she had never met and had just read his script. Toni is an unbelievable person and someone I hold very close to my heart.
In terms of Will, Will Poulter is just an incredible actor. A phenomenon. I rang my agent and said, I think Will Poulter would be amazing for this part. Within hours Will and I were on Skype, talking through the script and that was it. He was in. Following week he flew to Dublin and we started working on it more intensely, building and working through his character. His talents have no limits.

Jack Reynor picked up the Special Jury Prize at Sundance, whilst you also shared the Best Irish Film gong at the Galway Film Fleadh, and the film won Best Irish Film at JDIFF. Do the prizes matter to you?
GB: I don’t make films to win awards. If it happens it’s lovely and I can send them home to the parents in Kerry like I have done with what anything I’ve won thus far. But for me it’s about the work. In terms of the actors I work with, there is nothing more beautiful for me than to see them recognised for their work. Like Jack at Sundance, I was so thrilled for him as he really went for it with GLASSSLAND and deserves all the plaudits he receives.

Reynor’s good son is struggling to look after Collette’s troubled addict mum – where did the idea for GLASSLAND spring from?
GB: I come from rural Ireland, and after college I moved to Dublin, and the first thing that struck me was kids parenting their parents. Mothers and fathers all battling addiction and it was falling on the kids to pick up the pieces and parent them. A complete role reversal. I found it absolutely fascinating. I saw teenagers and even older children dragging their parents home, some battling drug and alcohol addiction. It was terribly sad. These children, had faces that had seen so much growing up. It was wearing the freshness of youth away from them. Put yourself in their shoes, waking up every morning, not knowing what the day was going to throw at them. And it was not just Dublin, I saw this in London, New York, Los Angeles, everywhere I traveled. Where I come from in rural Ireland, this would not be that common. So I put myself into that world, and that is when GLASSLAND was born.

GLASSLAND is in Irish cinemas from April 17th 2015