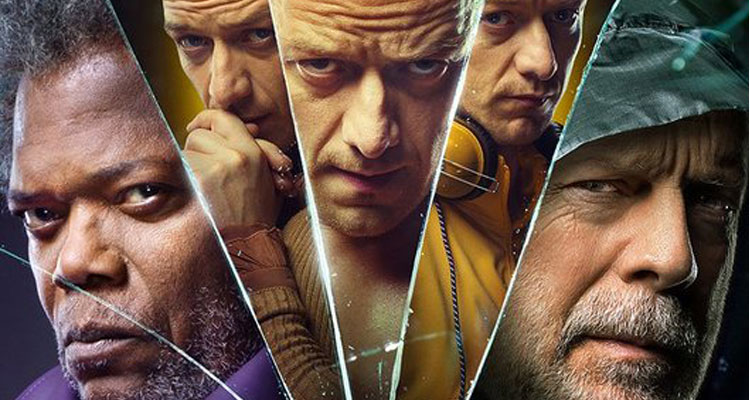 In short: Handled with care

The Plot: Having escaped, Kevin and his multiple personalities AKA The Horde (all James McAvoy) are wreaking havoc on the streets of Philadelphia. One man stands in his way: security expert David (Bruce Willis), who believes he has the strength of a superhero. 19 years earlier, he faced off against Elijah AKA Mr Glass (Samuel L. Jackson), the brittle-boned man who believed he was his nemesis, a super-villain. Kevin and David are caught during a fight and taken to a psychiatric institute where they are studied by Dr Ellie (Sarah Paulson). She wants to convince them that they’re delusional and that their apparent superpowers can be explained away by science, reason and logic. Mr Glass has other plans though and sets out to harness the most destructive of Kevin’s personalities – The Beast. Survivor Casey (Anya Taylor-Joy) may be the key to bringing Kevin back…

The Verdict: Whenever they ran into each other over the years, Samuel L. Jackson would ask M. Night Shyamalan when they were ‘doing that sequel’. 2000’s Unbreakable was not perfect by any means, but it showed potential for something greater. Box office returns dictated otherwise, but now it looks quite prescient. Pre-dating the current golden age of superhero movies, Unbreakable posited its own theory that latent superhuman powers exist within certain people. When Split came along in 2017, Shyamalan snuck in a surprise closing scene which clearly hinted at a shared cinematic universe – a Shyamalan-verse if you will. Now he draws together these two films to form Glass, a sequel that fulfils the potential of Unbreakable but also expands the complex story around Kevin and The Horde.

Shyamalan takes his time with the story, with brief action at the start before settling in to a slow-burn character study. He turns the screws on his characters several times, keeping us guessing as to whether this unlikely trio are either delusional or actually capable of the things they say. He keeps the silent Mr Glass in the dark for a large part of this, waiting for the right moment to unleash him. When the chaos comes, it’s glorious. 19 years of being institutionalised have only sharpened his mind and made him more determined. The performances here are strong and the main actors invest both physically and mentally in their characters, bouncing off each other with sparks of electricity. McAvoy in particular, who amusingly and terrifyingly switches personalities in the blink of an eye. Shyamalan also draws in corresponding characters to offer other perspectives – Casey, David’s son and Elijah’s mother. That gives it a much more rounded narrative than in either of the previous films.

There are flaws of course. Shyamalan has said that there will be no more films in this series, so Glass can be regarded as the concluding chapter of his deconstructed superhero trilogy. While it works fine as a trilogy, he teasingly – and rather frustratingly – hints at a bigger world. It’s as if he’s tearing down his own Shyamalan-verse while simultaneously building it. Just when you get the impression that he may be on to something really special here, he snatches it away from you. Not without giving the audience a brief glimpse behind the wizard’s curtain of course. While it’s frustrating, it’s also a bold move which makes Glass all the more resonant. Having gradually crept his way back into the mainstream via smaller films like The Visit, Shyamalan continues to surprise us with his trademark brand of suspense, terror and well-timed laughs. Glass is handled with care and wraps up this intriguing trilogy in style.