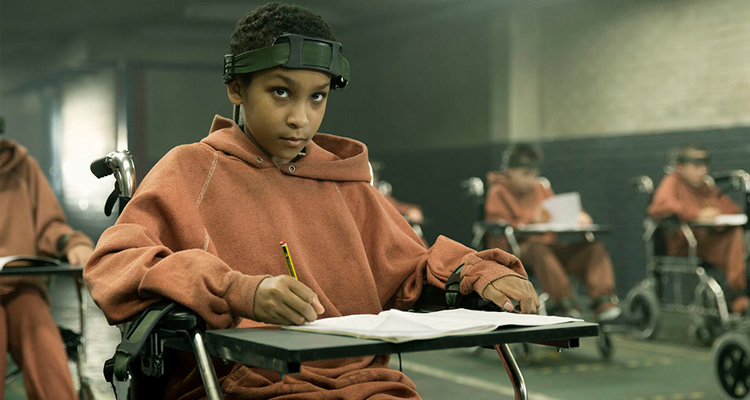 THE GIRL WITH ALL THE GIFTS – Interview with M.R. Carey

This week, ‘The Girl With All The Gifts’ is released in Irish cinemas. Starring Gemma Arterton. Paddy Considine and Glenn Close, the film is the story of Melanie (Sennia Nanua), a young girl who lives on an army base, and although she goes to classes and learns about the world, the only experience she has of real life is that adults are afraid of her. When the base is overrun by infected humans known as Hungries, Melanie and some other survivors go on the run to safety, and Melanie begins to learn the truth about herself.

‘The Girl With All The Gifts’ is based on M.R. Carey’s novel of the same name and written for the screen by the author. Movies.ie caught up with Carey to find out more about the story, and why famous comic author Mike Carey decided to go under the name of M.R. Carey for this story.

Where did the idea for ‘The Girl With All The Gifts’ come from?
M.R. Carey: It had a weird and sort of complicated genesis. I was invited to contribute a story for an anthology; Charlaine Harris and Toni Kelner do these themed anthologies every year, and the theme is always something really innocent and banal, like home improvement or family holiday. Charlaine had asked me a couple of times if I wanted to contribute, and in 2012 I said I would. The theme was school days, and the brief was write a supernatural story, a horror story or a dark fantasy with school days somewhere in the mix. Having said I would do it, I couldn’t think of a single decent idea, and I woke up one day with the idea of Melanie in my mind; just the character. I saw her sitting in a school room writing an essay about what she wanted to do when she grew up, and everything grew from that really, just that one character and the sense of who she was and where she was.

And then it grew from a short story into a novel…?
MRC: Into a novel and a screenplay simultaneously, yeah. That was the weird thing. I pitched them at the same time and got two green lights at the same time, so I was writing the noel and doing the outlines and the drafts for the movie side by side.

How challenging was that?
MRC: Actually it was really really liberating, and really exciting. It meant that I was living in that story world the whole time. A year, maybe a bit more than a year, I lived and breathed ‘The Girl With All The Gifts’, and it was finding two parallel pathways – not always parallel; sometimes divergent, sometimes convergent – but two different ways through the same story space, and two different solutions to the same set of story problems. Each one in a way illuminated the other, and it made some of the decisions much easier, actually.

In the novel, there are other human survivors called Junkers, who don’t appear in the film at all. Why did you decide to leave them out?
MRC: That’s a really good example actually. Colm [McCarthy] felt, as soon as I mentioned the Junkers actually – we were talking about the visual aesthetic, and how they would look and how they would behave on screen – we realised that we were playing into ‘Mad Max’ territory, and while that’s pretty cool territory, it sets up a completely, in a way, misleading set of expectations around the story, so we decided not to go there. The other big difference as well is that in the novel I do that thing where you jump from one point of view to another, you start off with Melanie, but you’ve got Justineau and Park and so on, and even Caldwell. In the movie, it’s just Melanie’s perspective all the way through, you don’t see or hear anything that she doesn’t see or hear, it’s her route through the story. That was because in a noel you can do that playing with perspective without losing momentum, but I am not sure you can, to the same extent, in a movie. It’s harder.

Greek myths really play a part in the film, especially with the title referring to Pandora. Where did that tie in come from?
MRC: I like stories about stories. I do tend to tell stories in which storytelling is an element, from ‘The Unwritten’ to ‘The City of Silk and Steel’ and so on. The other thing that ‘The Girl With All The Gifts’ is, is a coming of age story. You have a child protagonist who, at the start of the story – whether it’s the novel or the movie – knows nothing about the world, knows nothing about her own place in the world, really knows nothing about her own nature, and she goes on this physical journey which is also a journey of self discovery; she has to find out what the world is like, and she has to find out who she is. Because she has had so little experience, she latches hold of the stories, and she uses the stories as kind of mental crutches to explain the world to herself. In each version of the story I have used different myths to get that message across. In the short story, I used the sacrifice of Iphigenia in The Illiad, it’s Pandora in both the movie and the novel, but the novel also has some references to The Odyssey and Odysseus’ sailors being turned into swine by Cercei, which prefigures things that happen at the end. It’s about the influence that stories have on our lives; the way that stories shape our perceptions and shape our expectations, which I think is something that’s for all of us; it’s an exaggerated version of something we all do all the time.

It’s kind of terrifying that the fungus that infects humanity in ‘The Girl With All The Gifts’ is something from nature and not man made. Where did the idea of a fungal infection causing humans to turn into Hungies – not zombies!!! – and this making a species jump from ants come from?
MRC: It was a conversation that we had very very early on. In the short story I just said “It’s a virus, don’t ask awkward questions”, then when we were talking – we being me and Camille Gatin and Colm McCarthy the director – about the zombie pathogen, we thought it would be cool if it were something a bit more compelling, a bit more authentic feeling. I actually went on a little search, and I remember seeing that sequence in ‘The Secret Life of Plants’, of the fungus exploding out of the ant’s body. I couldn’t remember where I had seen it, and I couldn’t remember what it was called, so I tracked it down and I did some reading about neural hijackers, about parasites that take over your nervous system and turn you into a zombie or a robot, and it turns out that there are thousands of them. Ophiocordyceps is the best known, because of David Attenborough, but there are bacteria that do this. There are all sorts of agents in nature that are out to get us. It was a great discovery, because once you have got the idea of the fungal infection, then you have got a look for the Hungries, you have got a logic for the Hungries and some of the big visual set pieces force themselves into your mind.

You have written novels and screenplays, and you write comics under your real name Mike Carey. They are all very different ways of telling stories, which medium do you prefer?
MRC: I do, but it changes. At any given time I have a preference, but it changes over time. I think also, part of me just loves having footholds in different worlds and doing different kinds of storytelling. I think there is a trap you can fall into as a writer, which is that you end up telling the same story again and again, just with slightly different furniture, and I think when that happens you are the last person who knows about it, or they feel different to you and everyone else goes “Ooh, we’ve seen that before”. I think picking up a different medium is like picking up a different toolkit, telling the story with those tools, then you put them down and you pick up a different toolkit. I think it gives you a constantly changing perspective on what you’re doing, so it maybe inoculates you a little bit against that process of pastiching yourself.

Are we going to see a ‘The Girl With All The Gifts’ comic book at any stage in the future?
MRC: I would love to do it. I talked to Mike Perkins, who I worked with on lots and lots of different comics over the year. He’s got a very very fully rendered, realistic style that would fully lend itself to depicting Melanie’s world, but I have no plans at the moment!

You are so well known as a comic book writer under your real name Mike Carey, why did you decide to do ‘The Girl With All The Gifts’ as MR Carey?
MRC: It’s to do with the whole process of selling a novel. Calling myself MR Carey – even though it’s a really transparent pseudonym – out up a little bit of a Chinese wall between ‘The Girl With All The Gifts’ and all the other things I had done before it. It was a way of saying to buyers, especially in the big chains, “come to this with a fresh eye, don’t judge this by what’s come before, because it is different, and it is playing to a different audience”. That was the strategy. My publishers just said “Are you OK doing this under your initials?” and I said yes, but my initials are MJ; I’m Michael James Carey, and the proof copy has MJ Carey. On the day it came out they discovered there is already an MJ Carey, who is very successful in her field, which is bondage porn, so the Good Reads page for ‘The Girl With All The Gifts’ was linking directly to ‘Danielle’s Chain’, ‘Danielle’s Slave’, ‘Danielle’s Dungeon’… Obviously ‘The Girl With All The Gifts’ as a title takes on a different connotation thinking about that, so at the last stage they made it MR instead of MJ.

What’s next for you?
MRC: Apart from that prequel, I am doing a lot more screenwriting. I am actually working on a screenplay for ‘Fellside’, the novel that followed ‘The Girl With All The Gifts’, it’s a ghost story set in a women’s prison. I am doing that with the same producer and hopefully the same director, because Colm is on board for it.

‘The Girl With All The Gifts’ is released in Irish cinemas on September 23rd 2016.