Available to watch instantly at home from July 10th, SCOOB! is a brand new movie that reveals the never-before-told story of Scooby-Doo’s origins.

The film shows how one of history’s most famous friendships began when an adorable, homeless puppy met a lonesome young boy named Shaggy, and how the two of them joined forces with aspiring young detectives Fred, Velma and Daphne to become the celebrated Mystery Inc.  Now, with hundreds of cases solved and adventures shared, Scooby and the gang face the biggest and most challenging mystery of their careers: a plot that will unleash the legendary ghost dog Cerberus upon the world.  As they race to stop this “dogpocalypse,” they discover that Scooby has a secret legacy and an epic destiny greater than anyone imagined.

Gina Rodriguez, star of ‘Jane The Virgin’, voices the iconic character of Velma in the movie, Gina is no stranger to voicing animation, she’s previously lent her voice to recent cartoon hits ‘Big Mouth’, ‘Ferdinand’ & ‘Smallfoot’. In the below interview the Golden Globe winning actress talks about working with the classic Scooby Characters & reveals her favourite Scooby Snack.

Everybody knows these characters so well including you.  But this is the origin story.  Is that special for you?
I think everybody loves an origin story.  Audiences would be curious about how this group of friends got together and now they get to see that.  Being a part of the Scoob story is a true honor, especially because Velma gets to be a young Latina [LAUGHS].

The heart of the movie is a guy and his dog, which is something a lot of people around the world can relate to, whether it’s a dog or a cat or any kind of pet.  Has that played a part in your life?
Well, I had dogs all through my growing up.  We were a big dog family.  Now I have  two boys and that tradition continues.  My first rescue, Casper, I got eleven years ago, so he’s almost twelve, and he’s very special in my heart.  He had spinal surgery last year, and has recently been having some trouble walking again. My older dog, Ted, passed away about four years ago and when he passed away it was told to me, “You’re with them their whole life.  They’re not with you your whole life,”  and that kind of changed everything for me, because it made me just value every year they had and every moment I had with them.  Now I have a new baby boy—he’s almost two, and his name is Marty—and we’re looking to get a third. So I love dogs.  I’m a big, big, dog fan. 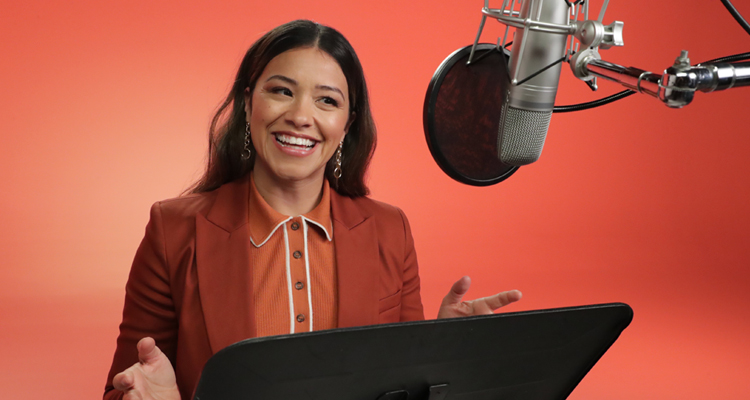 How would you compare yourself to your character Velma’s tech skills?
What I love about Velma is that she is very bright and clever and she loves to deduce and analyze any situation with care, and I’d like to think I try to do that.  Her  tech skills, though, are much more developed than mine, much more.  But it’s really fun and meaningful to be playing a character who puts importance on her education, knowledge and intellect.  It’s very cool to be playing that character.

She’s an excellent role model.
Yes, she is.  She’s a role model for me [LAUGHS], to get my act together, especially when it comes to technology.  I’m learning.

Regarding the strong relationship between Velma, Daphne and Fred, is that something that rings true for you in terms of your own long-term friendships?
Absolutely.  I have friends that I love very much.  I’m very close with one of my first-ever friends.  We’ve known each other since we were like two, and now we’re 35.  A 33-year friendship; it’s pretty incredible.  She’s from Chicago but I also have a group of women here in California.  I feel like we all have a certain strength and we can lean on each other for that strength and we all fit like a puzzle.  I think that’s what Scooby and Shaggy and the Mystery Incorporated gang does too; they all have a piece that they bring that is their individual strength and then they lean a little on the others for theirs. I feel very blessed to have it, for sure.

You have a significant amount of animation to your credit.  You were in ‘Smallfoot’ and ‘Ferdinand’ and you’re the voice of Carmen Sandiego.  Is there anything about your process you’d like to talk about?  Like taking off your shoes and moving around in the recording booth?
I’ve definitely done all those things.  Because I move a lot there’s a barre I love to use, to hold on to.  It’s like a ballet barre, so you can kind of bounce around and not hit the microphones and fall.  I really utilize my balance barre, my ballerina barre [LAUGHS].  But I do find the process of making something that doesn’t exist quite fascinating, because before there’s a picture there’s your imagination.  I find it one of the greatest tools,  using one’s imagination and just creating the world around you.  You’re not acting with anybody but your imagination.  In some ways it’s like your earliest form of playing, like when you were a child, and I find that to be really fascinating.

What was it like working with SCOOB! director Tony Cervone?
Tony is remarkable.  He’s an incredible artist himself, who is artist-friendly and very collaborative.  He’s inclusive in the process so you do feel like you are corralling, creating and inventing this character with him.  Seeing that Velma is a character that already exists, it’s about both paying homage to the Velma that has been around and that we all know, and also bringing a little newness to her.  With Tony, that was an exciting process to go through.   Also, I enjoy making art with people that are kind.  To me he’s a very kind man, and I think that that’s the most important quality.  It allows you to be the best version of yourself when you’re working with people that are kind.

Lastly, what are your go-to Scooby snacks?
That would be hot Cheetos.

SCOOB! is available to stream at home on PVOD (Premium Video On Demand) from July 10th from participating digital retailers.