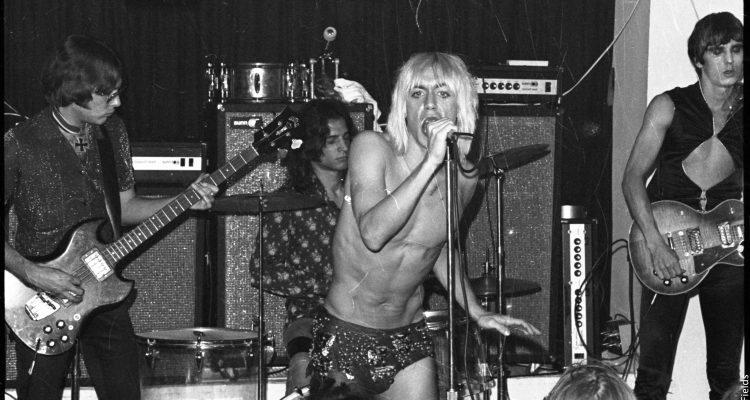 GIMME DANGER (USA/TBC/108mins)
Directed by Jim Jarmusch. Starring Iggy Pop, Mike Watt, Ron Asheton, Scott Asheton, James Williamson
THE PLOT: Filmmaker and self-confessed fan of The Stooges, Jim Jarmusch takes a look back over the career of the band that spawned three beloved albums, before they began to fall apart in 1973.
THE VERDICT: ‘Gimme Danger’ is titled after a song by The Stooges, and sums up the feeling that comes across throughout the film; The Stooges – in particular James Osterberg, better known by his stage name Iggy Pop – always felt as though they were searching for something more, something just out of their reach, something dangerous.
The film is made up if interviews with Iggy Pop and other members of The Stooges; Scott Asheton, Mike Watt and James Williamson, as well as music manager Danny Fields, Kathy Asheton; sister of Ron and Scott Asheton and Steve Mackay, as well as archive footage of The Stooges gigs both in the 1970s and more recently, some small bursts of animation, and clips that underline the controlled and prim era that The Stooges were so desperate to break out of; the 1950s and 1960s. All of this comes together to give a strong picture of what it was like to be in The Stooges, and what they were trying to do, but although Iggy Pop is an incredible raconteur, it is hard to imagine this film being for anyone but those who consider themselves fans of the band. ‘Gimme Danger’ would definitely have benefitted by casting a wider net than those directly involved with the band, and having other artists talk about how they were influenced by The Stooges would have lent the film depth and a feeling of true importance.
Although Jim Jarmusch is a fan of The Stooges, and is aware of the numerous bands that The Stooges influenced, it is clear that he is not trying to make a hagiography, and nor does Iggy Pop want him to. Pop is all too happy to talk about the bad days of the band as well as the good, and it is this honesty that makes the film so interesting. Archive footage is skilfully woven into the film to give a feel of the manic energy that Iggy and The Stooges had when performing live, but even though the film is well put together, and gives a feel of the anti-establishment movement that was happening in the world at the time, there are times when the pacing of the film struggles to mimic the energy of the band of whom it is telling the story, and at 108 minutes long, begins to feel its length.
In all, ‘Gimme Danger’ is unlikely to win any new fans over to the side of The Stooges, but it is an interesting look back at an influential band that fell apart too soon. Iggy Pop is a great storyteller, but Gimme Danger is a film made for the fans of The Stooges, and while there is nothing inherently wrong with that, there is a deeper story to be told about the band and the era that they came from, and ‘Gimme Danger’ misses out on this.
RATING: 3/5
Review by Brogen Hayes

Review by Brogen Hayes
3
For fans only