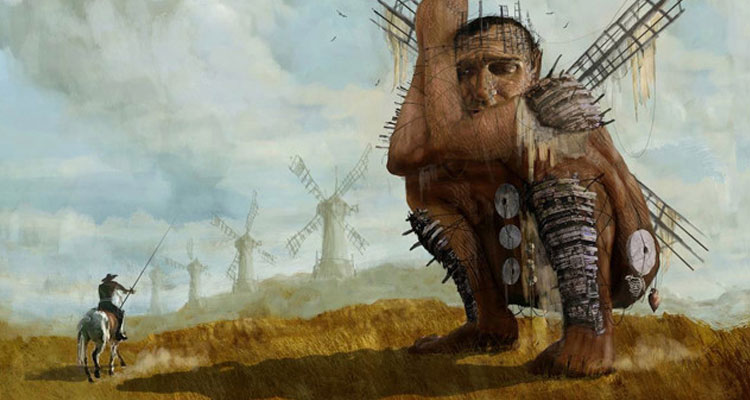 Ex-Monty Pythonite and visionary filmmaker Terry Gilliam (‘Fear and Loathing In Las Vegas,’ ‘Twelve Monkeys,’ ‘Time Bandits,’ ‘Brazil’,) has finally begun filming on his long-gestating passion project ‘The Man Who Killed Don Quixote,’ according to the folks over at Indiewire.

A modern and satirical twist on Miguel de Cervantes’s novel, the film stars Adam Driver as “a jaded commercials director who travels to Spain for a shoot and comes across a gypsy who gives a copy of his student film – a lyrical re-working of the Don Quixote story set in a quaint old Spanish village. Moved by the discovery, Toby sets off on a bizarre road trip to find the little village where the student film was shot and gets caught up in a series of catastrophes.” Jonathan Pryce will Don Quixote, with Olga Kurylenko, Rossy de Palma and Stellan Skarsgård on board for supporting roles.

Gilliam has being trying to get his film made since 1998, and filming started in 2000 with Johnny Depp and Jean Rochefort in the leads roles. However, a series of problems plagued the production, bringing everything to a halt. Gilliam was forced to abandon the $32.1M film and release the documentary of disasters, ‘Lost In La Mancha’ instead.

In the 17 years since, the cast has churned through the likes of Michael Palin, Robert Duvall, Jack O’ Connell, Ewan McGregor, and the late John Hurt.