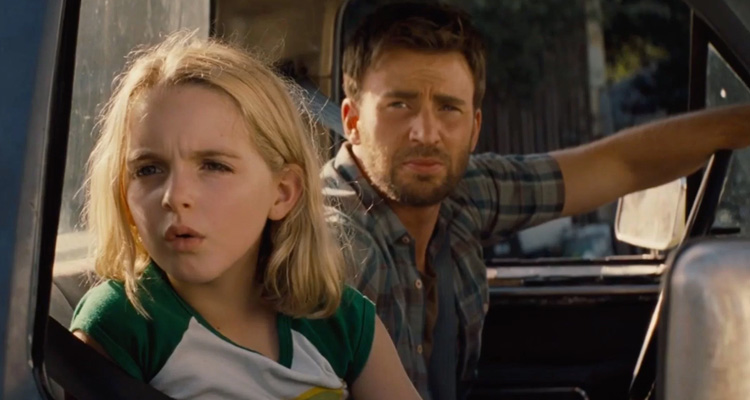 GIFTED (USA/12A/101 mins)
Directed by Marc Webb. Starring Chris Evans, Mckenna Grace, Lindsay Duncan, Jenny Slate, Octavia Spencer.
THE PLOT: Freelance boat repairer Frank (Chris Evans) lives with his niece, a precocious 7-year-old named Mary (Mckenna Grace) and their one-eyed cat Fred. She’s sassy and smart to boot. Home-schooled until now, Frank thinks it’s time for her to learn about the outside world and experience life in a normal school. From day one though, teacher Bonnie (Jenny Slate) spots something different about Mary. She’s way ahead of the rest of the class when it comes to maths. Light years in fact. Thinking that Mary might be gifted, she approaches Frank. It’s then that the secret history of Mary’s origins come to light. The re-appearance of Frank’s mother Evelyn (Lindsay Duncan) only complicates the situation, as she believes that Mary would be better off with her. A custody battle begins…
THE VERDICT: ‘Gifted’ sees a return to small-scale, character-based dramas for director Marc Webb. With a new ‘Spider-Man’ in town, that’s not a bad thing. He’s better off telling these smaller stories with grand themes. ‘Gifted’ certainly has some grand themes, about parenthood, intelligence, ambition and the bond of love that can be tested but not broken. Written by Tom Flynn, ‘Gifted’ explores the imperfect relationship between Frank and Mary. Yes, they irritate each other but there’s a knowing respect and acceptance of each other’s imperfections.
Films about child prodigies are not exactly new. Webb plays up the familiarity of this story, rather than try to reverse engineer it. ‘(500) Days Of Summer’ this ain’t. The film is mostly structured around a clichéd court battle between Frank and Evelyn, with even their lawyers getting in on the act. There’s a danger that this could end up being weepie TV-movie-of-the-week stuff, with a child’s future hanging in the balance. Thankfully, Webb manages to just about steer it in the right direction and keep it grounded and schmaltz-free.
10-year-old Grace is the real find here. She manages to be both a child and an adult at the same time, wise beyond her years. Her performance echoes that of Dakota Fanning in ‘I Am Sam’. Her interplay with a spot-on Evans is a joy to watch and they become the beating heart of the film. One scene in a hospital (wait for it) sums up their chemistry perfectly. Duncan also shrugs off any suggestion that she’s playing a scheming grandmother by bringing depth and past regret to her performance. You can see early on where the film is ultimately heading, but the journey is what counts. It may be familiar, but ‘Gifted’ is charming, sweet and heart-felt. It’s also got the best child performance since Jacob Tremblay in ‘Room’.
RATING: 3/5
Review by Gareth O’Connor