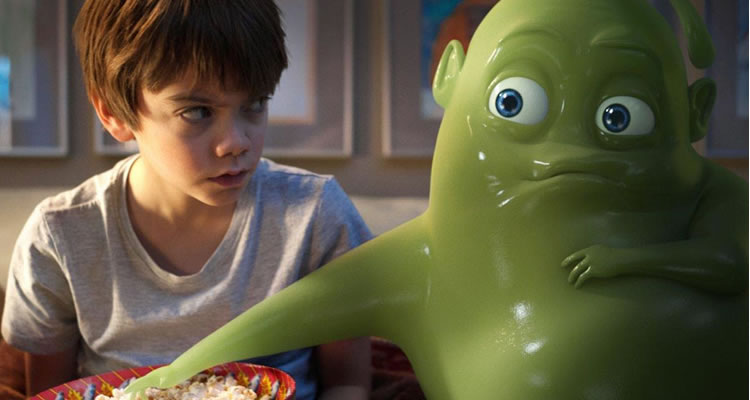 GHOSTHUNTERS: ON ICY TRAILS (Germany | Austria | Ireland/PG/99mins)
Directed by Tobi Baumann. Starring Milo Parker, Anke Engelke, Bastian Pastewka, Christian Tramitz, Karoline Herfurth, Christian Ulmen, Julia Koschitz, Ruby O. Fee.
THE PLOT: Eleven year old Tom Thompson (Milo Parker) has a crippling fear of almost everything. When he discovers a ghost in his basement, his neighbour tells him to seek out ghosthunter Hetty Cuminseed (Anke Engelke). Hetty has been recently suspended from her job at the Central Ghosthunting Institute, and initially turns Tom’s request down, but soon realises that she must team up with Tom and his new ghostly friend in order to save the world from a much bigger threat.
THE VERDICT: On paper, it seems that GHOSTHUNTERS: ON ICY TRAILS is a great idea for a kids movie. Combining elements from ‘Ghostbusters’, ‘Harry Potter’ and ‘RIPD’ – as well as culling some famous lines from ‘Die Hard’ and ‘Scarface’ – does not always work on screen however. Add to this some truly terrible acting, dodgy CGI and a feeling of familiarity, and GHOSTHUNTERS: ON ICY TRAILS goes from good idea to a very very bad one indeed.
The cast vary in terms of their acting ability. Milo Parker, for the most part, manages to be the heart and soul of the film, and gives a surprisingly good performance. Anke Engelke also does relatively well as the impatient and disillusioned Hatty Cuminseed. With the exception of Amy Huberman in a small role, it seems the rest of the cast are rather incapable of giving a strong or believable performance, with Christian Ulmen as Tom’s father, and Ruby O. Fee as Tom’s sister standing out as truly wooden and unbelievable.
The story, as mentioned, feels familiar but this could have been forgiven is there was something extraordinary at the heart of the screenplay, which was written by Tobi Baumann, Murmel Clausen, Mike O’Leary,Martin Ritzenhoff, Roland Slawik and Christian Tramitz. Instead, the film feels a little like The Spiderwick Chronicles, Harry Potter, Ghostbusters and a kids version of RIPD were put into a blender, and Ghosthunters was the thing that emerged. There are some lovely moments scattered throughout the film – such as the LEDS ghosts, who care for the lonely – but these are so few and far between that the rest of the film feels derivative, familiar and uninspired.
Director Tobi Baumann does not seem to have done very much for the film; the pacing is rather messy, some of the performances are absolutely cringeworthy, and there is little here to keep the little ‘uns engaged, never mind the parents who have to sit through the film in 3D. Let’s just be grateful that the film was not in 3D.
In all, GHOSTHUNTERS: ON ICY TRAILS works incredibly well on paper, but on screen it is a film populated with terrible performances that is familiar, derivative and frankly, not very good.
RATING: 1/5
Review by Brogen Hayes