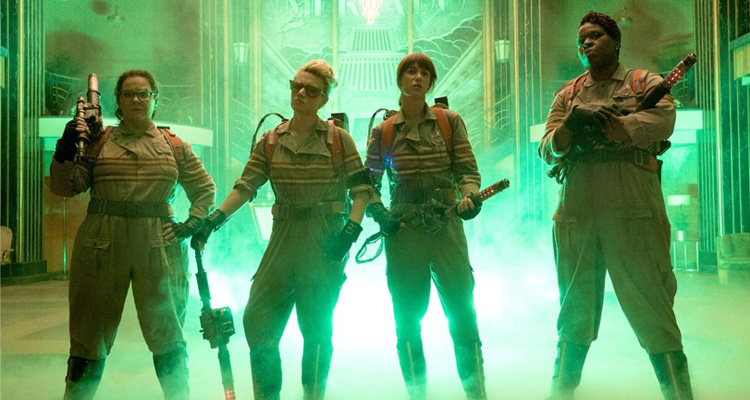 GHOSTBUSTERS (USA/12A/156mins)
Directed by Paul Feig. Starring Melissa McCarthy, Kristen Wiig, Kate McKinnon, Leslie Jones, Chris Hemsworth, Andy Garcia, Karan Soni, Bill Murray, Ed Begley Jr., Charles Dance, Zach Woods.
THE PLOT: With her academic career about to take a giant leap forward, as the dean (Dance) promises a bright future ahead, uptight Erin Gilbert (Wiig) is more than a little appalled when she discovers that an early collaborative book touting the existence of supernatural activity has been reprinted by her former friend, Abby Yates (McCarthy). The latter still believes in ghosts, and when she promises to cease and desist with the reprinting the book in return for Erin coming out on an urgent house call, the old duo quickly realise that, yep, New York has a new ghost infestation. And it’s getting worse by the day.
Pulling together a ragbag team – Abby bringing along her nutty professor assistant (McKinnon), and subway worker Patty (Jones) – the media quickly dubs this fearsome feline foursome tackling the poltergeist phenomena Ghostbusters. Which isn’t meant to be entirely flattering, especially when New York’s mayor (Garcia) convinces them that his debunking their regular findings is important for the city’s sanity…
THE VERDICT: There’s an hour of blissful, smart, silly comedy to be had in this long-gestating and troubled update of’Ghostbusters’, but that 60 minutes of fun is all mixed up with another hour of, well, meh.
On the plus side, director Paul Feig (‘Freaks & Geeks’, ‘Bridesmaids’, etc) casts all his supporting players with top-of-the-range funny folk, has two very fine leading comediennes in Wiig and McCarthy, garners some hilarious Pitt-worthy beefcake parody from Chris Hemsworth, and is savvy enough to be aware of the remake stakes, the pop culture references, and the audience. ‘Ghostbusters’ works best at letting us in on the gags.
On the downside, ‘SNL’ also-ran Katie McKinnon’s contribution to the main team is a misguided cross between Molly Ringwald and Poochie, the talking dog, from ‘The Simpsons’, the cameos from original ‘Ghostbusters’ Bill Murray, Dan Aykroyd (one of the executive producers) and Ernie Hudson fail to spark (ditto Weaver), the bombastic closing battle is largely just that – bombastic – and, well, there’s at least an hour here that could have been jettisoned.
When McCarthy and Wiig close with the double-tag “Well, that ain’t terrible” and “No, that ain’t terrible at all”, they may be having fun with the audience, but, ultimately, you are left with the impression that everyone here simply knew they had bitten off more than they could chew.
RATING: 3/5
Review by Paul Byrne