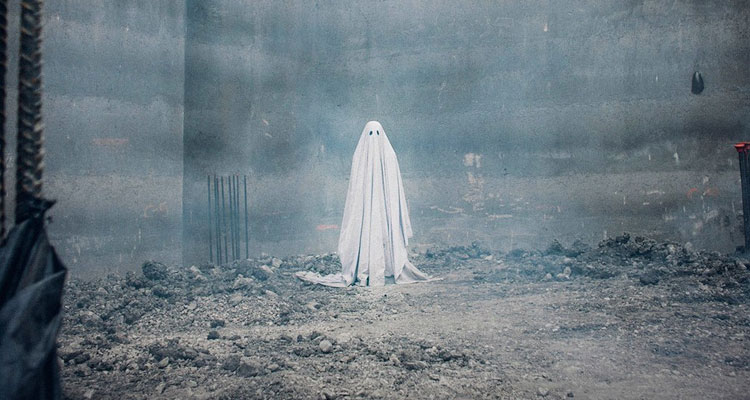 A GHOST STORY (USA/12A/92 mins)
Directed by David Lowery. Starring Casey Affleck, Rooney Mara.
THE PLOT: C (Casey Affleck) and his wife M (Rooney Mara) live in a small house. Their marriage is imperfect, but they deeply love each other. One day, C dies in a car accident. But his life isn’t over yet. He wakes up in a hospital as a ghost and returns to the house draped in a white sheet with two black holes for eyes – a child’s Hallowe’en costume, so to speak. He observes C’s grieving process, while she is unaware of his presence. Bound to the house, he is unable to communicate with her though. He’s only able to communicate with the mournful ghost in the neighbouring house, who is waiting for someone. As time passes, C has to accept the cyclical nature of life…
THE VERDICT: Imagine if Terrence Malick remade ‘Ghost’. That might give you some idea as to what to expect from ‘A Ghost Story’. However, that’s only scratching the surface of this metaphysical reflection on life, death, loss and everything in between. This isn’t your average ghost story. In fact, it’s a true original and is in a class of its own. It’s a marmite movie though – one that you’ll either accept readily with a leap of faith or reject outright as being too slow and oblique.
David Lowery’s latest film is a departure from last year’s Disney remake ‘Pete’s Dragon’, with the director reuniting with his Ain’t Them Bodies Saints co-stars. Malick is an apt comparison, as Lowery often tips his director’s megaphone at him. The only things missing from ‘A Ghost Story’ are the internal monologues and gurgling streams. However, Lowery makes the film very much his own. Lowery doesn’t provide any easy answers as to what’s going on, but there are clues throughout the film – including one similar to ‘Interstellar’. The much talked about single-take pie-eating scene by Mara serves a purpose too.
Shooting in the boxy academy ratio, Lowery uses his camera to keep his characters confined in their own prisons of grief, anger or frustration. This is not a horror film per se, but more a reversal of the standard ghost story and then taking it to another level. It’s told from the ghost’s point-of-view, as C observes life going on without him… and yet he is unable to do anything about it. Despite the sombre mood of the film, it’s surprisingly funny at times. To say anymore would be to spoil the film’s many surprises. It’s enough to say that the key to the film’s meaning is in the poster tagline – it’s all about time.
‘A Ghost Story’ will likely impress and frustrate people in equal measure, but it still demands attention. How often is there a ghost film that is truly haunting and makes you reflect on your own life? That doesn’t resort to cheap shocks or scares, that isn’t predictable, that doesn’t give in to audience expectations? That makes ‘A Ghost Story’ very rare indeed.
RATING: 4 / 5
Review by Gareth O’Connor