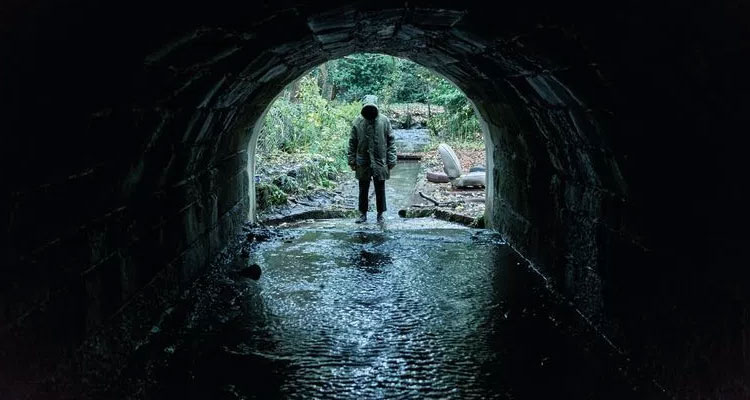 GHOST STORIES (UK / 16 / 98 mins)
Directed by Jeremy Dyson, Andy Nyman. Starring Andy Nyman, Martin Freeman, Paul Whitehouse, Alex Lawther.
THE PLOT: Psychic debunker Professor Goodman (Andy Nyman) has made a career out of exposing charlatans on his TV show. However, he’s challenged by an esteemed colleague to investigate three unexplained cases of supernatural phenomena – which might just convince him that what happened is very real. In the first case, night watchman Tony (Paul Whitehouse) sees a figure in the dark, dingy corridors of a former sanatorium. Next up is Simon (Alex Lawther), a young man who hits someone (something?) when driving home through a forest. Finally, Mike (Martin Freeman) experiences bumps in the night in his designer house…
THE VERDICT: The British horror anthology has a long and distinguished history. Ealing made a surprise entry with their unsettling ‘Dead Of Night’, but it was Amicus in the 1960s – 1970s that perfected the art of weaving tales of terror into a framing narrative which makes sense. This is what brings us to Ghost Stories, a modern take on this intriguing horror sub-genre. It’s based on the stage play by Jeremy Dyson, who co-writes and directs here with Andy Nyman. They make effective use of cinematic trickery so that it doesn’t come across as resembling its stagey origins too much.
The jump scares are there – but done in such a way that they’re not telegraphed in advance to the audience, thereby lessening their impact (yes, looking at you ‘Paranormal Activity’). Part of the charm of ‘Ghost Stories’ is that it doesn’t take its audience for granted. Dyson and Nyman assume the audience knows the conventions of not only a horror film, but also an anthology film. The three stories are short and to the point of being almost incidental, rather than meaningful. After each one ends, you expect a follow-up or a resolution. But no… They become part of the fabric of the overall film, weaving themselves into Professor Goodman’s own story and only adding to the growing sense of mystery and paranoia.
Dyson and Nyman’s direction here is quite strong, never letting up on this terror-filled quest into the dark recesses of the human mind. By playing around with the anticipated conventions while simultaneously honouring them, the film pushes itself from what could have been a respectable genre effort into something better, darker and more disturbing. The heightened music by Haim Frank Ilfman underscores the scares, but suggests a dark overtone to the unfolding events. The performances are all well-judged too, so you never quite know what’s really going on with these characters. ‘Ghost Stories’ is a film about night terrors of the most unsettling kind, is proper scary and doesn’t beat you over the head with its spookiness. Don’t sit too comfortably. This film might just have you looking over your shoulder at the hooded figure in the distance…
Rating: 4 / 5
Review by Gareth O’Connor