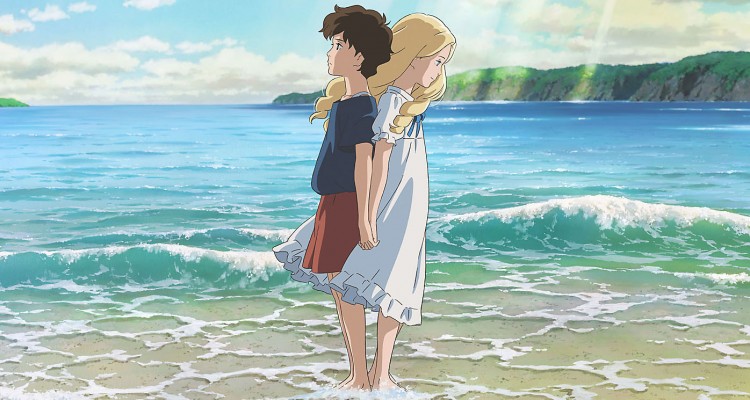 Ghost stories in the Movies – from ‘Ghost’ to ‘Ghostbusters’

‘When Marnie Was There’ is released in Irish cinemas this week. The new animated film by Studio Ghibli, ‘When Marnie Was There’ is the story of a young girl who is fostered by a new family. Miserable in her new home, Anna (Hailee Steinfeld) befriends a young girl named Marnie (Kiernan Shipka) but as their friendship blossoms, Anna begins to fear that Marnie may not be real after all.

‘When Marnie Was There’ was nominated for an Oscar earlier this year, and is a beautiful tale about the friendship between two young people, even though one of them may be a ghost. To celebrate the release of ‘When Marnie Was There’, Movies.ie has taken a look back over some of the best ghost stories in the movies… Movies that are not necessarily horror flicks.

GHOST
Sam Wheat (Patrick Swayze) and Molly Jensen (Demi Moore) are very much in love, so when Sam is killed one night in a mugging gone wrong, it is not surprising that he wants to stay with Molly and refuses to move on. When he encounters Oda Mae (Whoopi Goldberg) a fake medium who can actually hear him, Sam is determined to solve the mystery of why he was killed, and save Molly from a similar fate.
‘Ghost’ is a mystery, thriller and a romantic drama all wrapped up into one. Warm and sweet, ‘Ghost’ is a film that cemented Patrick Swayze’s place as a romantic lead, and proves that not all ghost stories have to be about jumps and scares.

THE SIXTH SENSE
Although M. Night Shymalan seems to have lost his touch as a master of mystery and eerie stories, ‘The Sixth Sense’ is still one of his most beloved and talked about films. Bruce Willis plays Dr Malcolm Crowe, a child psychologist who starts seeing a new patient, Cole (Haley Joel Osment). After Cole confesses that he sees ghosts, Crowe convinces him to interact with the spirits he encounters, and the two end up saving those who have been in danger. The trouble is that Crowe does not suspect that a violent attack on his home has had a devastating effect on him.
‘The Sixth Sense’ was Shymalan’s breakout as a director, and catapulted young Haley Joel Osment to superstardom. As well as this, the film was one of the most talked about of 1999, and the phrase “I see dead people” has been parodied many many times. ‘The Sixth Sense’ is another film about ghosts that is not exactly full of scares, but plays with mystery, intrigue and audience expectations.

THE OTHERS
Another film that turns expectations on their heads is the Nicole Kidman film ‘The Others’. Directed by Alejandro Amenábar, ‘The Others’ tells the story of Grace Stewart (Kidman) who lives with her two young children in a remote country house in the aftermath of World War II. Convinced there is an otherworldly presence in the house, Grace is determined to see the intruders off and keep the house for herself and her children, but as events become more and more unnerving, the truth begins to emerge.
‘The Others’ is a tense and fun ghost story, and one that is more like a gothic, supernatural horror than the romantic and mysterious films mentioned above. That said, ‘The Others’ is still filled with mystery and intrigue, but has a smart and startling twist.

GHOSTBUSTERS
After being fired from their jobs as college professors, parapsychologists Peter Venkman (Bill Murray), Raymond Stantz (Dan Aykroyd), and Egon Spengler (Harold Ramis) set up their own business; removing ghosts from unwanted places. One of their first clients is cellist Dana Barrett (Sigourney Weaver), whose apartment is possessed by a demonic spirit named Zuul. Although the Ghostbusters have more pressing issues on their hands, they soon realise that the rise in paranormal activity in New York City is all linked, and set out to destroy the source.
The subject of a remake coming later this year, ‘Ghostbusters’ is infectiously fun with strong comedic performances and enough jumps scattered throughout the film for it to be the right amount of scary. The screenplay is endlessly quotable and as well as spawning a sequel ‘Ghostbusters’ has been made into an animated TV show, video games and gave us the musical earworm by Ray Parker Jr; “Ghostbusters”.

CASPER
Starring Christina Ricci, Bill Pullman and Eric Idle, the film follows Casper (Malachi Pearson) as he haunts a crumbling mansion. Falling for the teenage Kat (Ricci), Casper sets events in motion for Kat and her father to move into the house, and the two soon become friends. When Kat learns that Casper has no memory of his life as a human, she sets out to find out more about his life and death, only to find a machine that could potentially bring him back to life.
First created as an animated character in the 1930s, Casper the Friendly Ghost had his own movie made back in 1995; one that gave Casper his very own love story, and made sure to err on the side of friendship rather than scares. Although the film was not incredibly well received, it went on to spawn two direct to video prequels and an animated series, although plans for ‘Casper 2’ were ultimately scrapped.

Honourable mentions to: ‘The Frighteners’ and ‘Beetle Juice’.

‘When Marnie Was There’ is released in Irish cinemas on June 10th 2016. Watch the trailer below…