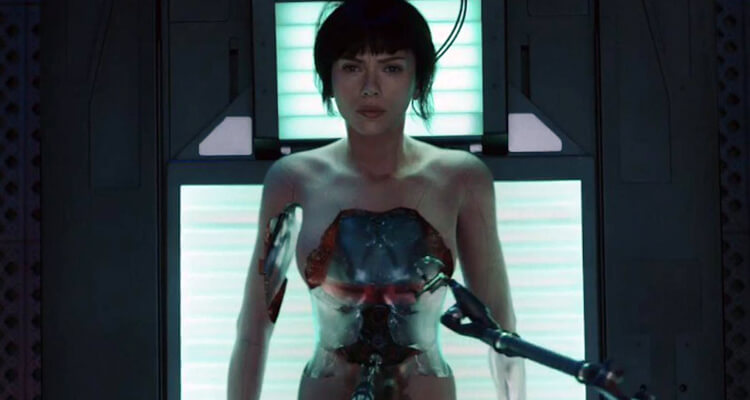 Ghost in the Shell

GHOST IN THE SHELL (USA/15A/106mins)
Directed by Rupert Sanders. Starring Scarlett Johansson, Pilou Asbæk, Juliette Binoche, Anamaria Marinca, Michael Carmen Pitt.
THE PLOT: In a future where humans are cybernetically enhancing themselves, Major Mira Killian (Scarlett Johansson) is the first of her kind; a human brain in a fully synthetic robotic body. A year after her rebirth as the perfect weapon, Major and the taskforce of Section 9 are tasked with protecting Hanka Robotics’ technology from attack by the mysterious Kuze (Michael Carmen Pitt); a mission that has personal repercussions for Major and the past she no longer remembers.
THE VERDICT: ‘Ghost in the Shell’ first appeared as Manga in 1989, and the story has gone on to be told in Anime, TV and films, but this new version is the first live action telling of the tale, and is not without its controversies.
Scarlett Johansson leads the cast as the robot/human hybrid Major, and it is her that the title refers to; the “ghost in the shell” being a human brain in a synthetic body. Johansson does well in the role of Major, remaining true to her calling as the perfect weapon, but allowing emotion and confusion to shine through as “glitches” – memories of her past – begin to plague her. Pilou Asbæk plays Major’s right hand man Batou, and the two have some sweet and gentle moments together, and work well together as a crime fighting team. Michael Carmen Pitt plays the villainous Kuze, and obviously has fun with this over the top villain, and breathes life into the role. Juliette Binoche plays Dr. Ouelet, and brings a gentleness to Major’s world, filling the role of mother figure. The rest of the cast features ‘Beat’ Takeshi Kitano, Chin Han, Danusia Samal, Peter Ferdinando and Anamaria Marinca.
The story, written for the screen by Jamie Moss and William Wheeler, tells the story of Major’s transition rather quickly, and gets it out of the way so the real story can begin. Although it seems as though Major’s past has been forgotten for the first hour of the film, it is then that the story begins to become personal for the central character, and things begin to change for her, and for us. There are times when ‘Ghost in the Shell’ feels a little derivative of past films including ‘The Matrix’, ‘Minority Report’ and ‘RoboCop’, but this was bound to be the case, since other stories have been inspired by ‘Ghost in the Shell’ since it first gained popularity. Sadly, this does give the film a familiar, almost derivative feeling, which cannot be avoided.
Director Rupert Sanders obviously threw himself wholeheartedly into his first feature length directing job since ‘Snow White and the Huntsman’, and his passion for the project shows. The world of the film feels fully realised and the performances are strong, but there are times when the film struggles to keep the pacing going, and to shake off the feeling that we have seen this world, and a story very like it, before. The visuals of the film are well realised, however, and the film manages to handle the controversy that came with casting a non-Asian actress in the lead role rather well.
In all, ‘Ghost in the Shell’ looks good, has a strong story and an interesting world. Where the film struggles, however, is shaking off the feeling that we are already familiar with the world of the movie, as well as the idea that this film was created to set up a franchise that will delve deeper into Major’s past. Still, there is fun to be had with ‘Ghost in the Shell’, if you can put everything else to the back of your mind.
RATING: 3.5/5
Review by Brogen Hayes