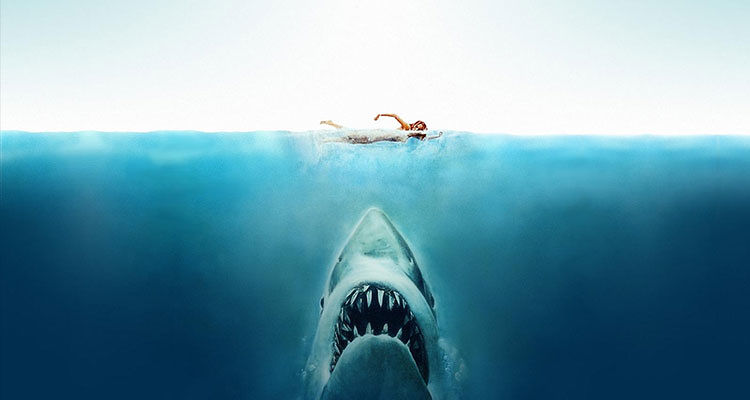 Get out of the water! Movies about the ocean… From Jaws to The Poseidon Adventure

This week Blake Lively faces off with a killer shark in ‘The Shallows’, as she tries desperately to get out of the water and to the safety of land, just metres away.

Lively’s turn in this shark survival thriller has got us thinking about other movies about the ocean, and just how scary those briny, unexplored depths can be…

JAWS
The classic tale of man vs shark has been told many times, but none is so spectacular, frightening and suspenseful as Steven Speilberg’s tale of Amity Island and the 25 foot long shark that terrorises it. Now considered to be one of the greatest films ever made, ‘Jaws’ had a troubled shoot that saw actors constantly sea sick and prop sharks filling with water and changing shape. Of course, being the master filmmaker that he is, Speilberg used the delays to refine the script and, since the prop sharks were so much trouble, used them in a more sparing way, meaning the shark was often only hinted at, and therefore ramping up the fear factor throughout the film. We certainly think twice about getting into the water after our annual ‘Jaws’ fest!

SPHERE
The complicated and weird ‘Sphere’ may not have been well received by critics at the time of its release in 1998 – and it may not actually be a smart of particularly good movie – but there is one thing that ‘Sphere’ does incredibly well; make us fear the ocean. A team of experts is dispatched to explore an alien spacecraft found on the bottom of the Pacific Ocean, but when they get there, they discover a mysterious sphere of liquid floating in the spacecraft’s interior. As the crew try to find out more about the sphere itself, tragedies including jellyfish and giant squid attacks befall them, making them doubt their sanity and the strength of their own fears.

Panned by critics, ‘Sphere’ certainly has a lot of problems, but it’s tense examination of a spacecraft in a vast and mostly unexplored area of our planet certainly made us feel claustrophobic, and reminds us of just how scary the unknown can be.

THE PERFECT STORM
Based on a true story, ‘The Perfect Storm’ stars George Clooney, Mark Wahlberg and John C. Reilly as fishermen aboard the Andrea Gail. When they left their home in Massachusetts in search of a late season haul, the crew left a gathering thunderstorm in their wake but the further they get from home, the worse the weather gets.

Directed by Wolfgang Petersen, ‘The Perfect Storm’ tells the story of what happens when a small vessel is forced to fend for itself in a massive storm that quickly turns into a hurricane, and through it’s powerful final scenes, reminded us just how scary the weather can be, and the vastness of the ocean when you are all alone. Frightening stuff!

THE POSEIDON ADVENTURE
The sea is scary, vast and ever changing, but you’re safe in a boat right? Wrong! Based on the novel by Paul Gallico, ‘The Poseidon Adventure’ is the story of an ageing ocean liner on her last voyage before being scrapped, which is hit by a 60mph wave and capsizes, trapping the passengers on a doomed ship. Of course, the adventure is now survival, and as the stricken ship struggles and rescuers seem to take forever to arrive, survival is not as easy as it sounds.

Mercilessly lampooned in the years since its release, ‘The Poseidon Adventure’ was a massive hit back in 1972, and went on to win two Academy Awards. Wolfgang Petersen’s remake in 2006 was not so well received however, but both films – as well as ‘Beyond the Poseidon Adventure’ – made sure to remind audiences that just because you are on a boat, does not mean that the ocean is safe. We will be sticking to dry land from now on, just in case!

THE HUNT FOR RED OCTOBER
So far we have realised that the water is not safe whether you are on it or in it, but how about under the waves? ‘The Hunt for Red October’ tells the story of a Soviet naval captain at the end of the Cold War, who wants to defect to America and take the newest and most advanced nuclear submarine – Red October – in the Soviet fleet with him. What follows is a tense thriller set under the waves, as the Soviet Navy sets out to sink Red October, and the US tries to bring the submarine safely into their waters.

Based on the novel of the same name by Tom Clancy, it is clear that ‘The Hunt for Red October’ was always going to be a taught thriller with a happy-ish ending, but the tense scene in an underwater canyon where the sub is being pursued, and Red October’s technology begins to fail reminds audiences of just how dark and claustrophobic it can be under the sea… ‘The Little Mermaid’ this ain’t!!

Do you have a favourite movie about the perils of the ocean? Let us know in the comments below…

‘The Shallows’ is released in Irish cinemas on August 12th 2016. Watch the trailer below…