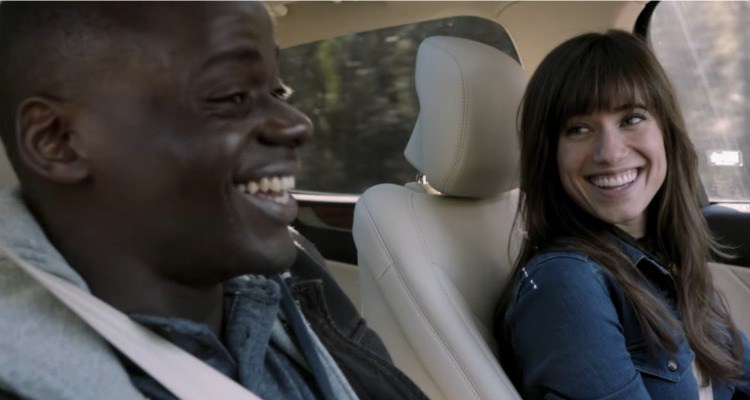 GET OUT (USA/15A/104mins)
Directed by Jordan Peele. Starring Daniel Kayuula, Allison Williams, Catherine Kenner, Bradley Whitford, Caleb Landry Jones.
THE PLOT: Chris (Daniel Kaluuya) and his girlfriend Rose (Allison Williams) travel to Rose’s family home for Chris to meet her parents and younger brother Jeremy (Caleb Landry Jones). A party springs up around them in honour of Rose’s grandfather, and it is not long before Chris realises that there is not only something terribly wrong with the African-American housekeeper and groundsman at the family home, but also the way these new party guests react to him.
THE VERDICT: ‘Get Out’ is the feature debut from Jordan Peele, and is a marked change of pace for the filmmaker, who is known for his comedic partnerships with Keegan-Michael Key. Not only has Peele made an engrossing thriller in ‘Get Out’, but he has also made a fascinating film that comments on the still unequal relationship between white and black people in the US.
Daniel Kaluuya leads the cast as the African-American Chris, who not only feels like a fish out of water in a house where the only other black people are “the help”, but also feels that something is very wrong on a deeper level. Kaluuya is incredibly strong as Chris, making him a character with understandable reservations, but easily managing to convey his bewilderment and fears at the changes to the atmosphere in the house. Allison Williams, in her feature debut, makes Rose a character that seems like the relaxed liberal daughter of a family struggling with white guilt, but also manages to convey a darker undertone to the character that she has a lot of fun with in the final act. Catherine Keener obviously has fun with the twisted Missy, Bradley Whitford makes Dean a man who outwardly tries too hard to befriend Chris, but is hiding a terrible secret. Lil Rel Howery is wonderfull as Chris’ TSA agent best friend, and Stephen Root brings the gravitas and the creep factor as blind art dealer Jim Hudson.
Jordan Peele’s script for ‘Get Out’ is one that makes social commentary on the Western world we are living in today; Chris is a curiosity, a commodity and is considered to be cool because of his racial background, but none of the characters seem to want to get to know him any deeper than the surface. Elsewhere, with the dark twist to the movie, Peele makes a comment on the divide between black and white that still exists, the gap between rich and poor, as well as making a statement on slavery that is subtle yet glaring at the same time. As well as this, the creepy feel to the film is incredibly well realised, as well as the final act that turns from dread to violence.
As director Jordan Peele allows the unsettling feel of the film to build slowly, with the audience in on much more of the terrifying goings-on than Chris. There are deeply unsettling and curious moments throughout the film, before everything comes crashing to explanation and violence in the final act. Get Out is more of a thriller than a horror, but its comments on divides and control in our society are truly horrifying.
In all, ‘Get Out’ is a smart, dread-filled and beautifully shot horror film, whose horror comes from the way people are treated when they are alive, more than the way they may or may not die. The cast are outstanding in the film, and the only complaint, if there were to be one, is that although the opening sequence sets the tone for the film, in hindsight it feels absurdly out of place with the rest of the story.
RATING: 4.5/5
Review by Brogen Hayes