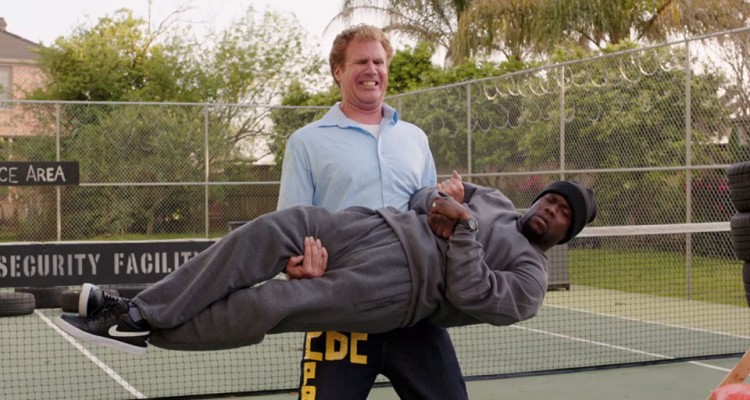 GET HARD (USA/16/100mins)
Directed by Etan Cohen. Starring Will Ferrell, Kevin Hart, Alison Brie, TI, Jon Mayer.
THE PLOT: James King (Will Ferrell) has it all; a beautiful fiancée (Alison Brie), a wonderful home and a job that he is good at. Darnell Lewis (Kevin Hart) runs a car wash and dreams of being able to provide a better life for his wife and young daughter. When King is framed for fraud, however, he turns to Darnell – believing the poorer man spent time in prison – to help him prepare for his stint on the inside. Little does King realise, that while Darnell is turning his home into a makeshift prison, he is winging it, and has never been to prison, or even committed a crime.

THE VERDICT: It seems there have been a slew of mediocre bromantic comedies lately, and although GET HARD seems like it would be just another in this line of disappointments, it is surprisingly funny. The manic tendencies of Kevin Hart have been calmed down slightly, and pairing him with the comedically clever Will Ferrell is a touch of brilliance, as the two actors work well together to elevate the film and set it apart from those that have gone before.

Will Ferrell is as over the top and hilarious as we have come to expect from the actor, but he carefully manages his performance to be low energy, as he is technically playing the straight man to Hart’s manic comedian. There are times at the start of the film where it seems Ferrell is erring a little to much on the side of caution, but he opens up when the film gives him space, and is as madcap and funny as ever. As mentioned, Kevin Hart is not as shouty and obnoxious as he has been in the past, even managing to give Darnell a touch of honest sincerity. Elsewhere, it’s great to see Alison Brie play a selfish, gold digging bitch as it is such a change for the Community actress. Rapper TI turns up as Darnell’s cousin, and Jon Mayer makes a cameo at a party.

Jay Martel, Ian Roberts and Etan Cohen’s screenplay has a basis in reality, but soon swaps this for the ridiculous, and the comedically brilliant. It would be easy for the film to be racist or homophobic, but there is a careful balance created to show Darnell and Ferrell as reasonable men in an extraordinary situation. There are plenty of physical gags, and tons of dick jokes, but in the context of the film, these go from being cheap laughs to being a natural part of the fabric of the film.

First time director Etan Cohen has not only toned Kevin Hart down, but has made a well paced and funny film, that manages not to offend any one group of society, while being offensively funny. Cohen obviously allowed Ferrell and Hart the space to ad-lib, and the chemistry between the two actors is great. There are times when the pacing drops and legal wrangling gets in the way, but the film recovers well, and manages to be amusing right to the end, even if some of the jokes don’t always land.

In all, GET HARD is silly, over the top and fantastically funny. Ferrell and Hart are a strong double act and Cohen’s film is well paced, for the most part. There are some jokes that don’t land, and some dodgy pacing in the middle, but GET HARD is one of the best bromantic comedies we have had the pleasure of seeing on screen in a while.