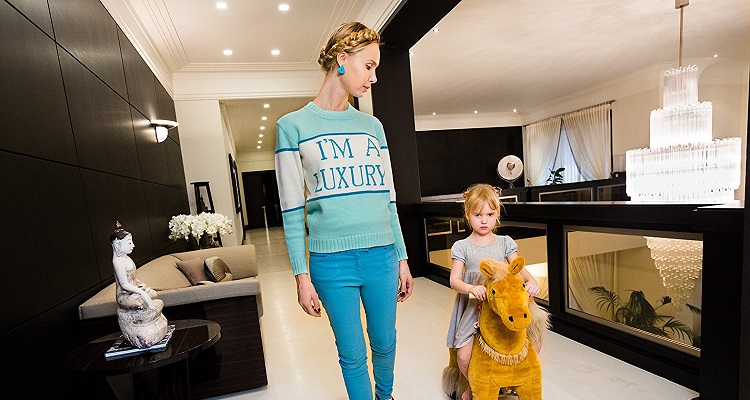 GENERATION WEALTH (USA / 18 / 106 mins)
Directed by Lauren Greenfield. Starring Florian Homm, Tiffany Masters, Jacqueline Siegel, Limo Bob.
THE PLOT: American photo journalist Lauren Greenfield has been fascinated with wealth, fame and how it affects people over the last 25 years. In the 1990s, she started documenting the increasing wealth and seemingly never-ending disposable income of young people in her hometown of Venice, California. She found that the Gordon Gekko principle of ‘greed is good’ had extended to many countries around the world (including Ireland), to create the richest society ever known. Money – there’s never enough of it. Through intimate interviews with subjects she’s documented over the years, from hedge fund managers to rappers to adult film stars and reality TV stars, she finds that the lust for money comes at a high price…
THE VERDICT: The late, great Peter O’Toole once said that money isn’t everything, but a little helps. That’s true to some degree, but one has to wonder if the subjects of Lauren Greenfield’s candid and provocative documentary ‘Generation Wealth’ would agree. They might prefer to say that a lot helps, as soon becomes apparent. Greenfield was a student of anthropology, so she was already interested in how people behave and how they change over time. It’s not just the influence of money, but all that it brings – plastic surgery, huge houses, fame, notoriety and in the case of Florian Homm, criminality (he even made the FBI’s Most Wanted).
Greenfield structures her documentary as a study in addiction. One hedge-fund manager, pushing 40 and having devoted most of her life to work, decides it’s time to finally have a child. The results reveal even more about what she lost while she gained in monetary terms. Another woman goes through life-changing plastic surgery to stay young at a huge cost to her personal life. Greenfield is particularly interested in how money can affect women, who are often placed under societal pressures to be beautiful and appealing to men. Then there’s the questionable mother who subjects her young daughter to bizarre child beauty pageants, as if being beautiful is the only thing that matters. Thankfully, she eventually learned that her daughter needs to enjoy her childhood. Then she admits that she would do it all over again if she could. Hmm…
It’s candid moments like that which really make this a thoroughly engaging documentary. But there’s more… In an unusual twist, Greenfield turns the camera on herself, her children and her parents. Through the prism of these alternative viewpoints, we discover that Greenfield has that same addiction, travelling the world on work assignments and occasionally neglecting her family, in the same way as Florian Homm. Nobody is immune from criticism here. It’s a bold move which adds a further personal angle to the many colourful voices . Despite all the gaudy excesses, shiny bling and hedonism on display, ‘Generation Wealth’ is actually a hopeful documentary as well as a cautionary tale. The real wealth is in people and particularly family. Well-constructed, funny, shocking and thought-provoking by turns, ‘Generation Wealth’ is on the money.
RATING: 4 / 5
Review by Gareth O’Connor

Review by Gareth O'Connor
4
On the money