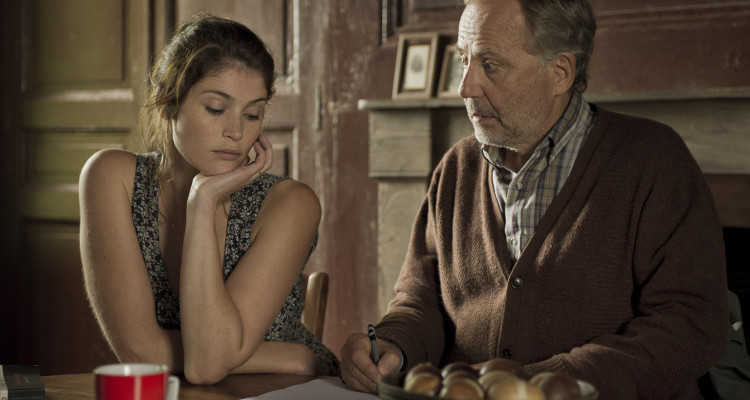 GEMMA BOVERY (France | UK/15A/99mins)
Directed by Anne Fontaine. Starring Gemma Arterton, Fabrice Luchini, Jason Flemyng, Neils Schneider, Mel Raido
THE PLOT: Gemma (Gemma Arterton) and her husband Charlie (Jason Flemyng) move from London to a small French village. There, they catch the attention of Martin (Fabrice Luchini), a baker who moved home from Paris to take over his father’s bakery. Although the couples become friendly, Martin becomes fascinated with Gemma, and the fact that her behaviour seems to so closely resemble that of Gustave Flaubert’s famous character Emma Bovary.
THE VERDICT: Based on a serialised cartoon in The Guardian – which was later published as a book in 1999 – by Posy Simmonds, GEMMA BOVERY is the tale of life imitating art… And nosy neighbours.
Gemma Arterton is lovely in the leading role; she is charming and sweet, but sometimes it feels as though she is the subject of so much attention because she is the youngest person in the town, not the most captivating. Fabrice Luchini has perfected his hangdog expression and his comic timing over his career, so it is no surprise that he is strong here. Jason Flemyng, Niels Schneider and Mel Raido have less to do as Gemma’s various lovers, and Elsa Zylberstein does well enough as Gemma’s neighbour Wizzy, but again, doesn’t have an awful lot to do.
The story, written for the screen by Pascal Bonitzer and Anne Fontaine is mostly told through the eyes of the nosy neighbour Martin, and there are some nice devices used, such as Martin giving exposition by talking to his dog. That said, point of view switches several times throughout the film, so it is often unclear whether events are actually happening, or Martin simply believes that they are. As well as this, although it is often referenced that Gemma is bored by provincial life, there is little evidence of this on screen, so the characters motivations are often muddled.
As director Anne Fontaine starts out strong, but as the film goes on and the affairs begin to materialise, it seems that she loses her grasp on the film, with it almost turning into a farce from time to time. The pacing is also messy, with relationships springing up from nowhere and disappearing just as quickly. The overall effect is a slight and enjoyable but forgettable film, which gently errs on the side of silly.
GEMMA BOVERY is an interesting idea for a film, but it seems that this particular story would have worked better in print, as it is just a little too slight to justify a film. Gemma Arterton is lovely, however, and Fabrice Luchini is well able to carry the film; it’s just a shame that the story, style and conviction of the film are not stronger.
Rating: 2.5/5
Review by Brogen Hayes