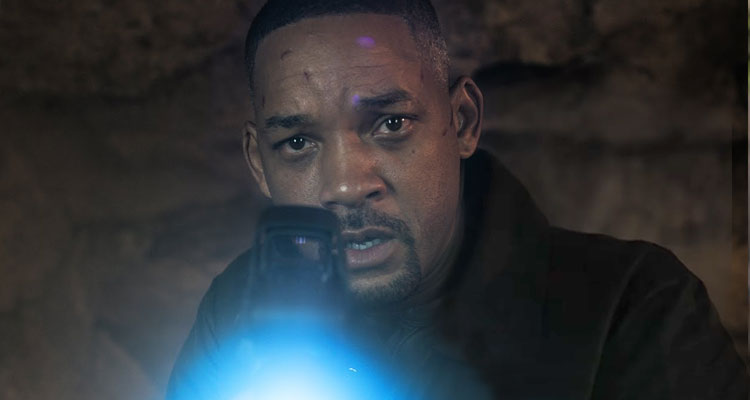 The Plot: Henry (Will Smith) is an aging hitman who has still got it where it counts, eliminating a target on a moving train at a distance. It’s not getting any easier though. This one incident brings a heap of trouble on his head, when his old boss Clay (Clive Owen) wants him dead for his own particular reasons. Teaming up with Government operative Danny (Mary Elizabeth Winstead), who is also targeted for liquidation, Henry comes face-to-face with Clay’s versatile new weapon Junior (also Smith). He looks and sounds just like Henry, only 28 years younger. As Clay and Junior get to grips with their status, they attempt to kill each other – not easy when you’re unable to second guess your opponent…

The Verdict: Taiwan’s most notable director Ang Lee appears to have reached the John Woo stage of his career. An acclaimed Asian director working in Hollywood but making nondescript films that are beneath his considerable talents. While Life Of Pi was memorable, his barely-seen Billy Lynn’s Long Halftime Walk was a confused muddle of American patriotism and anti-war rhetoric. That malaise continues with Gemini Man, a technically ambitious film which is a cinematic experience in itself when viewed in vivid HFR (higher frame rate) 3D. However, that only glosses over the inadequacies of the script, which falls short of anchoring itself to a story that works on its various levels.

The plot doesn’t bear much scrutiny. It’s unnecessarily convoluted and not entirely clear who is trying to outdo the other. Various interested parties come and go in the background, while others are merely hangers-on. Mary Elizabeth Winstead is wasted in a supporting role that is less sidekick and more window dressing to give Henry someone to talk to besides his other self. It hasn’t been a good year for co-writer David Benioff, given the frosty reception to the Game Of Thrones finale. His script with Billy Ray and Darren Lemke has a neat postage stamp concept – hitman faces off against a younger clone of himself. The co-writers are unsure of where to take this high concept, as there’s not enough conflict and self-doubt to make Henry and Junior’s battle more than just a physical one. The script just goes through the motions, from one motorbike chase to another shoot-out, rather than taking it to the next level.

Although the script leaves a lot to be desired, the film is a technical marvel. While Peter Jackson gradually abandoned his HFR 3D experiment with each Hobbit film, Lee has taken up the challenge and then increased it by shooting at 120 fps 3D (similar to Billy Lynn’s Long Halftime Walk, though that version was not screened theatrically in Ireland). The result is some of the best 3D you’ll ever see – so lifelike you can almost reach out and touch it. Shattering glass comes flying at you, gun muzzle flashes have real energy and depth perception is superb. Of course, this comes at a cost. The film loses that film-like sheen, so it resembles something halfway between a film and a TV soap opera. It also highlights some inadequacies (e.g. mouthing dialogue) in the digital de-aging of Will Smith to play his younger self, but is still reasonably convincing.

Like its main character, Gemini Man is a film that is essentially at war with itself. It wants to be a dazzling technical experiment and an exciting, pacy action film with a high concept. It’s more like Hollow Man though, as it’s easy enough to see through its visual style and discover its shortcomings in the script and character development. The two sides struggle with each other for dominance, but the visual style comes out on tops. If only Lee and the writing team had paid a bit more attention to the script, then this could have been something special. Instead, it’s merely an adequate film. Not quite a failure, but not quite a success either. Maybe Lee should go back to making the kind of character-driven films that made his name, rather than expend energy on middling films like this one.