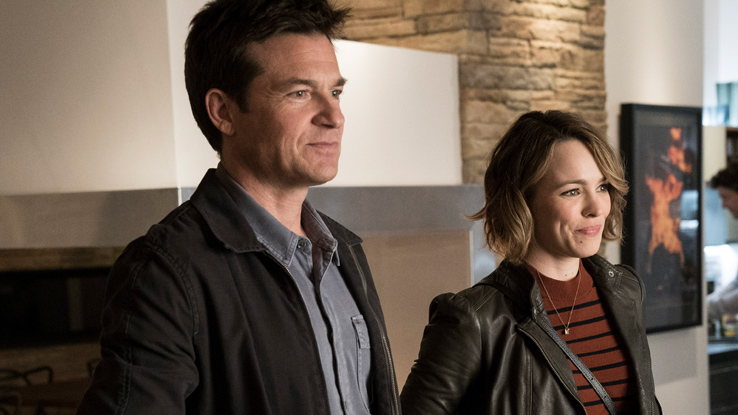 GAME NIGHT (USA / 15A / 100 mins)
Directed by John Francis Daly, Jonathan Goldstein. Starring Jason Bateman, Rachel McAdams, Kyle Chandler, Jesse Plemons.
THE PLOT: When Max (Jason Bateman) and Annie (Rachel McAdams) meet at a pub quiz, it’s love at first correct answer. The game-loving couple regularly host a game night for their friends, challenging them to a variety of board games, charades and other assorted fun. They try to hide this from their oddball neighbour and friendly cop Gary (Jesse Plemons). When Max’s less domesticated brother Brooks (Kyle Chandler) appears, he proposes his own game night. Brooks is taking it up a notch though, hiring a murder mystery company to provide a realistic kidnap experience. Max, Annie and their friends have to follow the clues to solve the crime. Is it all just an elaborate game… or is there something more sinister going on?
THE VERDICT: Trailers can often be misleading, stuffing the meagre best bits of a mediocre film into two minutes to entice an audience to take a chance on it. It’s an old trick which can lead to disappointment. Thankfully, that is not the case for ‘Game Night’. This agreeable, laugh-out-loud comedy thriller lives up to its rib-tickling trailers, delivering more hits than misses over its twisty turny plot.
The plot itself is the stuff of Agatha Christie mixed in with a ‘Galaxy Quest’-style scenario in which the characters take a good while to catch up with the audience. Co-directors John Francis-Daly and Jonathan Goldstein clue the audience in early on that something is amiss in this particular game night… or so it seems. They have plenty of surprises in store, so that the audience has to catch up with the characters at various points too. Mark Perez’s script is careful not to give too much away, keeping a few guest actors in the background until late in the film to spice things up.
If there’s a fault here, it’s that Perez feels the need to overcook things slightly, throwing in some unnecessary twists which just muddy the plot somewhat. Just who is playing who here? It doesn’t need to be that twisty, as the central plot is enough to drive the whole film to the last square on the board. There are some great jokes here which hit the bullseye, even when repeated – look out for the gags involving dollar bills or the coffee tables. That’s comedy gold worthy of repeat value.
The literally game cast nail their characters too, by turns playful, serious and dim-witted. Plemons steals the film with his idiot savant role, hinted at in the worth-staying-for end title sequence. There’s a good balance of thrills, spills and laughs throughout, while keeping the characters, even the smaller supporting roles, in check. ‘Game Night’ does a bit more than what it says on the tin. For once, a comedy thriller that lives up to its trailer. It should certainly pass go and collect lots of dollars at the box office. Rather than being foul, it’s murder most funny here.
RATING: 3.5 / 5
Review by Gareth O’Connor