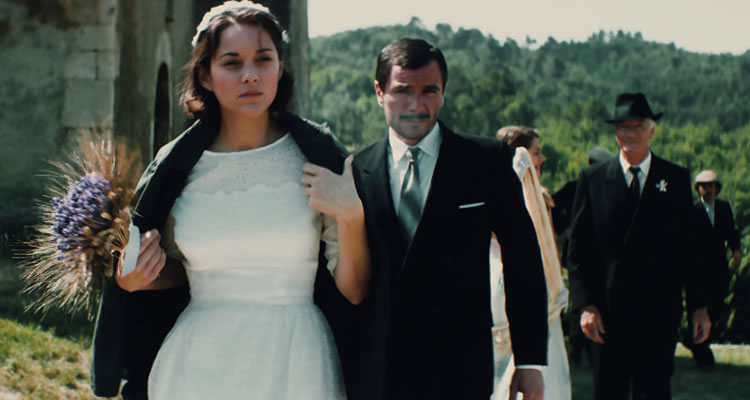 Cannes Review – From the Land of the Moon

FROM THE LAND OF THE MOON (France/TBC/120mins)
Directed by Nicole Garcia. Starring Marion Cotillard, Alex Brendemühl, Louis Garrel.
THE PLOT: In rural France of the 1940s, Gabrielle (Marion Cotillard) falls for the married village schoolteacher and throws herself at him at a public event in front of his pregnant wife and her own mother, who long since seems to have had enough of her daughter’s melodramatic behaviour. Deciding she needs a man, Gabrielle’s mother marries her off to the sweet but unromantic José (Alex Brendemühl), who accepts that his wife will never love him, but the marriage is beneficial to both of them. When Gabrielle is sent to a spa to cure stones’ disease, she meets André (Louis Garrel), an encounter with whom will change her life forever.
THE VERDICT: The first of two films that Marion Cotillard has In Competition at Cannes, ‘From the Land of the Moon’ is based on Milena Agus’ novel of the same name, but although the film is told through flashback, it is not told through Gabrielle’s granddaughter’s eyes, as it is in the book.
Marion Cotillard as luminous in the lead role, and suffers as beautifully on screen as she ever has. It is Cotillard that carries the film through the rather hum-drum romantic melodrama, and as always, makes the character feel real. Alex Brendemühl doesn’t have a lot to do as José, but he is a support to Gabrielle, even as his motivations are not always clear, and Louis Garrel does well with making André a romantic, tortured hero.
The screenplay, written by Jacques Fieschi and director Nicole Garcia, keeps the intrigue of the film going throughout, but does not always make the motivations of the characters clear, as they make decisions that seem to be against their best interest. The film feels sluggish at times, as we start at the end, and work our way forward through flashback, so we know where the film is going to end up; it just takes its time getting there.
As director, Nicole Garcia makes Marion Cotillard the centre of the film, with antagonists and allies on every side, but never truly makes clear whether Gabrielle is deluded, obsessive or simply being dismissed because she is a woman and seems to be hysterical. The pacing of the film is slow, with a clear build to a twist on the horizon, but this borders on the silly, and undermines the rest of the film. There is a rather charming old fashioned feel about the film, but it needed a stronger pace to carry the romantic triangle that springs up at its centre.
In all, ‘From the Land of the Moon’ is a film easily carried by Marion Cotillard who, as always, makes her character luminous and fascinating, but with a rather strange twist, underdeveloped motivations and themes, and pacing that feels rather sluggish, From the Land of the Moon ends with a whimper, and never packs the punch the story truly deserves.
RATING: 3/5
Review by Brogen Hayes