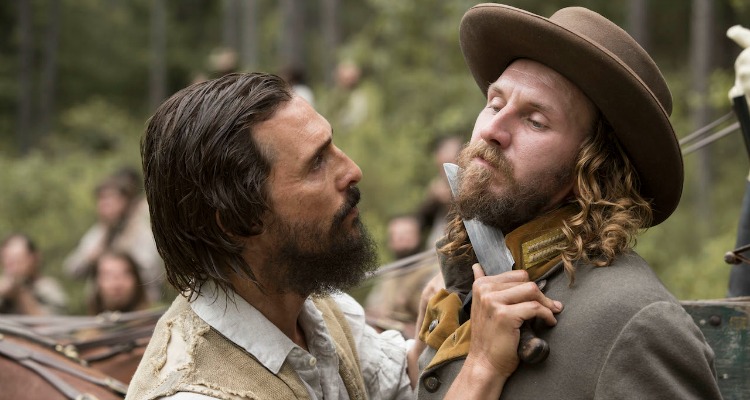 FREE STATE OF JONES (USA/15A/139mins)
Directed by Gary Ross. Starring Matthew McConaughey, Gugu Mbatha-Raw, Mahershala Ali, Keri Russell, Christopher Berry
THE PLOT: During the American Civil War, Newton Knight (Matthew McConaughey) deserts from the Confederate Army and, after initially hiding out in the swamp with runaway slaves, begins to grow his own army, one that is open to all who want to join, and has the aim of taking down the bullies within the southern army.
THE VERDICT: ‘Free State of Jones’, written and directed by Gary Ross, is a tale that is incredibly worthy and has some interesting facets, but in trying to blend together the personal and the political, as well as the past and the future, the film loses a lot of its bite.
Matthew McConaughey stars as Newton Knight, and he is the perfect choice for a charming and charismatic leader. We have seen the actor do roles like this many times on the big screen, so it is no great surprise that this is something that McConaughey excels at. The rest of the cast features Keri Russell, Gugu Mbatha-Raw, Mahershala Ali, Christopher Berry and Sean Bridgers, who all do fine with their roles, even though they do not get a lot to do.
Based on a story by Leonard Hartman, Gary Ross’ screenplay starts well in establishing Newton Knight and his motivations for fighting against the Confederate Army. It is a great shock then, 30 minutes or so in, when the film suddenly jumps to 85 years later, and a courtroom hearing of whether a descendant of Knight is 1/8th African American or not. These interludes come and go throughout the film, and although it becomes clear why this is happening, the strangeness and jumpiness of this choice never sits well with the rest of the film. Elsewhere, the film jumps through time in trying to cover the time during the Civil War and after slavery is abolished, but is never clear what story it is actually focusing on. All of the issues brought up are worthy, but none is given centre stage.
As director, Gary Ross coaxes performances from his actors that stand up under the weight of the oddly jumpy storyline, but other than Newton and his friend Moses, the audience struggles to get to know any of the major players in the film. The pacing of the film often feels torturous as it casts around for a story to cling on to. The cinematography of the film is strong, with the swamps looking as weird and otherworldly as possible, while the violent scenes are never shied away from.
In all, ‘Free State of Jones’ is a bit of a mess; there are plenty of worthy stories in the film, but none has been pulled out and brought to the fore. The performances are fine and the cinematography is strong, but ‘Free State of Jones’ needed a stronger directorial vision to be anything other than muddled.
RATING: 2.5/5
Review by Brogen Hayes