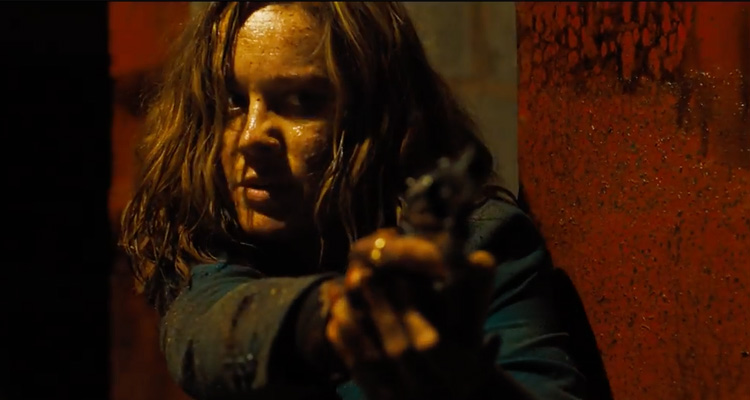 FREE FIRE (France | UK/18/90mins)
Directed by Ben Wheatley. Starring Jack Reynor, Michael Smiley, Cillian Murphy, Brie Larson, Sharlto Copley.
THE PLOT: In 1970s Boston, a group of arms dealers – led by Vernon (Sharlto Copley) – and a group of Irish potential buyers for said arms – led by Frank (Michael Smiley – meet in an abandoned factory to negotiate a deal. This tense powder keg of a meet is set alight when Harry (Jack Reynor) realises that Stevo (Sam Riley), the man he beat up the night before for assaulting his cousin, is working for Frank. The resulting shootout becomes a game of loyalty and survival.
THE VERDICT: Just a year after ‘High-Rise’, Ben Wheatley is back, this time with a crime drama that feels confined as it is messy and drawn out. With Martin Scorsese on as executive producer, it seems that ‘Free Fire’ could easily have been Wheatley’s Reservoir Dogs, but although it is impressive that the director never lets himself be tied into one genre or type of filmmaking, ‘Free Fire’ may be a story of all hell breaking loose, but it lacks the bang that would truly make it work.
The cast of ‘Free Fire’ boasts some impressive names, including Sam Riley, Michael Smiley, Armie Hammer, Sharlto Copley, Cillian Murphy, Noah Taylor and Brie Larson, it is perhaps the exact point of having so many stars that some of them struggle to stand out. Copley obviously has a whale of a time as the prissy, fussing and slightly awkward arms dealer Vernon, and it is from him that much of the comedy in the film arises, the same goes for Michael Smiley whose gruff exterior but gentle soul lead to some hilarious moments and touching scenes. Larson, Murphy and Hammer do fine in their roles, while Sam Riley plays it up as the drug addled Stevo, and Jack Reynor struggles to get past his rather chewy accent.
Amy Jump’s screenplay for ‘Free Fire’ errs on the side of the shootout, meaning that much of the film’s 90 minute running time is taken up with these bad and badder guys shooting at one another as they try to survive. There are some great one-liners – including Michael Smiley advising someone to shut up and “save it for your autobiography” – but the film is thin on story once the shoot out begins. There is a cleverness to the characters switching allegiances, and the hint of a romance between Murphy and Larson threatens to shake things up, but this is a film that bounces from one set piece to another, and while this may be fun to begin with, it soon feels drawn out and overly long.
As director, Ben Wheatley obviously focused on certain characters over others, allowing Sharlto Copley and Michael Smiley to come to the fore in the film. The trouble is, this leaves much of the rest of the cast at a loose end as they try to keep the momentum of this shoot-‘em-up going. The comic timing displayed throughout ‘Free Fire’ is excellent, leading to several laughs throughout the film, but it is hard to shake the feeling that Wheatley was aiming for ‘Reservoir Dogs’ with ‘Free Fire’, and ended up with something closer to ‘The Hateful Eight’ – although, blessedly, nowhere near as long or quite as self indulgent as Tarantino’s last offering. As well as this, the audience never truly gets to know the layout of the room that these characters find themselves fighting in, so while bullets fly, it is hard to know who is shooting at whom, and when.
In all, ‘Free Fire’ has a strong first half hour before all hell breaks loose and the film loses structure and pace. Michael Smiley and Sharlto Copley are on rare form, with Brie Larson, Armie Hammer and Cillian Murphy backing them up admirably. A tighter pace, more of a reason for things to go south and a clearer sense of the room we find ourselves in could have made for a sharper film, whereas as it stands, ‘Free Fire’ has some great moments, some good, and the rest is weak, long and drawn out.
RATING: 2.5/5
Review by Brogen Hayes