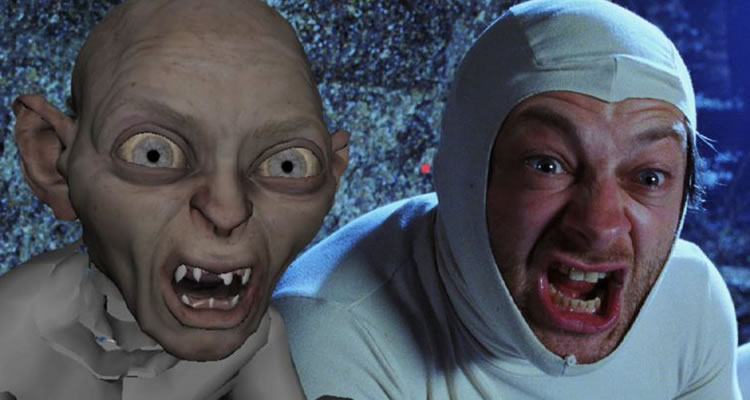 Having made nearly $600 million at the box office and getting nominated for an Academy Award in the process (yup, it was Oscar-nommed!), it comes as no surprise that a sequel to TED was bound to hit your local cinema, with the foul-mouthed teddy-bear due to return this week. What may be a surprise to some is that the title-character was in fact motion-captured by voice-actor, writer and director Seth McFarlane. Every time Mark Wahlberg was singing about his thunder buddy, McFarlane was right there along with him, only to be replaced in post-production by special effects, turning him into that cute little teddy. With that in mind, here’s some of our favorite mo-capped characters!

Appeared in: Avengers Assemble and The Avengers: Age Of Ultron

While the big green mean machine has been played by some heavy-weights in recent times – Eric Bana and Edward Norton both had a go at the role – it was left to Mark Ruffallo to become the first actor to play both Bruce Banner and his pure rage alter ego. Foregoing the usual pure special effects of previous Hulk movies, Ruffallo mo-capped himself as the Hulk, ensuring that even during those huge fight scenes, there was a heart at the centre of the performance.

Living legend Bill Nighy was the voice and performance behind Davy Jones, the captain of the Flying Dutchman, a much feared vessel that searched the seven seas for souls to slave away on his ship. Once he crosses paths with Johnny Depp’s Captain Jack however, the series of films gets more and more fantastical, delving into alternative undersea worlds and giant, ship-swallowing Krakens.

Probably the least seen movie on this list, Beowulf came from director Robert Zemekis in the midst of his mo-cap fever season (after The Polar Express, but before A Christmas Carol), even in a movie featuring a newly buffed Ray Winstone and a barely concealed Angelina Jolie, Grendel was still the most memorable character in store. Featuring a screeching, pained performance from Crispin Glover, we felt sorry for the monster even as we watched it torment a sleepy town.

Always at the forefront of technology, director James Cameron created an entire immersive world of believable aliens known as the Na’Vi on their paradise planet of Pandora. Centred by an incredible performance by Zoe Saldana as warrior princess Neytiri, Cameron had us believe in the world so deeply and so fully that it remains to this day the biggest box office hit of all time. Won’t be long before we finally return to Pandora either, with Avatar 2 due to hit screens in time for Christmas 2017, and two more sequels being released in December 2018 and 2019 respectively.

Appeared in: The Lord Of The Rings Trilogy, King Kong (2005) and Dawn/Rise Of The Planet Of The Apes

We couldn’t go through an article on motion capture without mentioning Andy Serkis. The man behind the tortured precious lover, the hugely emotive huge ape and the hyper-intelligent chimp leader, Serkis is the go-to for mo-cap. His cast-mate Benedict Cumberbatch looked to him for assistance when motion-capturing his performance as that killer dragon in The Hobbit: The Desolation Of Smaug, while Serkis will return to the skin-tight suit for the upcoming sequel to TinTin, as well as playing bear Baloo in his directorial debut Jungle Book: Origins in 2017. Its still unsure if he’ll be mo-capping the big bad villain Supreme Leader Snoke in Star Wars: The Force Awakens this December, so we’ll just have to wait and see!