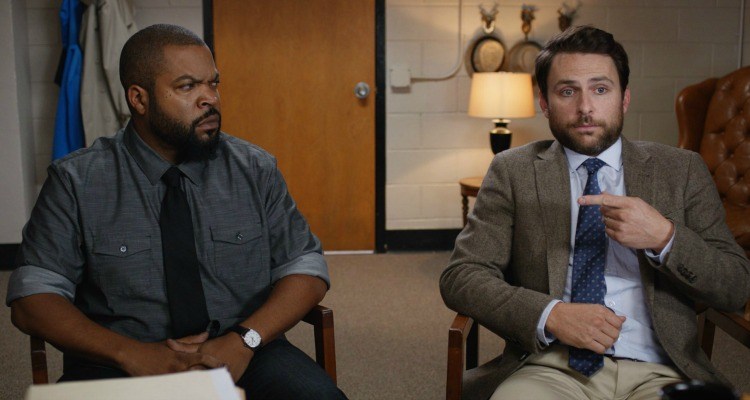 FIST FIGHT (USA/16/91mins)
Directed by Richie keen. Starring Charlie Day, Ice Cube, Christina Hendricks, Jillian Bell, Dean Norris
THE PLOT: The last day of school in Roosevelt High School is senior prank day, but when the pranks get out of hand and English teacher Andy Campbell (Charlie Day) manages to get history teacher Ron Strickland (Ice Cube) fired, Strickland decides the only way to resolve their beef is for he and Campbell to fight each other after school.
THE VERDICT: On paper, the idea of Charlie Day and Ice Cube throwing down after school has tons of potential for comedy, but in reality, ‘Fist Fight’ only has that one joke, and takes its sweet time getting to it.
Charlie Day leads the cast as Andy Campbell, and although fans of ‘It’s Always Sunny in Philadelphia’ will know that Day is a talented and funny actor, virtually none of this is on display in ‘Fist Fight’. The jokes don’t land and simply running away and lying to his wife means that Andy goes from a sympathetic character to an annoying one rather quickly. It is clear that Strickland – played by Ice Cube – was written fairly one dimensionally, and while it is clear that Mr Cube has fun with that, it is when attempts are made to round out the character and make his motivations clear that this falls flat. Christina Hendricks plays a sex pot French teacher, and while she tries – bless her – to make Ms Monet a character that defies her physical looks, and play with the comedy, this is something that Hendricks utterly fails to do. The rest of the cast features Dean Norris, Jillian Bell, Tracy Morgan, Kumail Nanjiani, Denis Haysbert and JoAnna Garcia Swisher.
The screenplay, written by Van Robichaux and Evan Susser hinges on one joke/plot point – Charlie Day and Ice Cube getting into a scrap – and anyone who is expecting anything more than that will be sorely disappointed. There is an attempt to give context with senior prank day being the catalyst and Strickland wanting someone to be held accountable for the shenanigans that go on around the school, but the entire film is spent waiting for Cube and Day to finally let their fists fly, and no amount of oiled hallways, spray painted cars or weird talent shows where little girls sing songs laden with explicit language can make up for the lack of comedy in the film.
As director Richie Keen never managed to keep the energy of the film going long enough for the attempts at comedy to land properly. There is precious little to laugh at here, since the dynamic of small guy vs scary guy with an unspecified past is one that we have seen a million times before, and there is nothing new or exciting created in ‘Fist Fight’. The comic timing of most of the actors is completely off, and there comes a point where the continuous attempts comedy become embarrassing.
In all, ‘Fist Fight’ hinges on the idea that Charlie Day and Ice Cube fighting could be funny, and spends most of its 90 minute running time trying to fill out the rest of the story in order to justify the joke of the title. None of the cast manage to actually be funny, and the comic timing, energy and motivations in the film are non-existent.
RATING: 1/5
Review by Brogen Hayes