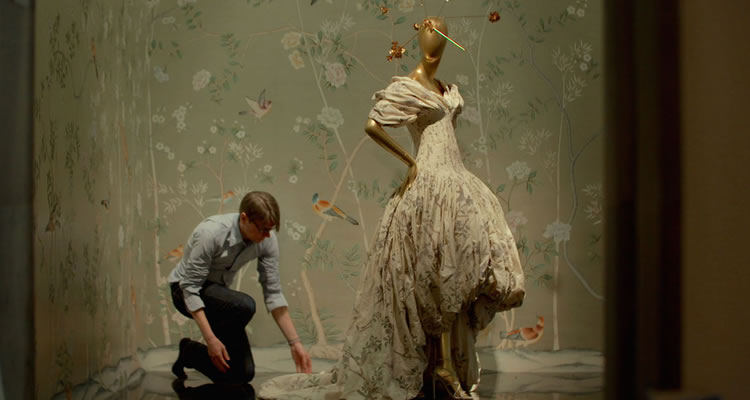 The First Monday in May

THE FIRST MONDAY IN MAY (USA/PG/90mins)
Directed by Andrew Rossi. Starring Andrew Bolton, Anna Wintour, Baz Luhrmann, Jean Paul Gaultier, John Galliano
THE PLOT: Each year on the first Monday in May, the Metropolitan Museum of Art in New York opens their annual exhibition at the Costume Institute with the famous and star-studded Met Gala. In 2015, the exhibition was China: Through The Looking Glass, and filmmaker Andrew Rossi followed curator Andrew Bolton for eight months in the run up to the fashion event of the year.
THE VERDICT: ‘The First Monday in May’ is really a film for fans of fashion, and who are curious as to just how much work goes into an exhibition like China: Through The Looking Glass, which became the fifth most popular exhibition in the Met’s history, and even managed to beat the money raised the phenomenally successful Alexander McQueen: Savage Beauty in 2011.
‘The First Monday in May’ is about the work that goes on behind the scenes of the Met Gala, and is populated with famous faces, as well as Anne Hathaway, Rihanna, Maggie Gyllenhaal, Miley Cyrus and Kate Hudson walking the red carpet at the Gala, the film follows Vogue Editor-in-Chief Anna Wintour – also Trustee of the Met – as she works with curator Andrew Bolton and creative consultant Baz Luhrmann on the prestigious event. As well as this, The First Monday in May addresses the potential religious and political issues with an exhibition focused on China, the issues posed by the space itself at the Met, and discusses the idea of fashion as art with designers and opinion makers like André Leon-Talley, John Galliano and Jean-Paul Gaultier.
Director Andrew Rossi gives audiences an unprecedented look behind the scenes of the Met Gala, and manages to keep the pace of the film moving steadily, but other than the discussion of fashion as an art form, and the fabulous pieces on display, there is very little to keep audiences interested other than the revelation that Anna Wintour is not the dragon we have all been told she is, and things don’t always go according to plan. The final shots of Bolton quietly walking through the work of art he has put together is a lovely moment, but this is not a film for the Blair Waldorfs of the world, and is not going to win over any of us who live in jeans and hoodies.
In all, ‘The First Monday in May’ is an interesting curiosity, and we all love to gawk at a celebrity on the red carpet – and off – but there is little here for the uninitiated. Fans of fashion and costume art, however, are going to be in their element, even though the film feels immediately dated, since the exhibition took place over a year ago.
RATING: 2.5/5
Review by Brogen Hayes