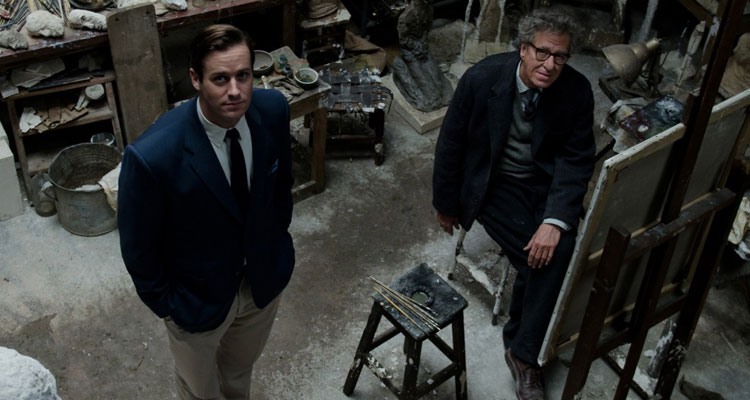 FINAL PORTRAIT (UK/Club/90 mins)
Directed by Stanley Tucci. Starring Geoffrey Rush, Armie Hammer, Clemence Poesy, Tony Shalhoub, Sylvie Testud.
THE PLOT: Paris, 1964. Acclaimed Swiss-Italian painter and sculptor Alberto Giacometti (Geoffrey Rush) is living out his final days with his long-suffering wife Annette (Sylvie Testud) and his understanding brother Diego (Tony Shalhoub). He has a prostitute and muse in the form of the younger Caroline (Clemence Poesy), whom Annette tolerates. His visiting American friend James (Armie Hammer), an author and art critic, agrees to sit for a portrait. Arriving at Alberto’s studio, James expects it to take an afternoon. But the erratic Alberto soon needs longer. Much longer. James tries to re-arrange his flight home, but days soon turn to weeks. Will the portrait be finished… or will Alberto keep dithering?
THE VERDICT: When he’s not doing oddball appearances in ‘The Hunger Games’ or ‘Transformers’ franchises, Stanley Tucci is also an accomplished writer/director. His fifth film since his debut, the delicious ‘Big Night’, is an atypical portrait of artist Alberto Giacometti. Instead of going for a decades-spanning biopic, Tucci has zeroed in on his closing days. In a sense, this liberates the film from the trappings of a conventional biopic. Instead, it becomes its own self-portrait, that of a loyal friendship between two men – the perfectionist Alberto and the patient James.
Tucci draws these characters in broad strokes, but fleshes them out to become more than they seem. Alberto is self-critical, with an early outburst against his own sculpture saying that the stand is perfect, the sculpture not so much. He’s rolling in money, but has little time for it. Instead, he throws it out like confetti to those around him and prefers to hide the rest in pockets of his chaotic artist’s studio. James is a chiselled American, with features that Alberto says make him look like a hooligan. Yet, there’s a friendly understanding between them. As the days pass, they break out of the studio, walk and chat over wine and several cups of coffee. This makes the film feel less stagey, so it becomes a more accessible character piece.
He may have been slumming it of late in the likes of notorious bomb ‘Gods Of Egypt’, but Rush gets a juicy role to sink his teeth into here. Tucci coaxes an eccentric but loveable rogue out of Rush. It’s a wonderful, unfussy performance which is complimented nicely by Hammer’s low-key delivery. For all the good acting, the film still feels quite slight, with a running time that matches it. Tucci doesn’t really let the audience in on what makes Alberto tick, preferring to let audiences get a feel for him and nothing more. The film becomes a painting, open to its own interpretation. That’s a sly directorial touch on Tucci’s part. However, the performances are enough to drive the film and make it more engaging than it initially seems.
RATING: 3 / 5
Review by Gareth O’Connor