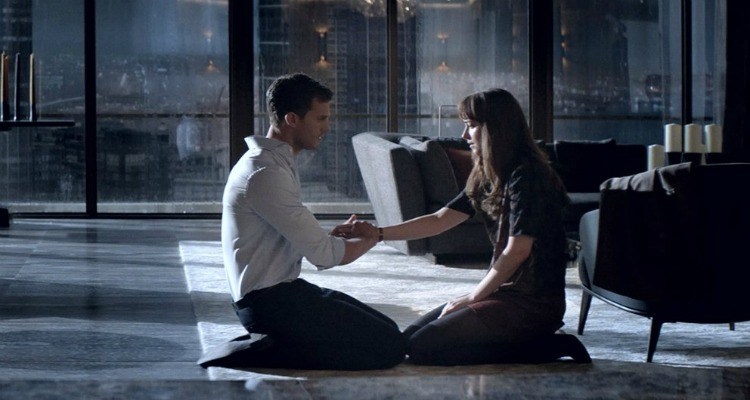 FIFTY SHADES DARKER (USA/18/118mins)
Directed by James Foley. Starring Jamie Dornan, Dakota Johnson, Eric Johnson, Eloise Mumford, Bella Heathcote.
THE PLOT: Picking up where the first film left off, Ana (Dakota Johnson) finds herself unable to resist when Christian (Jamie Dornan) tells her he wants her back. Demanding “No rules, no punishments and no more secrets”, Ana quickly falls back into bed with her paramour, but soon finds that all is not as rosy as it seems.
THE VERDICT: Here we go again folks, another ‘Fifty Shades’ movie, and another burst of discussions about “Mommy porn” and sexual freedom. The trouble with this story, however, is that there really isn’t much of one, and anyone going in for an ogle at the sex scenes will be sorely disappointed.
After much speculation that Dornan and Johnson were not returning to their leading roles in the ‘Fifty Shades’ franchise, they are back, but director Sam Taylor-Johnson and cinematographer Seamus McGarvey are out. Do not despair, ‘Fifty Shades’ fans, their absence is not holding back this cinematic freight train. Dornan and Johnson reprise their roles, and other than Ana being a little less tolerant of Christian’s controlling ways, all is as it was the first time around. The performances are wooden and there is no tangible chemistry between these two leads playing characters who seemingly cannot resist one another. The rest of the cast features Marcia Gay Harden, Eric Johnson, Eloise Mumford, Rita Ora and Bella Heathcote.
The story, adapted from EL James’ book by her husband Niall Leonard, is full of plotholes and inconsistencies – as we have come to expect from the first film – and although the main issue with the first film was Christan Grey’s stalker-ish and controlling ways, there has been little effort made to make him any less obsessive and possessive, although attempts are made to humanise him, that really don’t work. As for the dialogue, well it is just as painful as that of the first film, and contains gems such as “I don’t like strangers gawking at you” and “He wants what’s mine”, which elicited some uncomfortable laughter from the audience.
As director James Foley seems unconcerned with creating a dramatic arc, or ebb and flow throughout the film, so that when obstacles are thrown up in the young lovers’ way, they seem forced, for the sake of creating tension, and do not work. The sex scenes are as dull and vanilla as Ana herself hopes for, even as she begs to be taken back to the Red Room, and the entire film is unsatisfying, and feels rather pointless.
In all, ‘Fifty Shades Darker’ is Fifty Shades Duller than the first film, with unimaginative and clunky storytelling, boring – and surely painful – sex scenes, and beige characters that do little to set the screen alight.
RATING: 1/5
Review by Brogen Hayes