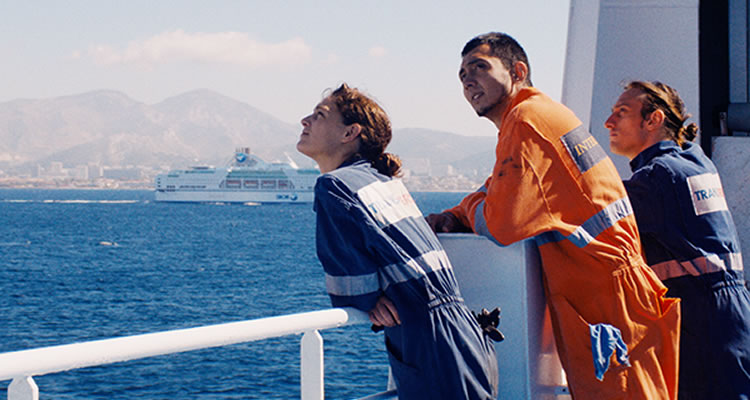 FIDELIO – ALICE’S JOURNEY (France/TBC/97mins)
Directed by Lucie Borleteau. Ariane Labed, Melvil Poupaud, Anders Danielsen Lie, Pascal Tagnati, Jean-Louis Coulloc’h.
THE PLOT: Alice (Ariane Labed) works as an engineer on a freighter, and is used to leaving home and her boyfriend Felix (Anders Danielsen Lie) behind for months at a time. When she is called to work on the Fidelio after an engineer dies, she is not only occupying a dead man’s bed, she is back on the first ship she ever worked on, with a former lover on board.
THE VERDICT: FIDELIO – ALICE’S JOURNEY is not only a film about reconnecting with a lost love, but a film that throws a spotlight on gender roles, and the contrasts between Alice’s life at sea and on land.
Ariane Labed does well in the leading role as Alice; she creates a gentle balance in the character, making her both gentle and stern, dismissive and caring. Labed also conveys a lot of emotion through her expression, telling a lot of Alice’s story through her eyes alone. The rest of the cast is made up of Melvil Poupard as Gael, Pascal Tagnati, Jean-Louis Coulloc’h, Nathanaël Maïni, Bogdan Zamfir, Manuel Ramirez, Ireneo San Andres, Marc-Antoine Vaugeois, Corneliu Dragomirescu and Thomas Scimeca.
Mathilde Boisseleau, Lucie Borleteau and Clara Bourreau’s screenplay examines Alice’s life and the choices and sacrifices she must make in order to the job that she is good at, and she is passionate about. Most of this is conveyed through single lines of dialogue, but is carried by Alice throughout the film. As well as this, the screenplay examines what happens when two people who have history, are thrown together in a confined space. Of course temptation arises, and it is how Alice deals with this that makes the story interesting. There is a subplot where Alice discovers the diary of the dead man she replaced, and the influence this potentially has on her. There is a lot of opportunity wasted here, as this dominates the film for a time, but is left to drift away.
As director, Lucie Borleteau makes the film a quiet examination of a woman in a male dominated environment, how she deals with the expectations of her and the choices she makes. The film is rarely flashy or overly dramatic, but conveys emotion carefully. There are times when focus is given to perhaps the wrong end of the tale – and too much focus given to the vulgar actions of Alice’s colleagues – and this drags the pacing, and the impact of the film down.
In all, FIDELIO – ALICE’S JOURNEY is an interesting examination of how a woman adapts to her male-dominated surroundings, and how she makes peace between her two different lives. There is a strong story here, but it gets lost through some odd pacing, and focus on irrelevant details.
RATING: 3/5
Review by Brogen Hayes