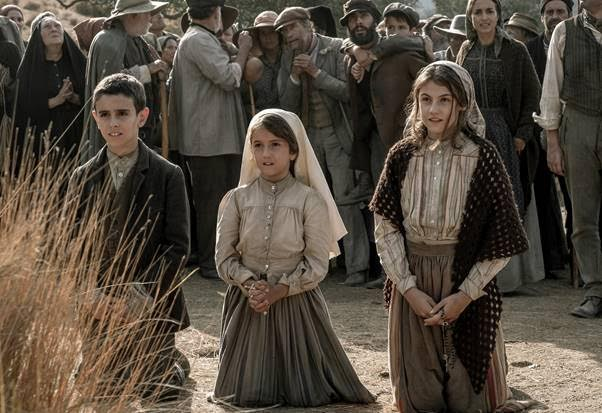 The Plot: Portugal, 1989. Professor Nichols (Harvey Keitel) sits down to interview Sister Lucia (Sonia Braga) for his forthcoming book. She had a unique religious experience as a child in Fatima, which gained worldwide attention. The story then flashes back to WWI, with Portugal plunged into a destructive war that takes its sons day-by-day and anti-clerical sentiment is on the rise. 10-year-old Lucia (Stephanie Gil) first encounters the Angel of Peace in a cave. Then, along with two other young children, she witnesses the apparition of the Virgin Mary. Thousands of people start gathering in the town to bear witness to this miracle, much to the concern of mayor Arturo (Goran Visnjic)…

The Verdict: Mass spiritual experiences are not uncommon and we in Ireland have had our own apparent visitations. New Portuguese film Fatima, presumably filmed in English to appeal to a wider audience, is inspired by historical events involving the (in)famous visitation of the Virgin Mary to three shepherd children in Fatima in 1917. This prompted an unusual occurrence with the sun and much consternation among the clergy and the disbelieving authorities as to how to respond to it. In re-telling the story for a modern audience, director and co-writer Marco Pontecorvo has fashioned an old-school Sunday matinee involving a number of different perspectives on this religious event but with the primary focus being on the children involved. That is part of its strength and also part of its weakness.

The Virgin Mary appears to the three children on a daily basis, one of whom can’t hear her. She talks about preaching peace and ending the conflict that has ravaged Portugal and Europe. The children, who are the only ones who can see the apparition, become messengers for peace. Keen to avoid a scene, Mayor Arturo attempts to debunk the apparent visitation and keep the political heat from Lisbon at bay. Even Lucia’s own mother doesn’t believe her, so the film mostly becomes a think piece about what faith means and how it can be interpreted by people with different agendas. The young actors playing the children are earnest enough and get across the difficulty of convincing adults that their experiences are far from child’s play – or is it? Pontecorvo leans too heavily on the children’s perspective to sell the story to a potential doubting Thomas in the audience. A child’s imagination needs more validation.

More interesting is the interplay between the adult Lucia and Professor Nichols, as she attempts to convince his non-believer about what she experienced decades before. As she says, she doesn’t have answers for everything. Well played by screen veterans Keitel and the glorious Braga, it becomes a respectful battle of wills as they humour each other’s beliefs or lack thereof. If only Pontecorvo had brought this framing narrative to the fore and spent more time with it a la Amadeus, then the film’s leap of faith requirement might be more digestible. Their scenes together are sprinkled occasionally throughout the film, but not long enough for the overall film to have a lasting impact. Despite a clumsy and unnecessary vision of hell inserted at an awkward moment, Fatima is a competently-made film that is moderately engaging. One can’t help but sense that a better and more provocative film is in there somewhere though. Perhaps the last word should go to Thomas Aquinas – ‘To one who has faith, no explanation is necessary. To one without faith, no explanation is possible’.