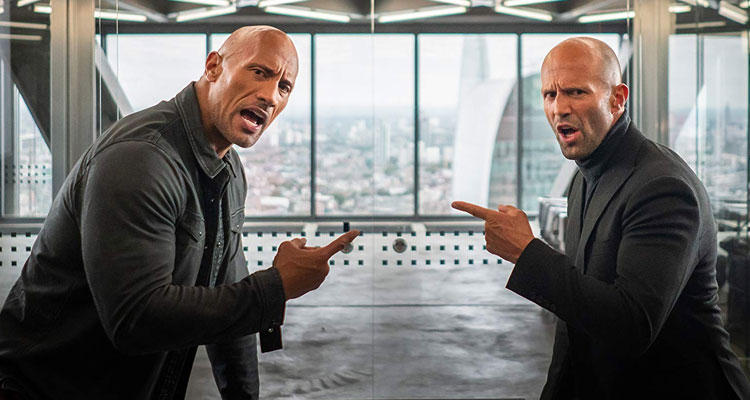 The Plot: MI6 agent Hattie Shaw (Vanessa Kirby) is framed for the theft of a deadly virus by super-soldier Brixton (Idris Elba). She now has the virus in her system – but under control for a crucial period of time. Assigned to track her down is CIA agent Luke Hobbs (Dwayne Johnson). He’s assigned a partner – Deckard Shaw (Jason Statham), the one man he really doesn’t want to work with. But with Shaw’s sister involved, they’ll have to set aside their many differences and varying approaches to fisticuffs to work together – and save the world in the process…

The Verdict: If the introduction of CIA Agent Hobbs in Fast & Furious 5 was the booster shot of adrenaline that the franchise needed at that time, then the brief introduction of Deckard Shaw in the subsequent film was the wild card that nobody saw coming. Things got really interesting in Fast & Furious 8 when the crackling onscreen chemistry between The Rock and The Stath overtook that film and became the best thing about it (sorry Vin Diesel). So now we have a spin-off film, Fast & Furious: Hobbs & Shaw. It’s very much in keeping with the themes of the franchise – globe-hopping antics, serious car-nage, over-the-top stunts, big personalities and clashing egos. Most importantly though, it reinforces the most important theme of the franchise – it’s all about family in the end.

Universal may not have any superheroes flying around the screen at the moment but with their current acquisition of the next James Bond film, you can sense that they’re mainlining the world’s longest-running film franchise into Hobbs & Shaw. These two alpha males may not have capes and superpowers, but they’re certainly distinctive enough characters who have set up their Bond-like franchise. Apart from the glamourous women and globe-hopping locations (London, Mosco, the Ukraine, Samoa), this film even has a Bond-worthy villain in the daftly-named Brixton. Dubbing himself ‘the black Superman’, he’s a genetically-modified super-soldier who can stop bullets with his gloved hand and likes to quote Nietzsche (!). He wants to save the world by killing it first. Karl Stromberg and Hugo Drax had similar delusions of grandeur, so Brixton is clearly carrying the torch for them.

A film like this is pretty much critic-proof, given that this franchise has gone from strength-to-strength, beefing up its cast to the point that it becomes even more popular with each outlandish entry. Suspend your disbelief as Hobbs plummets down a skyscraper on a rope and comes out without a scratch… or attempts to keep a helicopter from flying away by using several cars, a chain and his own meaty bare hands. The man responsible for this supreme slice of silliness is director David Leitch, the maniac who gave us a punishingly brutal stairway fight in Atomic Blonde – one of the best fight sequences in recent years. This franchise has operated on gravity-defying actions sequences, so each film has to one-up the other. There are plenty of bruising fight sequences here, but it’s all done with a knowing sense of humour about its characters. This is what makes the film work, raising it above a generic action film into something hugely enjoyable.

A brief shot references a poster for 48 Hrs, which was no doubt an influence on this take on the time-honoured buddy movie. Johnson and Statham make for a great sparring and bickering odd couple, as they trade barbed insults and endlessly size up their characters’ egos – and other body parts. There is mileage in these characters and they are given decent backstories this time, which round out the idea that family is what matters – not bullets, muscles or fast cars. Fast & Furious: Hobbs & Shaw is pure summer popcorn fun with no pretensions about what it is. Yes, it’s silly and probably doesn’t make much sense. Two celebrity cameos are shoehorned in for extra laughs, but don’t add much to the story. But… it works and doesn’t drop the ball for the Fast & Furious franchise. If anything, this film kicks the ball out of the field altogether. Switch off your brain, grab a Rock-sized bag of popcorn and drink… and enjoy. This is what Hollywood summer blockbusters are all about.