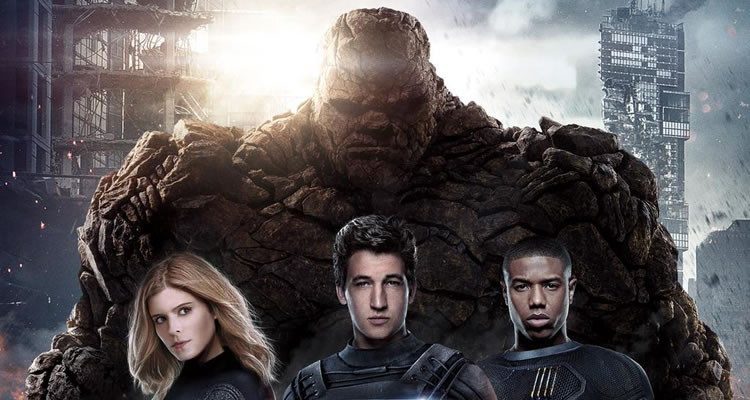 FANTASTIC FOUR (USA/12A/100mins)
Directed by Josh Trank. Starring Kate Mara, Miles Teller, Michael B. Jordan, Jamie Bell, Tim Blake Nelson.
THE PLOT: Four young scientists find a way to teleport to another dimension, and find themselves altered in shocking and new ways when they return. The four must come to terms with their new powers and band together as friends to stop a former friend from destroying the Earth.
THE VERDICT: The central four are made up of Miles Teller as Reed Richards, Kate Mara as Sue Storm, Michael B. Jordan as Johnny Storm and Jamie Bell as Ben Grimm. Added to these four – who never really have a chance to show off their collective acting chops – is Toby Kebbel as Victor Von Doom, Reg E. Cathey, Tim Blake Nelson and Dan Castellaneta. Truthfully, it is hard to say whether any of the cast are good or bad at their roles as they are completely vanilla and, although time is given to develop them into real people, this never seems to quite happen.
The story, written for the screen by Simon Kinberg, Jeremy Slater and Josh Trank focuses on the origins of this merry band of superheroes, through their scientific experiments. The scenes with the characters as children are oddly anachronistic, with 2007 feeling like 1987 on screen. That said, the first half of the film is actually watchable, with the characters bonding and getting to know one another, but this is soon lost as soon as the action – such as it is – kicks in. Much of the development of the teleporting device is shown through montage, which doesn’t give the characters a chance to grow and develop. Add to this the fact that the most interesting year of the characters’ lives is cut out of the film, and some huge potholes and the film goes from gritty sciencey superhero movie to a fantastic mess.
As director, Josh Trank gives loving focus to the start of FANTASTIC FOUR, but as the film progresses, it seems that he lost interest. Plot holes abound and some of the dramatic choices made seem unfathomable. Add to this some messy pacing, actors who are never given a chance to truly act, and a final act that takes place in another dimension – meaning there is never a true sense of danger – and FANTASTIC FOUR loses its shine.
In all, FANTASTIC FOUR is a fantastic mess. The first half of the film does its job, and there are some nice touches throughout, but the pacing, vanilla characters and lack of true danger let the film down badly. Marvel fatigue may be setting in, but this film could have benefitted from some of the formula used over at Marvel Studios – fight, fight, quip – as FANTASTIC FOUR tries to be something new and exciting, but ends up being nothing much at all.
RATING: 2/5
Review by Brogen Hayes