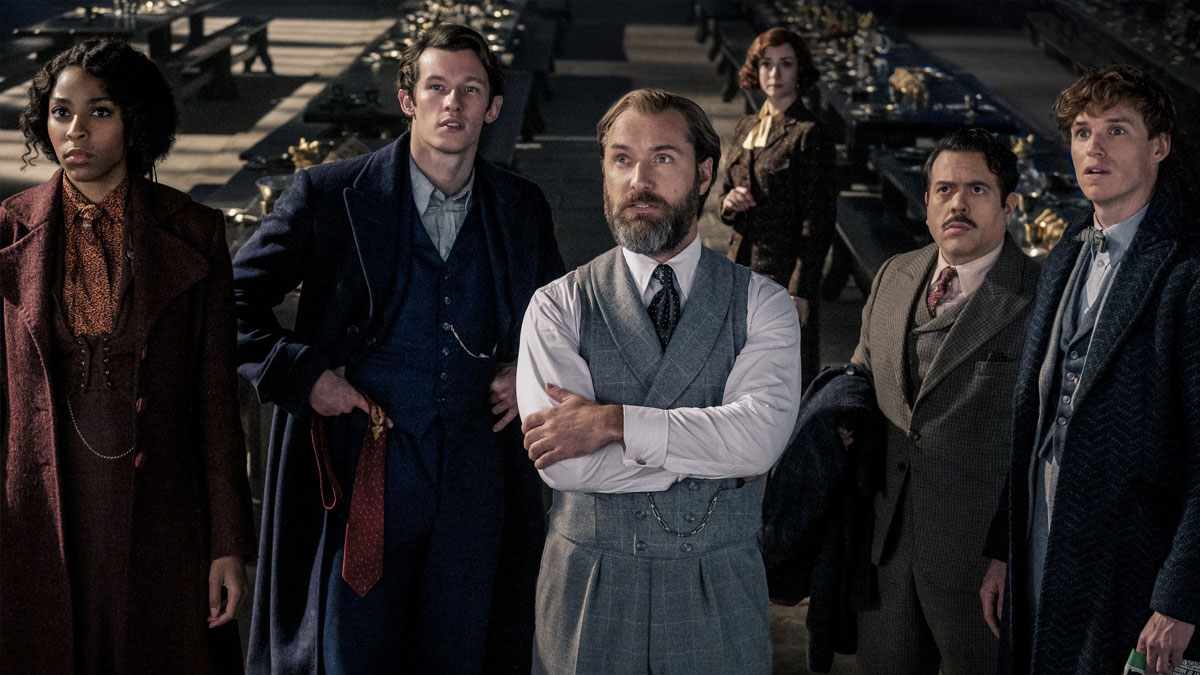 FANTASTIC BEASTS: THE SECRETS OF DUMBLEDORE – Behind The Scenes Interview

Fantastic Beasts: The Secrets of Dumbledore is the final chapter in the Wizarding World saga which began over twenty years when young Harry Potter emerged from under the stairs in Harry Potter and the Philosopher’s Stone. The Potter series has spawned theatre shows, a three-hour immersive studio tour, and The Fantastic Beasts trilogy, set fifty years before Potter was born. We joined the global press conference where stars including Jude Law, Eddie Redmayne, Mads Mikkelson and director David Yates gave an insight into this final, Fantastic adventure.

Jude Law plays the infamous Professor Dumbledore and says that in this outing, we see more of the qualities we associate with him in the later Harry Potter films. “He’s not the fully formed Dumbledore of the Harry Potter books and films; he is a man still finding his way, still confronting and resolving his demons. In this film, he’s facing the past, he’s facing himself and his guilt, but if there is a quality that links him to his older self, I would say it’s his mischievousness and humour.” He says that one aspect that stays the same throughout all the films is the character’s belief in people. “Dumbledore believed in Draco; he even believed in Tom Riddle. He sees the good, or the potential good, and I think that’s something he’s always had.”

Law says that Eddie Redmayne, who plays the magizoologist Newt Scamander, gave him invaluable advice when he joined the franchise in the Crimes of Grindelwald. “On the second Fantastic Beasts film, my first film, I remember Eddie telling me that if there’s a situation or a problem with a scene, remember, you’ve got magic at your disposal. In this film, we go to Berlin, and we have a scene with a magic hat and all sorts of things flying this way and that, and I remember Eddie’s words: it’s magic. So, I can do that. I didn’t need to see things flying for real.”

This latest finds Dumbledore and Newt on a more even footing, something which Redmayne says he enjoyed. “I love the new Dumbledore relationship. What I love is that it’s got that complexity of master and apprentice, but it’s evolved to being something almost fraternal. There’s a moment in this film where Newt sees vulnerability in Dumbledore and tries to pass on a moment of wisdom to him. That is a big progression, but what I love about Newt is he’s an introverted guy and is most comfortable with his creatures and in his own world, but Dumbledore has seen a quality in him that he has the potential for leadership, albeit in an unconventional way.”

Mads Mikkelson steps into the film as Gellert Grindelwald, a character previously played by Johnny Depp, and says that he felt like he was joining a family from day one. “It was like a family visit, and you can only hope that they will adopt you. And they did. The whole gang is fantastic. The crew is fantastic, and David Yates, our director, is fantastic. If the cast is the family, then David is the godfather. He has directed [this series] so many times; he makes everybody feel at home right. My journey was fast, but I felt at home right away.”

The film delves further into Dumbledore and Grindelwald’s previous romantic relationship. Although they parted ways decades ago, there is still a connection with significant consequences. Mikkelson says that although Fantastic Beasts is about magic, it was vital for them to find the reality in their relationship. “If you add the magic, then a lot of things happen to us as characters, but it also goes the other way. We wanted this to be real. We wanted that relationship to be real, real people, real situation, real disappointment with each other. And then we’re wearing a hat that is magical, but we need to forget it in some of these scenes, to make it real.”

Law says that the two actors spoke many times about what life was like for young Dumbledore and Grindelwald and imagined how their relationship would have developed. “I’ve always imagined that Dumbledore was in quite a lonely place. He was brilliant and outstanding at a very young age, to the point where he probably felt slightly isolated and then suddenly, he met someone who is as brilliant and matches him and inspires him. That kind of connection is very powerful. I think it’s important to remember what their time together would have been: incredibly dynamic, incredibly cherished, and special. Then they have this awful moment where they realise they’re on a different path, you’re moving away from each other, but that doesn’t necessarily take away from the explosive kernel, the firework that went off initially.”

Jacob is the one muggle, or non-magical being, who is allowed to join the witches and wizards on their adventures. Dan Fogler, who plays the muggle, says that when we first encounter Jacob he is suffering from the loss of his great love Queenie (Alison Sudol), who has joined a darker path. “Jacob’s extremely down on his luck, and it seems like he’s just in this constant state of loss. He’s lost his love. He’s lost his appetite. He’s losing his bakery. He is very sad when you first see him, but he still holds that glimmer of hope. When he is offered a chance to come back and join the adventure again, he takes it, and he does it for his love. [Queenie] is his whole motivation.”

Jacob is not the only one to feel pain; Queenie’s new path takes her further away from her love and into dangerous territory. Alison Sudol said it is hard to talk about Queenie’s new journey without spoiling her arc, but she did give some insight. “At the end of the second film, we see Queenie make a shocking decision, something that no one expected. When you think about it, she was in one unfortunate circumstance after another because of how the wizarding world operates, and the prejudice. All she wants to do is be with the person she loves, and the narrow mindedness of the world she lives in puts her into a vulnerable position where somebody that’s manipulative can tell her what she wants to hear. That’s going to have an impact. So, at the start of this film, we find her in a world that is very different from any world she’s ever been in before.”

Sudol also says that this is the first time Queenie is allowed to embrace her powers fully, but it presents her with problems. “She’s being utilised for this tremendous power that she’s either had to hide in the past, or she’s been made to feel guilty about, and something is interesting about a person who hasn’t been able to live fully as who they are. I think a lot of young women can relate to that as well of what happens when somebody sees that burning part of you that nobody else sees, but she is in a tricky position because of it.”

Newcomer Jessica Williams plays Professor Hicks, a charms professor at Ilvermorny, the North American wizarding school. As a fan of the books since childhood, she says it was overwhelming and thrilling to tread the hallowed halls of Hogwarts. “I got chills. I started reading those books in the third grade and to be in the Great Hall and see the kids in their robes was amazing. There were a lot of times where I had to go back and forth in this movie between just totally nerding out and just being like, I cannot believe I’m here. It was totally a pinch-me moment.”

David Yates has directed seven films in the franchise and says that his enduring memory will be the friendships that he made. “These stories bring such a collective together, and there’s something beautiful and enjoyable about working with the people around me. When you make a movie, it’s a huge logistical enterprise; it’s tough creatively, logistically, and technically. Going into that experience with people you respect and admire, who can take the strain of it with real dignity and some real humour, is essential. That’s the qualities I found in many of the people I work with in front of and behind the camera. If I look back over those seven films, it is a fond memory and that sense of family. We use that word quite a bit, but it’s important because that doesn’t always happen in our industry because it’s a tough business.”

Yates also says that the enduring legacy of the films will be their celebration of values, love, loyalty, and friendship and, most importantly, its celebration of outsiders.

“These films empower the person you always underestimate, and they do it in this magical space. That resonates with a lot of people out in the real world. It’s a beautiful thing to be part of stories that create a safe space for people when they go into the movie theatre to watch them.”

FANTASTIC BEASTS: THE SECRETS OF DUMBLEDORE – Is now showing in Irish cinemas