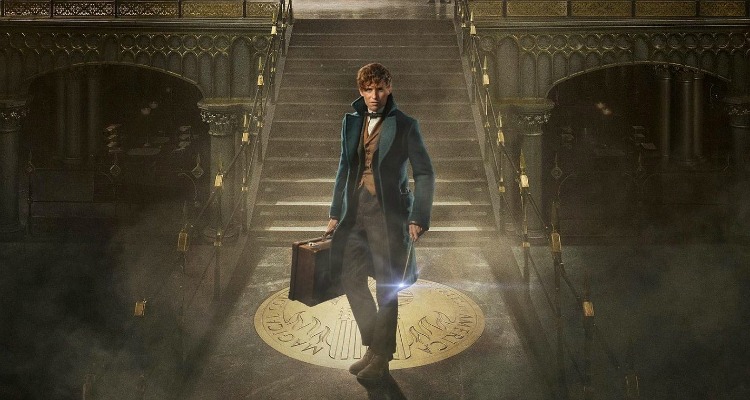 Fantastic Beasts and Where to Find Them

FANTASTIC BEASTS AND WHERE TO FIND THEM (UK/USA/12A/132mins)
Directed by David Yates. Starring Eddie Redmayne, Katherine Waterston, Dan Fogler, Alison Sudol, Ezra Miller, Samantha Morton, Jon Voight, Carmen Ejogo, Colin Farrell
THE PLOT: Seventy years before Harry Potter picks up Newt Scamander’s (Eddie Redmayne) textbook on magical creatures at school, Fantastic Beasts and Where to Find Them follows Scamander as he journeys to New York in the 1920s. The divide between the wizarding community and No-Majs – American wizard slang for Muggles – is strong and with the combined threat of evil wizard Grindelwald on the run, and a magical creature stalking New York City, Scamander probably could not have picked a worse time to visit the city.
THE VERDICT: ‘Fantastic Beats and Where to Find Them’ is set within J.K. Rowling’s wizarding world, but those hoping for a Potter cameo or two will be disappointed; this film is not only set a long time before Harry’s adventures, but it is an entirely new story from Rowling; the first of her wizarding stories for the screen not to be based on a book, but written with cinema in mind.
Eddie Redmayne leads the cast as Newt Scamander, and makes the character gentle and kind, with an affable air and a bumbling English charm. Redmayne, unsurprisingly, carries the film ably, and easily introduces audiences to this new and unfamiliar magical world. Katherine Waterston plays Porpentina Goldstein, a disgraced Auror who knows that Scamander is up to something, even if no-one believes her, and Colin Farrell plays the menacing and mysterious Percival Graves in a beautifully understated and light performance. Elsewhere, Dan Fogler plays Jacob Kowlaski, a No-Maj who finds himself drawn into the magical world, Alison Sudol plays Porpentina’s sister Queenie, Samantha Morton plays a No-Maj named Mary Lou, Ezra Miller brings the creepy as Creedence and Carmen Ejogo plays Seraphina Picquery.
J.K. Rowling’s screenplay feels as though it is a fully realised world and, since most of the characters in the film are adults, the restrictions put upon Harry and his friends in the previous films do not apply, meaning magic abounds and to wonderful effect both for the look and the feel of the film. Since ‘Fantastic Beasts and Where to Find Them’ is not based on a novel – although it is inspired by a novella of the same name, which Rowling wrote for charity – the slavish attention to the source material that the Harry Potter films were often bogged down by is absent, meaning this film feels self-contained and fully realised, and can follow the rules of story-telling for cinema without having one eye on a novel. The dialogue in the film is lovely and only as expository as it needs to be, and the characters are well rounded and realised on screen. As well as this, this new world that J.K. Rowling has created feels fully realised and the film is well balanced between being a light hearted caper, and the more traditional world threatening tale that we would expect from Rowling.
As director, David Yates obviously has fun with the new characters, coaxing strong performances from his cast, and this new world, where the rules of the Harry Potter franchise do not always apply. There are times where the film feels slow and ponderous, but although the story may not really move for the first hour, it is still a pleasure to spend time in Rowling’s all new wizarding world.
In all, ‘Fantastic Beasts’ and Where to Find Them is an all-new magical delight. The cast are all on great form, breathing life into this magical caper with a dark ending. The addition of magical creatures brings comedy and light, with the darker elements of the story creeping through the entire film until they reach boiling point. This is the start of a whole new franchise for Rowling, and with ‘Fantastic Beasts and Where to Find Them’, it is off to a flying start.
RATING: 5/5
Review by Brogen Hayes