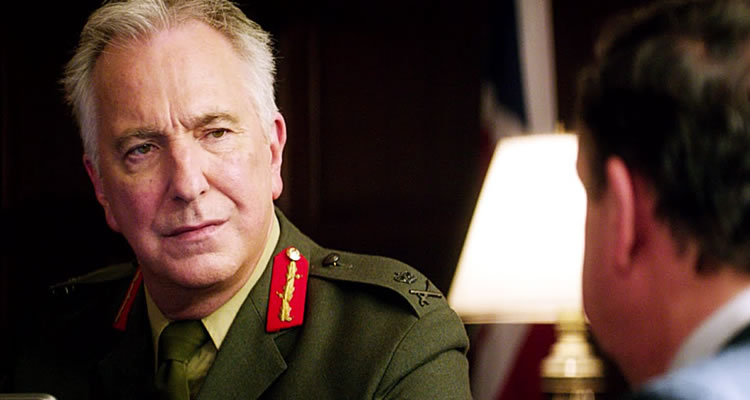 Eye in the Sky

EYE IN THE SKY (UK/12A/102mins)
Directed by Gavin Hood. Starring Alan Rickman, Helen Mirren, Aaron Paul, Phoebe Fox, Barkhad Abdi.
THE PLOT: Col. Katherine Powell (Helen Mirren) is in charge of a routine surveillance operation in the UK, with the drone pilots based in the US as part of a joint operation. With government Minsters watching the operation’s every move, events become complicated when a bomb plot is discovered and a young girl enters the kill zone.
THE VERDICT: Alan Rickman’s final live action role could not be less different than the ones we came to know and love him for. Far from a villain, Rickman’s performance of Lt. General Frank Benson shows that the true villain in ‘Eye in the Sky’ is fear, and those who perpetrate it.
Helen Mirren also takes on an unusual role, as the Colonel in charge of making tough decisions. Mirren makes Powell a pragmatic woman, with more consideration for the lives of the many than those of the few. Rickman is on splendid form as a no-nonsense army officer, and the two are joined on screen by Aaron Paul as a drone pilot, Phoebe Fox, Jeremy Northam, Barkhad Abdi, Richard McCabe and Kim Engelbrecht.
Guy Hibbert’s screenplay ties together the many elements of this operation, that takes an unexpected turn. The choices made in the UK, the US, China and Kenya affect the lives of potentially dozens of people, but Hibbert makes sure that the drone’s physical removal from the space does not mean that these soldiers and ministers are not emotionally engaged with what is happening on the ground. Unlike Ethan Hawke’s drone thriller from last year – ‘Good Kill’ – the events of the film focus on one potential drone strike, and the consequences of that action. The people on the ground have no idea that across the world, politicians and solders are deciding their fates, and it is this that makes the film so engaging, as well as the underlying question of whether the needs of the many outweigh the needs of the few. As well as this, there are some lovely and subtle symmetries drawn, such as Rickman’s character buying a doll for a young girl about the same age as the one he finds himself deciding the fate of.
Director Gavin Hood ramps up the tension throughout the film, with characters drifting in and out of the danger zone, without ever realising the danger they are in. The audience mostly watch from afar, as those in charge of the big decisions do, but unlike the ones making the choices, we are emotionally invested in the fates of those on the ground, and find ourselves rooting for fate to intervene. In fact, making fate the biggest villain of the piece is the way in which the film succeeds in being so gripping; control is taken from the people making the tough choices over and over again, with no simple answers being provided.
In all, ‘Eye in the Sky’ is a gripping thriller that puts the audience in the room with those making the difficult decisions, and on the ground with those likely to be affected. Mirren, Rickman and Paul shine through in a strong cast and although there are no simple answers here, ‘Eye in the Sky’ does its best in showing every angle to be considered. Also, Rickman’s final scathing line is a delight.
RATING: 4/5
Review by Brogen Hayes