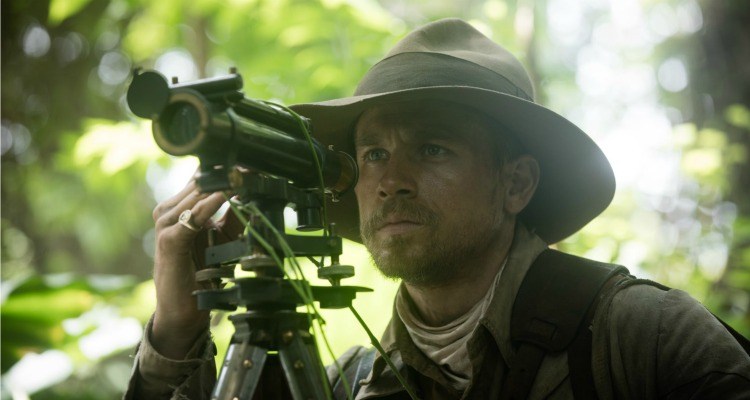 Explorers in the movies… From Indiana Jones to The Goonies

This week, ‘The Lost City of Z’ is released in Irish cinemas. Based on the novel by David Grann, the film follows British Army Officer Percival Fawcett (Charlie Hunnam), who has never progressed as far has he would like within the army When he is assigned to an exploration mission with the Royal Geographical Society to map the uncharted jungles of Bolivia, Fawcett finds a passion for the uncharted lands and the mysteries they hold, that he never expected. Fawcett believes there is an ancient lost city waiting to be discovered in the jungle, but when he sets out on his third voyage into Bolivia with his son Jack (Tom Holland), the mystery deepens even further.

To celebrate the release of ‘The Lost City of Z’ in Irish cinemas, Movies.ie has taken a look back at other explorers in the movies…

‘Indiana Jones and the Raiders of the Lost Ark’
Indiana Jones’ (Harrison Ford) first outing as archaeologist adventurer saw Jones pitted against the Nazis, who are searching for the Ark of the Covenant. Jones is authorised to search out the Ark before the Nazis can get their hands on it, sending him on a race against time, and evil.
‘Indiana Jones and the Raiders of the Lost Ark’ not only made a star of the titular adventuring archaeologist, but had a great sense of humour, droll characters and a great sense of adventure, while being heightened and over the top. 80s kids were certainly inspired by Indiana, with many of us seeking out a career in adventure before the economy tanked!

‘Aguirre: The Wrath of God’
Written and directed by Werner Herzog, ‘Aguirre: The Wrath of God’ tells the story of Spanish soldier Lope de Aguirre (Klaus Kinski), who leads a group of conquistadores down the Orinoco and Amazon Rivers in South America in search of the legendary city of gold, El Dorado.
‘Aguirre: The Wrath of God”, being a film by Bavarian auteur Werner Herzog, is a film about madness, obsession and folly, and was a huge influence on Francis Ford Coppola’s ‘Apocalypse Now’. The madness and folly of the story spilled over into real life, with Herzog and Kinski – who, interestingly, was offered the role of Indiana Jones and turned it down – clashing constantly throughout filming. On one occasion Kinski fired three gunshots a hut where extras were playing cards, blowing the tip off one extra’s finger. ‘Aguirre: The Wrath of God’ fantastically captures the obsession that explorers deal with, when trying to track down legendary locations that may or may not exist.

‘Explorers’
Ben (Ethan Hawke) is obsessed with sci-fi movies, and often dreams of a circuit board, drawing it upon waking each morning. Eventually, Ben turns to his inventor friend Wolfgang (River Phoenix) to help make his dream a reality. When the two, and their friend Darren (Jason Presson) manage to make a spaceship, they find that they have bitten off rather more than they can chew.
‘Explorers’, directed by Joe Dante, was a flop when it was released in 1985, partly because it was overshadowed by the Live Aid concert, and partly because the film was rushed into production and never properly finished. That said, ‘Explorers’ became a cult classic when it was released on VHS, even having cut scenes reinstated when it was released on Netflix.

‘The Goonies’
Young friends Mikey Walsh (Sean Astin), Data (Jonathan Ke Quan), Mouth (Corey Feldman) and Chunk (Jeff Cohen) call themselves The Goonies, and when they find a gold doubloon and a treasure map, they set out to find the pirate One Eyed Willy’s booty to save their homes from foreclosure.
“HEY YOU GUUUUUYS!!!” ‘The Goonies’ is based on a story by Steven Spielberg and written for the screen by Chris Columbus. The film is a good old fashioned adventure movie that appealed to the exploring spirit of kids and nostalgic adults alike, as the exploration was done in search of treasure but an attempt to save the most important place in the world; home.

‘Atlantis: The Lost Empire’
This Disney animated movie follows Milo Thatch (Michael J Fox), a cartographer and linguist at the Smithsonian, believes that he has found an ancient manuscript that contains directions to the lost island of Atlantis. Thatch teams up with a group of intrepid explorers to journey under the waves to find the mysterious and mythical lost city.
Inspired by the works of Jules Verne, and the legend of the lost city of Atlantis, ‘Atlantis: The Lost Empire’ was the first of Disney’s films to rely heavily on CG animation, rather than hand drawn animation. Fans were not impressed at the time of the film’s release, that Disney were not releasing another fairy tale along their usual lines, but the film has consistently been praised (as well as criticised) for being adventure heavy and geared toward older audiences.

‘The Lost City of Z’ is released in Irish cinemas on March 24th 2017. Watch the trailer below…