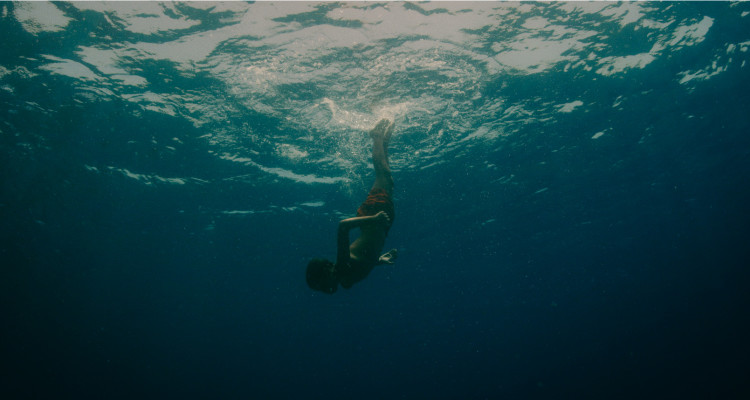 ÉVOLUTION (France | Belgium | Spain/TBC/81mins)
Directed by Lucile Hadzihalilovic. Starring Max Brebant, Roxanne Duran, Julie-Marie Parmentier, Mathieu Goldfeld, Nissim Renard.
THE PLOT: The only residents in the town where young Nicolas (Max Brebant) lives are women and young boys. After he sees a dead body in the ocean while swimming, Nicolas begins to question things he always took for granted; why must he take medicine when he doesn’t feel unwell, why are all the boys hospitalised and where does his mother go every night.
THE VERDICT: Lucile Hadzihalilovic’s 2004 film ‘Innocence’ focused on female sexuality, and so ‘Évolution’ feels like a companion piece of sorts, since it focuses on the reproduction of this mysterious species through the male. The film is beautifully and bleakly shot, with the ocean playing a huge part in the lives of the inhabitants as well as the way the species reproduces. Sumptuous close up often strips back to bleak wide shot, giving the film a disconcerting feel.
The cast of the film is made up of Max Brebant as Nicolas, Roxane Duran as Stella; the nurse who takes pity on the young confused boy in her care, Julie-Marie Parmentier, Mathieu Goldfeld and Nissim Renard. Each performance is strong and layered, and each do well with underlining the strange and other worldly feel of the film without trying to give the audience answers.
Lucile Hadzihalilovic and Alanté Kavaïté’s film sets out to be strange and to set the audience on edge as we survey the strange world of the film, but although it obviously sets out to ask more questions than it answers, there is enough information given for the film to be satisfying, although perhaps not 100% understood; this is a story for the audience to engage with, rather than have everything explained to them.
In all, ‘Évolution’ is mesmerising and engaging, although sometimes slow to get to where it is going. This is a tale of another world that we don’t understand; yet we don’t have to be given all the facts to understand that all is not well here. The film is beautiful, bleak and challenging but doesn’t patronise the audience with simple or quick answers.
RATING: 4.5/5
Review by Brogen Hayes