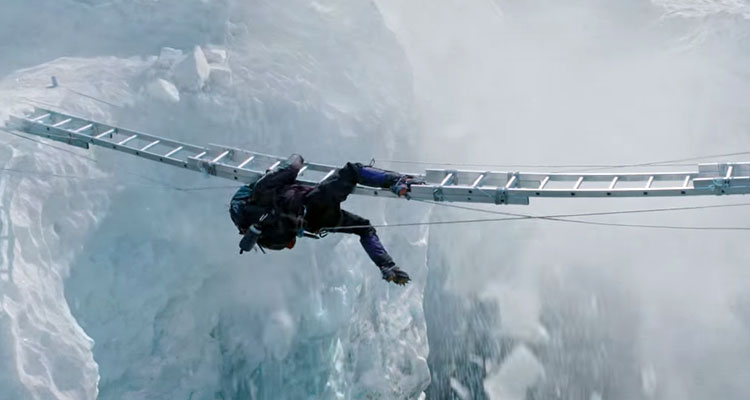 EVEREST (USA | UK | Iceland/12A/121mins)
Directed by Baltasar Kormákur. Starring Jason Clarke, John Hawkes, Jake Gyllenhaal, Kiera Knightley, Emily Watson, Josh Brolin
THE PLOT: With its peak standing 29,029 feet above sea level, Mount Everest in the Himalayas is the ultimate adventure. Many brave souls have climbed its peak and conquered it. But the deadly mountain has also claimed the lives of over 250 people who have now become part of the fabric of mountaineering history. New film Everest charts the 1996 expedition led by two international teams.
Rob Hall (Jason Clarke) is an Australian who climbed the mountain some five times. He sets up a company called Adventure Consultants, to guide amateur mountaineers to the peak and bring them safely down. His devoted wife Jan (Keira Knightley) is about to give birth back home, but is aware of the dangers involved. Joining the international group are Beck (Josh Brolin), Doug (John Hawkes) and Jon (Michael Kelly). Rival mountaineer Scott (Jake Gyllenhaal) begins his own ascent with his team, Mountain Madness. As Hall tells his team early on, the peak is at the cruising altitude of a 747, so their bodies will be quite literally dying. They will have to acclimatise to the thin air and extreme cold temperatures. As they arrive at each base camp, they edge nearer to the peak. Getting to the top is one thing, but getting back down to civilisation and safety is a whole different ballgame. Particularly with a vicious snowstorm on the way…
THE VERDICT: ‘Everest’ is quite an achievement. Filmed as much as possible on actual locations on Everest and other mountains, this is a film that literally puts you right there, on the mountain. Hold onto your seat. Particularly if you opt for IMAX 3D, where all that’s missing is a chilly breeze to complete the cinematic experience. The attention to detail and level of commitment from the cast is superb, really selling their characters and their motivations. These people are not foolhardy souls going on an ego trip on the most dangerous place on Earth. This is what makes us human – the will to achieve seemingly impossible things and push ourselves further no matter what the environment.
Nobody in the excellent ensemble cast drops the ball. Even Knightley, sporting an Aussie accent, manages to wring some proper emotion out of her satellite phone calls to Clarke. Icelandic Director Baltasar Kormakur made a film in 2012 called ‘The Deep’. It was a remarkable true story about a man surviving in freezing cold waters after his fishing boat capsizes. He brings that same gut-level of realism to ‘Everest’, making it a very moving, human story. It’s beautifully shot by Salvatore Totino and powerfully scored by Dario Marinelli. But none of that would matter if you didn’t care about the characters. Kormakur celebrates the sheer spectacle of Mount Everest, but also wisely pays tribute to the brave men and women who risked their lives to find themselves at the very top of the world. There’s no other way to put it – ‘Everest’ is simply a must-see film.
RATING: 4/5
Review by Gareth O’Connor