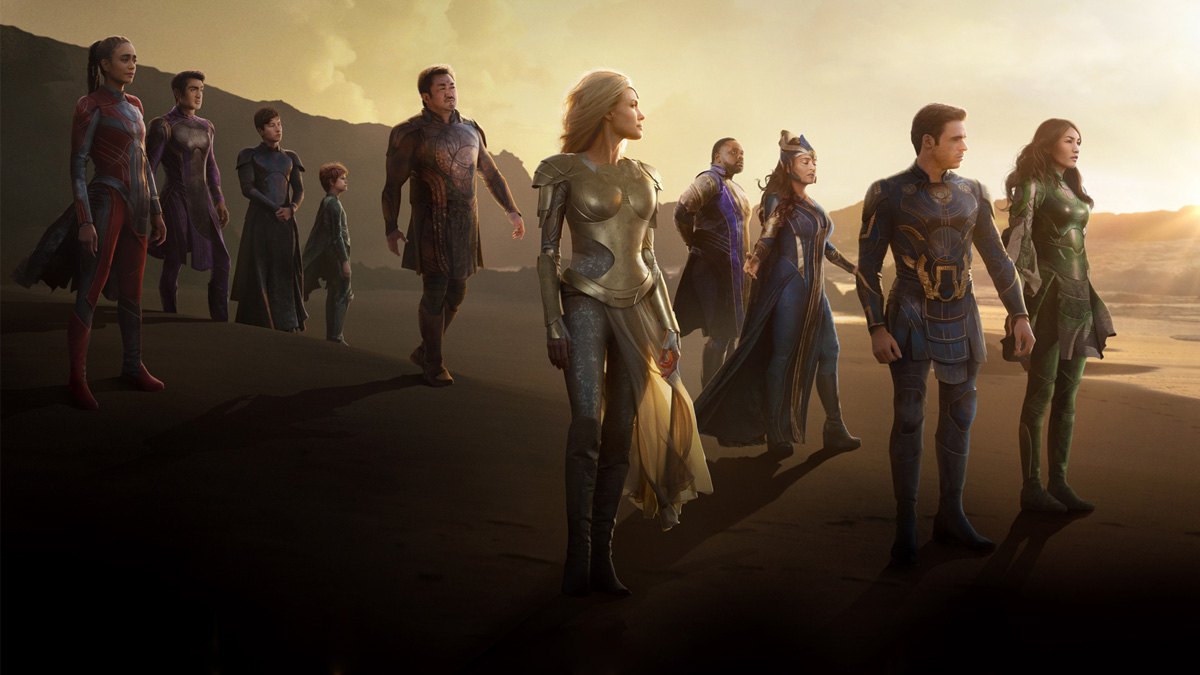 The Plot: Super beings known as Eternals arrived on Earth thousands of years ago, sent by higher power the Celestials to shape its development. However, they are not to interfere with internal human conflict or its future. Sersi (Gemma Chan) reconnects with old flame Ikaris (Richard Madden) when their sworn enemies, alien creatures known as the Deviants, resurface and cause chaos. A cosmic plan is emerging, with the future of Earth at stake. Sersi seeks out their leader Ajak (Salma Hayek) and gets the Eternals back together again to face something they had not anticipated…

The Verdict: Moving from small, intimate arthouse dramas set against the mythical backdrop of the American West to IMAX-sized Marvel superheroes clashing against the unknown is likely to have mixed results. And so it is with Eternals, Chloe Zhao’s huge step up onto the shiny Marvel plinth from her three previous films including recent Oscar winner Nomadland. It’s possible that she needed a lift from Thor on the way up just to smooth out the lines in the transition, though on the evidence of Eternals it would appear that some traces of the journey remain. That’s not to say that Eternals is a major disappointment or a misfire from Marvel. It’s enjoyable popcorn escapism and does its job to entertain, but in a more functional way that we’d normally be accustomed to from Marvel. They’re taking risks again, but with some caveats as if they’ve held back from what they really want to say with this film.

The ancient prologue starts in Kubrickian fashion, as the Eternals arrive on Earth and further the development of the human race by teaching it how to use weapons. It’s that cycle of violence that comes into play in the film’s grander themes. Thousands of years later, humankind has adjusted to the post-Blip world. The Eternals decided not to interfere with Thanos’ snap of his chunky fingers, their own Prime Directive coming from their superbeing boss – a red, floaty Iron Giant in space. The Eternals are called back together when the grand plan of their presence on Earth is revealed to all of them. They have critical decisions to make. With four credited screenwriters, including Zhao herself, the script is ambitious and epic enough in its scope. As a character references them at one stage, the Eternals are the original superheroes and are refreshingly diverse in every respect – the most yet for any superhero film. Zhao isn’t just world-building here. She’s time-building too showing the evolution of Earth through contact with the Eternals. Chariots Of The Gods indeed.

That ambition is certainly admirable, as Zhao flits between time periods for specific character development moments before returning to the main action. She succeeds in building a group dynamic and unity of purpose for the Eternals, backed up by a strong cast who have to somehow convey weighty themes of fate in a blockbuster format. The Eternals are not unlike Zhao’s previous nomadic characters looking for meaning in an indifferent universe and scenes set on a South Dakota farm reinforce that directorial stamp. It’s a Zhao film, but not as you might expect it. The mythology of the Eternals is compelling enough, tying into a theory espoused by one Lieutenant Spock – history has shown that it is easier to destroy than to create. This comes at a narrative cost though. For all the doomsday scenarios and sweeping action sequences built around them, the human side is a letdown here. As a viewer, it’s difficult to care about the fate of the Earth when native humans are little more than background extras (apart from Brian Tyree Henry’s Phastos, who has a touchingly developed family). This can be a problem in modern superhero films (e.g. Avengers: Age Of Ultron), but it’s more pronounced here.

For a humanist director like Zhao who has built a career on characters with character to slip on that particular banana peel is strange and inexplicable. It’s not that she’s the wrong fit for the material or can’t direct action. Marvel have already had faith in female directors coming from arthouse backgrounds – Cate Shortland’s successful take on Black Widow earlier this year. It’s more that Zhao’s ambition is wider than her leap into the Hollywood ranks, so there’s a somewhat uneasy alliance between her scope and the end result within an expected Marvel format. There’s risk-taking on display, but somewhat muted. Was there interference from the higher-ups perhaps? The cinematic ground upon which Eternals is built is therefore uneven, which also extends to two end credits scenes which are arguably in the wrong order. That uneven ground doesn’t imbalance the whole film though, as Zhao pulls through in the end and delivers a rousing finale worthy of any superhero film. Eternals works within its cosmic and earthbound limits and that’s fine for what it is. It’s just a bit less super than we’ve come to expect from Marvel. 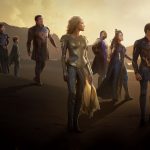 In short: A bit less super