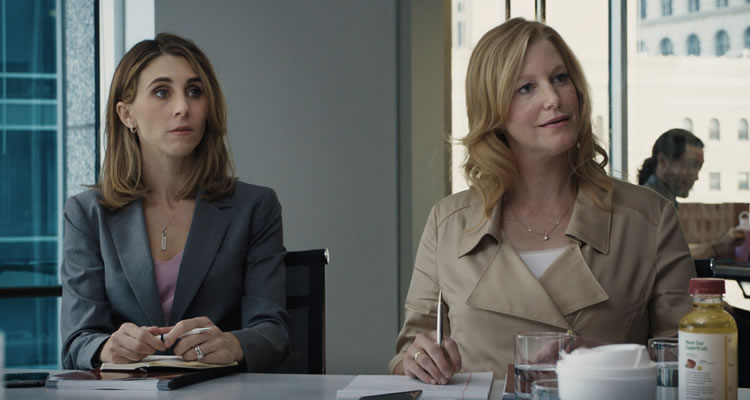 EQUITY (USA/15A/100mins)
Directed by Meera Menon. Starring Anna Gunn, James Purefoy, Sarah Megan Thomas, Alysia Reiner, Craig Bierko
THE PLOT: Investment banker Naomi (Anna Gunn) is tenacious, smart and incredibly good at her job. When scandal threatens her newest investment however, Naomi must get to the bottom of the rumours, and uncovers a web of corruption that begins right at her own front door.
THE VERDICT: ‘Equity’ is the first female driven film about Wall Street, but although it has some smart commentary about women struggling in a world dominated by men, it does feel startlingly regressive at times.
Anna Gunn leads the cast here, and she is no stranger to playing powerful women, who refuse to be shut out because of their gender, and this is just who Naomi is. Although she operates fully legally, she has made some wrong choices in her life; choices that would be completely different if they were made by a man, Gunn makes Naomi strong and wilful, and someone who does not suffer fools gladly. Alysia Reiner plays Samantha, a prosecutor with something to prove, and as much as her character Figueroa was a force to be reckoned with on Orange is the New Black, the same is true here, as Samantha is tenacious and as strong willed as the people she is investigating. Sarah Megan Thomas rounds out the central trio as Erin, a young woman desperate to get ahead, no matter the cost. The rest of the cast features Craig Bierko, Nate Corddry, Carrie Preston and Lee Tergesen.
Amy Fox’s screenplay, based on a story by herself, Sarah Megan Thomas, Alysia Reiner attempts to show up the differing ways that women and men are treated in the world of high finance, and to an extent succeeds, but there are times when this entire message is undermined by the behaviour of the characters. Women try to break out of their traditional roles while slipping deeper into them, and this is the first hurdle that the film encounters.
The second hurdle comes at the hands of director Meera Menon, who gives the audience all the information we need to root for the characters, but gives us very little emotional reason to support these women, other than the fact that they are women, and they are the centre of the story. Although the performances are good, the action does not kick in until late in the film, and even though the reveal of corruption and the desire that people have to get ahead is interesting, it comes too late in the film to truly be effective.
In all, there is a great concept behind ‘Equity’, but for all that the film tries to be progressive, there are times when it is distinctly backward looking. The performances are great though, and although the message gets somewhat lost through some winding story and on the nose metaphor, ‘Equity’ is definitely watchable, if not particularly exciting.
RATING: 3/5
Review by Brogen Hayes