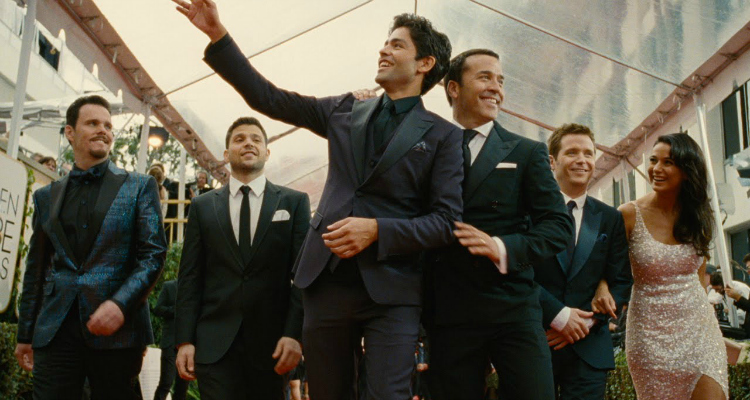 ENTOURAGE (USA/15A/104mins)
Directed by Doug Ellin. Starring Adrien Grenier, Kevin Connolly, Jerry Ferrara, Jeremy Piven, Kevin Dillon, Billy Bob Thornton, Haley Joel Osment, Emmanuelle Chriqi, Perrey Reeves, Debi Mazar.
THE PLOT: Picking up right from where the TV series left off, with movie star Vince (Grenier) insisting that the first movie under his agent-turned-studio-boss Ari Gold (Piven) be one that he not only stars in but directs too. Big movie stars insisting that they finally direct themselse, as anyone will tell you, always works out just great. Chief financier is Texas oil billionaire Larsen McCredle (Thornton), who, along with his idiot son (Osment), so, when this sci-fi superhero movie goes over-budget, hey, drama unfolds. Texan billionaire style.
THE VERDICT: It’s been four years since HBO called time on the behind-the-Hollywood-scenes series that ran for eight years and, well, nothing has changed. Which is possibly a good thing. Or a bad thing.
Hard to tell with this pretty-good-episode outing, ENTOURAGE never having quite managed the male bonding on Diner nor the biting backstage satire of The Larry Sanders Show, having settled instead for SEX & THE CITY for boys.
The gang’s all here, including Gernier’s movie star Vince, Matt Dillon’s B-list-actor brother as Vince’s B-list-actor half brother, the slippery Jeremy Piven as slippery superagent Ari Gold.
The presence of the adult, oddly-shaped Haley Joel Osment as the numbskull son can only make you think of Will Ferrell’s soap opera mini-series spoof THE SPOILS OF BABYLON, and the producers here really should have chased the neanderthal-featured comic genius for Thornton’s role here. Mainly because Thornton is a dick, and extremely hard to watch without being reminded of the fact that he is a dick.
So, not dreadful, but nothing to write a Hollywood script about either.
RATING: 2/5
Review by Paul Byrne

Review by Paul Byrne
2
Nothing has changed