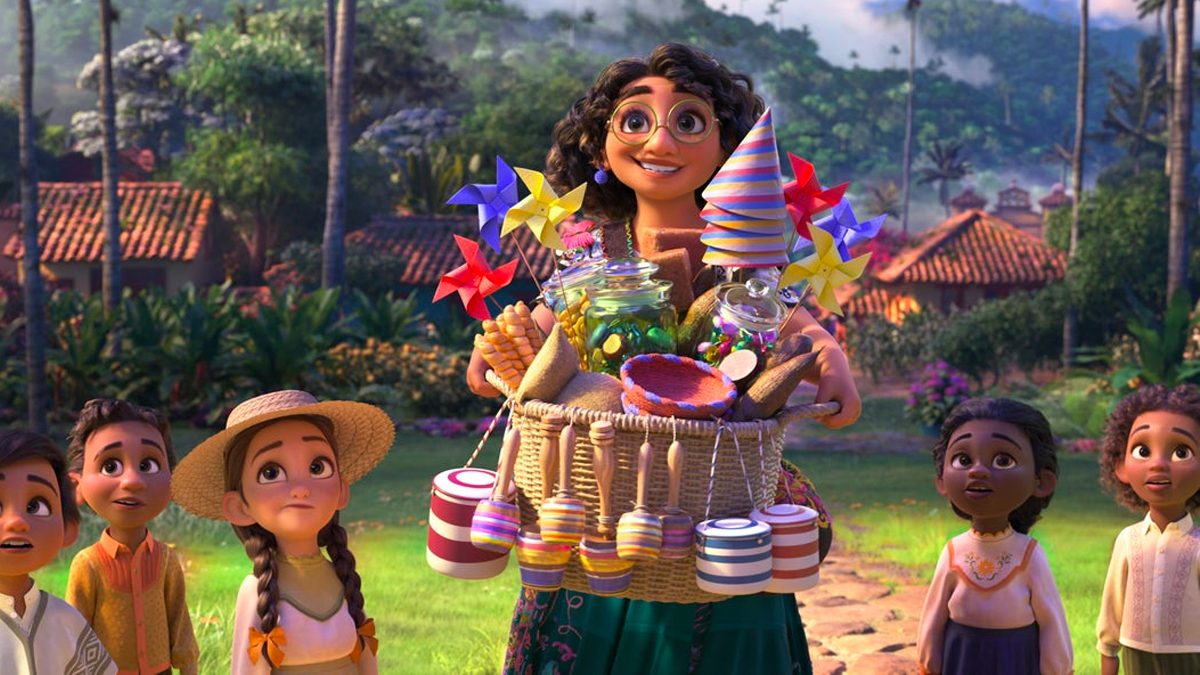 Mix the magic of Disney with the musical talents of Hamilton’s Lin-Manuel Miranda and you have this brand new animation that tells the tale of the Madrigals, an extraordinary family who live in a wondrous, charmed place called an Encanto. We caught up with Disney animators Renato dos Anjos (Head of Animation) & Kira Lehtomaki (Head of Animation)  to talk about the new movie that is destined to become a new Disney classic.

The culture and tradition of Columbia are integral to this film. Can you tell me a bit about the process you went through to ensure it was as authentic as possible?
Renato dos Anjos: It all started with the directors; they went to Columbia and spent quite a bit of time there. They visited different places, and they brought back a lot of ideas that they loved about the country, including what elements they wanted to portray and the type of architecture. They brought in consultants to talk to us, and they gave us classes and lectures about Colombian culture and history. When we started the animation properly, we had a group of consultants, and we would show them the sequence we were working on and ask them if it looked authentic. If they saw anything that could be better, they always gave us guidance. When we needed to do something specific, we would check with them about making it as authentic as possible. We learned that in Colombia, people think with their lips. It sounds strange when you say it, but it is something that needs to be seen and is a big part of Columbian life. It was a huge collaboration between the directors, the consultants, and then all the animators.

You mentioned architecture, and the family house is more than just a house; it is a living character. What was it like bringing a house to life?
Kira Lehtomaki: That was a huge challenge. We are used to animating characters with faces, and here we have a house that had to emote and had to have opinions about things and interact with the family. Early on, the directors told us that they did not want the house to come across as an enchanted house where all the objects could also move around, so we had to figure out its logic. We determined that this house was a gift to the family created out of the earth, and it was a living thing. Anything that was installed or attached to the house could move like a limb, but if there was a chair sitting in the middle of the kitchen or something in the dining room, the house couldn’t move it by itself. If the house needs to move something, it has to move the tiles underneath the chair to move the chair into place. Once we determined those rules, we had to figure out how the house communicates and shows emotion. How does a house say hello? Thankfully, many Colombian houses have beautiful shutters, so we could use some of the shutters to help communicate. Certain things were very simple to determine, but others would take six times to correct the communication.

The stairs are unique and can do something quite special. Can you tell me how that idea came about?
Renato dos Anjos: When we began to storyboard, that is when the creativity really comes in. One of the first things you see is that the house is very playful, and she is caring. She cares for the kids in the family, and she is a very gentle thing, even through floorboards and stairs. They can bend in a way real wood wouldn’t be able to do. Disney is a fun place to work because everybody builds upon each other. When something comes out in the storyboards and the story department, we work together to help make the idea a little bit more interesting and fun. Then the next department will take that on and make that even more extraordinary. When you see the movie, you can see a huge collaboration between all of us, and the stairs were just one part of the process.

You have worked together before, and you have both worked with Byron Howard (Director) and Jared Bush (Director/ Co-Writer) on previous projects. Does that give you a shorthand?
Kira Lehtomaki: Absolutely, yes. Renato and I joined the studio around the same time, 14 years ago, and we’ve worked on pretty much all the same movies since then. Byron directed the first movie that we worked on, so we’ve known Byron just as long, and then Jared came aboard during Zootopia, so we’ve had a long time together, which has been wonderful, especially with the pandemic. We are all working from home, suddenly we’re in Zoom boxes, and we can’t quite communicate the same way we would do in person, but it was great to have that shorthand with each other. Both of them are really keen on storytelling, comedy, and emotion; they always push us to do the most challenging thing for animators, which is to almost not do anything in a way. There are scenes where a lot is going on, but sometimes in the emotional moments or the very comedic moments, our instinct is to move the characters around. That is what we were hired to do, but sometimes those scenes only need one pose, and it’s in that stillness of the performance that storytelling, that the comedy, or the emotion come shining through. They are experts at stripping away anything extraneous in a scene and just letting it be what it needs to be to get the clearest communication of the story.

Music is important in this film, and Lin-Manuel Miranda has written the songs for the film. When it comes to adding in the music, did you work with Lin-Manuel?
Renato dos Anjos: The directors were in constant collaboration with Lin; he was involved earlier and he went with them on the trip to Colombia. His work is woven into the film, and the music in this movie is incredible. The musical scenes were a joy to work on, and inspiring. They are also challenging because we had to work in different ways, but I kid you not, it was so much fun. I am super happy with how the songs and the animation worked out together. We Don’t Talk About Bruno, is a really fun sequence, and one that I can’t wait for people to see.

You used real dancers to choreograph the dance sequences and based the animation around their actions. How did that work?
Kira Lehtomaki: We did, we used real-life people. It was one of the very few in-person moments during this pandemic; very safe, of course. We got to collaborate with the choreographer and Kai Martinez, our dance consultant. They went into the dance studio and brought the dances to life. They came in so early that they were very much collaborators in creating the characters. Before the music was written, the directors would write monologues for what the characters were thinking or what they wanted them to express through the song, and then Lin would write that music. We had a demo of Lin singing all the parts, including the girls, which was great for us to start pulling it all together before the actors came on board. We met with Kai and walked her through who each of these characters was, and then she took that and worked out how they move and dance. It was so great to have all of that happening concurrently at the beginning because we all got to inspire each other with the work that we were doing. Kai stayed through the whole process once we started animating. She is Colombian, and she worked in a lot of authentic Colombian dance moves and moments that would feel authentic to the culture and tie in with the more modern music elements. She worked with the animators one on one, they would show her in progress, and she would give us some notes. It was really cool to find out that we spoke the same language; dancers think so much about how their body moves, just like we have to think about it when we’re moving a CG puppet inside the computer. Normally, as animators, we think of ourselves as actors, but we had the chance to be dancers in this movie.

Who were your favourite characters to animate in Encanto?
Renato dos Anjos: Mirabel, our main character, and the capybara.

Kira Lehtomaki: Mirabel was fun, but I really enjoyed working on her sister Isabela who is so elegant and effortless. It is fun to pretend like you are perfect all the time.

ENCANTO is at Irish cinemas from Nov 26th