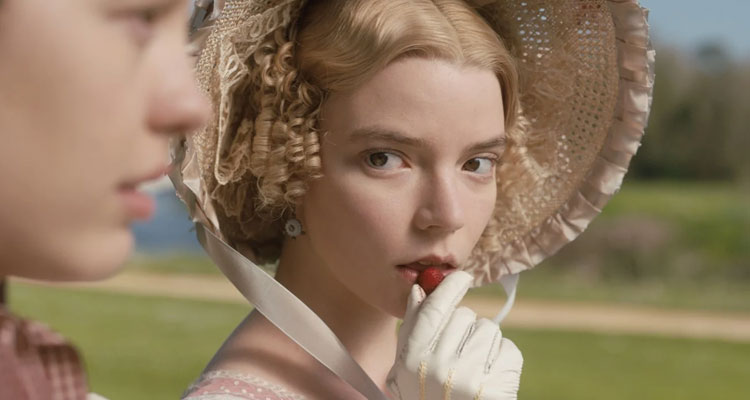 The Plot: Emma (Anya Taylor-Joy) has never been left wanting for anything, not even love. She’s a young woman who is otherwise engaged with being a matchmaking busybody in her 19th Century English village. With her skillful wit and careful composure, she knows how to tickle the fancies of the eligible men and women to bring them together. One such case is her rather desperate friend Harriet (Mia Goth), whom she seeks to match with vicar Mr. Elton (Josh O’Connor). Emma is not without her own admirers of course. The dashing but aloof Mr Knightley (Johnny Flynn) is another friend of hers – but he knows when to give her a taste of the truth…

The Verdict: It looks like Jane Austen will never go out of fashion, even in these woke-conscious times. The 19th Century author published only a handful of books, but film and TV producers keep returning to mine them for modern audiences. It’s no wonder of course. Austen may very well have given birth to the modern romcom, with her carefully structured and often humourous stories focusing on the status of women and what marriage means for their future lives. 1815’s Emma is one of her best-known novels and any new adaptation must strive to come out of the shadows of previous versions to justify its existence. Such as the 1990s versions, which featured Gwyneth Paltrow and of course the modernised take in the wildly popular Clueless. It’s with pleasure to report then that Emma 2020 is a delight

Austen described Emma as ‘a heroine whom no one but myself will much like’. Audiences will no doubt disagree after seeing the fabulously named Autumn de Wilde’s new take on it. It’s an ostensibly unusual choice of directorial debut for her, being born in Woodstock and known more for her music videos and photography in the music industry. Usually such newcomers are drafted in to direct a horror remake or sequel. However, she’s a good fit for the material. Working from Eleanor Catton’s wittily observed adaptation she sets up Emma as the queen bee of her town, buzzing about and stirring things up among the singletons whilst always keeping her own composure and distance from that thing we call love. De Wilde goes a little further though, pricking at the conscience of Emma as she openly offends an otherwise nice lady at a picnic. She also suggests that Emma pines deep-down for love and marriage, even if she doesn’t outwardly show it.

Having cast about for verisimilitude in seeking out an actor called Emma (Stone, Watson, Roberts perhaps?), de Wilde settled on Anya Taylor-Joy to play her heroine instead. She’s as terrific as always, bringing warmth, humour and a firm sense of independence that will resonate with modern times in that a young woman’s life should not be defined by marriage. She also brings a welcome hint that Emma’s facade could crumble at the right moment and with the right person. Possibly Mr Knightley, who is less the lovesick puppy and more the worthy equal thanks to Johnny Flynn’s measured performance. The pair crackle like fireworks. Between this and his thrilling performance in Beast, Flynn might finally live up to the potential of Screen UK Star Of Tomorrow 2005. The film looks simply ravishing too, with de Wilde composing her shots with a photographer’s eye and not trying to be hip with rapid editing. She just lets her adaptation breathe naturally and move along at a merry pace. Though, one wishes she would take a few more risks and make Emma a little edgier. Good stories can be worth re-telling and this delightful new Emma earns its keep.