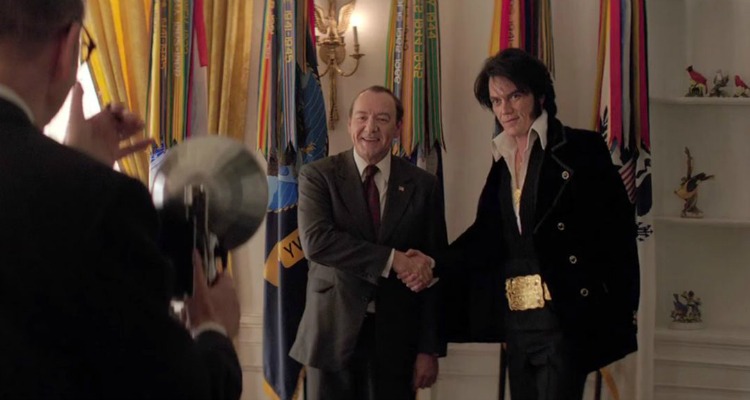 THE PLOT: On December 21st, 1970, Elvis Presley (Michael Shannon) arrived at the White House, asking for a meeting with then President, Richard Nixon (Kevin Spacey). Elvis had a plan to become an undercover agent for the Bureau of Narcotics and Dangerous Drugs, but getting a meeting with the leader of the free world is not easy… Even for The King.

THE VERDICT: ‘Elvis and Nixon’ is inspired by a true story, a story which led to a photo of the two together, a photo which is now one of the most requested in the history of the National Archive. There are certain things known about this meeting – such as the reason for Elvis seeking an audience with the President – but since this was several months before Nixon famously started recording every conversation in the Oval Office, much of this encounter remains a mystery.

The leading cast are strong in their roles; Kevin Spacey obviously revels playing Richard Nixon, and although his early scenes in the film feel a little overdone, Spacey soon settles into the role, making Nixon feel real without being a caricature of one of the most notorious Presidents in US history. Michael Shannon is an odd choice for Elvis Presley, but one that works in the context of this odd film. Shannon looks nothing like the King of Rock n Roll – even with the hair, the jewellery and the costumes – but there is something about his performance that captures Elvis’ way of speaking and his energy. Shannon makes Elvis almost wilfully ignorant of the reasons why he struggles to get the meeting with Nixon, but there are moments where the character opens up and not only makes this Elvis feel real, but makes him relatable, showing the person beneath the persona. Spacey and Shannon obviously had a great time working on the film, and the scenes in which they appear together are not only hilarious, but belie the oddness of the meeting as a concept. The rest of the cast features Alex Pettyfer and Johnny Knoxville as friends of Elvis, and Colin Hanks and Evan Peters as White House staff.

The screenplay, written by Joey Sagal, Hanala Sagal and Cary Elwes plays up the surreal notion of the King of Rock n Roll wanting to meet the President of the US, while making the characters rounded and real, but without going into too much political or personal history. Much of the film is taken up with the entourages of ‘Elvis and Nixon’ trying to find a way to make the meeting happen, but there is enough wit and side story to keep the audience engaged. Of course when the two finally do get into a room together, everything is ramped up; the comedy, the personal tales and the quirky oddness of the entire situation.

As director, Liza Johnson struggles with the pacing of the film from time to time, with more time being spent trying to keep tabs on Elvis than examining just why Elvis wanted the meeting in the first place. That said, trying to stretch the story of this strange meeting out to fill 90 minutes was always going to be troublesome. That said, most of the performances are strong and even though Shannon doesn’t quite play an Elvis that we recognise, it is a version of Elvis in terms of the film and, it works, especially taking into account Elvis’ meeting with an impersonator early on in the film.

In all, ‘Elvis and Nixon’ is as odd and strange as you could hope it to be. Spacey and Shannon don’t make their characters caricatures, more slightly different versions of these famous men than the ones we know. The pacing struggles from time to time, but the film is redeemed by the energy between the two leads once they finally get into a room together. A stronger story and examination of just what Elvis was thinking could have made for a stronger film, but as it stands, ‘Elvis and Nixon’ is and odd, quirky and hilarious film that is not without it’s faults.