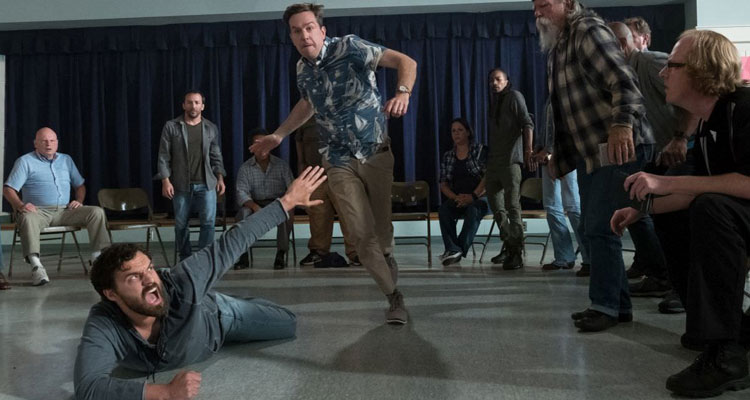 This month sees the release of Tag, Jeff Tomsic’s comedy that’s based on the real life story of a group of former classmates who organize an elaborate, annual game of tag that requires some to travel all over the country. Starring Jon Hamm, Jeremy Renner, Jake Johnson, Hannibal Burress and Ed Helms, the gam of tag is chaotic, no-holds-barred, and the men will go to any length to avoid being ‘It.’

We caught up with Ed Helms who told us all about the film, his upcoming move into dramatic roles, and why Trump is making life harder for comedy writers.

You’ve worked on a lot of projects with teams of comedic actors, such as The Hangover, The Office, Arrested Development and The Daily Show – what makes the comedic team on Tag work?

Basically me, to be honest. I’m carrying the whole thing. No, everyone’s awesome, this is a pretty special team. I actually have known Jon Hamm and Jake Johnson for a long time and have been huge fans of theirs, but have never had a chance to work with them until now. It’s super fun to just relax into a project with people you already like and share a sensibility with.

As the leader of the group, what would you say makes this group of friends special or different from any other?

I think what’s particularly special about this movie is that it’s a movie about playing tag, obviously, but it’s a movie about friends who love each other and will do anything to just stay together and keep this friendship alive. I love that. To me, that’s really sweet and special. That’s kind of like The Hangover, it’s what it recalls for me, that idea that these guys bicker and argue but they really love each other. It’s hopeful, it’s not cynical, it’s aspirational int hat I think we all wish we were closer to childhood friends. If we do this movie right, I hope audiences leave thinking “I need to appreciate my friends more, I need to reconnect with people or stay connected with people.”

So were you inspired to reconnect with friends in your life, since working on the film?

I’m very lucky to have some friends from childhood that I’m still close to. And there are always different things that keep you connected, whether it’s family connections or a common interest and int his case, it just happens to be this ridiculous game that they play!

So we’ve been watching some scenes and you seem to have a lot of room to improvise. As an actor in comedy, do you feel more comfortable when you get to bring your own humour and input to a scene?

Definitely. Though it can vary. It kind of depends on the process a little bit, how the script works, how the relationships work. But it also comes down to who the other actors are and how they work; are you going to be able to play and riff off of each other. And very quickly on this movie we just found a comfort level and we’re always pitching each other lines, saying “Oh you should day this, your character would say this” or “try it this way.” It works because everyone’s humble and not trying to hog the best moments for themselves, which is definitely the most fun way to do it. You’re just trying to find the best possible version of any joke or scene, and our director Jeff Tomsic is a great facilitator of that. He just wants us to play and find the most fun and natural version.

You’ve been working in comedy for a long time. Where does that drive to make people laugh come from, and why did that take precedence over more dramatic work?

I do love dramatic performing as well, but I think that I love to laugh, and I love being on set and having someone make a joke that takes us all by surprise and makes us crack up. It’s just those fleeting moments of pure joy and if I can bring that to more people, it’s hugely gratifying. When I get to see a movie that I’ve been in and see the audience laughing, it’s really fun. It just feels like adding positive energy to the world. And right now, I think we could do with more of that!

You do have a more serious role coming up in Chappaquiddick, which is about Ted Kennedy’s involvement in the fatal 1969 car accident that claims the life of a young campaign strategist. How is it going in for dramatic roles, do you have to pitch yourself to directors, saying “I know you’ve seen me be funny, but I can also do dramatic work”?

In that case, the director just saw something in my comedic performances that made him really believe there was something there. Because I think what it always boils down to is truth, how honest is a performer and how honest does it fell onscreen. And in that way, I don’t feel like comedy and drama are that different, it’s just different material. But there’s definitely a perception gap in the world at large about the expectations of what projects I might do or what I might be right for, so I’m super grateful to that director, John Curran, for saying “You’re definitely right for this part.” It was a tremendous challenge, but also so fun. I just love trying to find an honest point of view and a genuine delivery of the material, within a complex character. Even in that movie, the director was very collaborative and there was some improvisation and honing of the lines, which was really an eye-opener for me. Because I saw that improvisation isn’t always about finding a joke, it’s about finding the best version of something. I loved it and I’m super proud of that film, and I hope people see it.

The South Park guys, who made one of the greatest satire shows of all time, have looked at the current situation and said “There’s no way you could write this, it’s too crazy!” The way I look at satire and especially topical satire like The Daily Show is that you take what’s going on and push it to a logical but also silly extreme. That’s where the teeth are, that’s where the fun sharp jabs are. But what’s going on today, it’s very hard to heighten what’s going on, just because it is so extreme. From a sociological standpoint, it’s hard to take what’s happening and make it more crazy – because it’s already utterly insane. But I still love The Daily Show and think Trevor Noah is doing amazing work. I miss feeling close to the pulse of politics like that.

Does your experience as a comedy writer help you as an actor?

I think any skills on sets help you as an actor. I actually started out as an assistant editor so I started out cutting scenes and working on that process, and that has been one of the most valuable experiences of my life, because I can picture how a scene might work, or what a director or editor might need. So I often hop over and look at playback to see how my performance reads, because it doesn’t always read on camera like I think it will. But watching it, I can then make adjustments and finetune something. But writing is just a discipline you need for joke creation, and to keep a narrative straight – which helps with this movie, because we’re all over the place! Hugging one minute, punching each other the next! I think it’ll be great though.

TAG is at Irish cinemas from June 29th