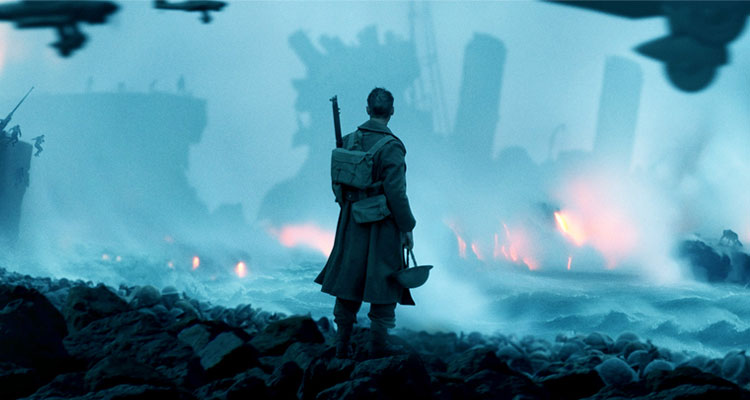 DUNKIRK (UK | Netherlands | France | USA/12A/106mins)
Directed by Christopher Nolan. Starring Mark Rylance, Tom Hardy, Kenneth Brannagh, Harry Styles, Barry Keoghan.
THE PLOT: In 1940, 338, 226 Allied soldiers were rescued from the beach in Dunkirk, having been pinned there by the advancing German Army. The evacuation did not run smoothly however, with a fierce battle being fought in the skies and the seas of Dunkirk as the soldiers prayed for a miracle.
THE VERDICT: ‘Dunkirk’ is something of a passion project for Christopher Nolan, since he first wrote the screenplay for the film 25 years ago, after crossing the English Channel to Dunkirk. The good news is that this triptych film is a taut and engrossing thriller that mostly steers clear of sentimentality and flag waving, and among its cast of thousands are some fascinating actors at the top of their game.
Leading the cast are Fionn Whitehead as Tommy, an Allied soldier trying to find a way home; Mark Rylance as Mr. Dawson, an English man who takes his son in their boat to cross the channel and do their bit for the war effort, and Jack Lowden as Spitfire pilot Collins. The story is told in three parts; from land, air and sea, and these actors are the main players in each part. The rest of the cast features Kenneth Brannagh, Tom Hardy – who has most of his face obscured for the second time in a Nolan film – Harry Styles, Barry Keoghan, Tom Glynn-Carney, Cillian Murphy and James D’Arcy. All actors do well in their roles – yes, even Harry Styles – and their shared strength and panic form the emotional core of the film. Of course, some of the cast have more emotional weight to carry than others, and it is a delight to have Mark Rylance show why understated performances are so full of soul, and Kenneth Brannagh obviously relishes the fact that he says the most emotionally charged word of the entire film. Casting up and coming actors as the young soldiers in ‘Dunkirk’ was a great move on Nolan’s part, but it is also where the casting of Harry Styles begins to jar; even though Styles does well with what he has to do in the film, it is distracting to have such a famous face in with a cast of unknowns, and often pulls the audience out of the film.
The screenplay, written by Christopher Nolan, is one of minimal dialogue; words are used sparingly, giving the film the chance to show off the power of cinema through the beautiful visuals and haunting score. The film is divided into three storylines, each showing the evacuation from a different perspective and covering a different amount of time; a week, a day or an hour. This serves to ramp up the tension and drama of the film, but it also leads to some confusing moments as the film jumps from day to night and back again. Nolan’s screenplay excels in simply focusing on the people on the beach at Dunkirk; this is not a film of politics, good vs evil or the story of someone trying to get home to those they love, instead it is a pure and simple tale of survival, which allows the visual to tell the story, without needing to hammer home the story of the events leading to the evacuation; a story which has been told on screen many times.
As director, Christopher Nolan plays with minimal dialogue, beautiful cinematography and weaves in the gripping score from Hans Zimmer – which, admittedly, sometimes acts as director, filling in some of the gaps in Nolan’s directing – to create a taut, well paced and often breathtaking thriller, set against the backdrop of war. ‘Dunkirk’ is a race against time, a survival tale and a tale of humanity, but never tries to lay the blame at anyone’s door, preferring to just tell the story of the events of one week, and this is to the film’s credit.
In all, ‘Dunkirk’ is a taut, fast paced and engaging thriller, that is made better by Hans Zimmer’s powerful score, the sound design that has planes screaming from the sky, and Hoyte Van Hoytema’s beautiful cinematography. There are times when the three different timelines work against the film, however, and although Styles is good in his role as an Allied soldier, his presence is often a jarring distraction. Still, ‘Dunkirk’ is a breath of fresh air in a summer season full or remakes, reboots and sequels.
RATING: 4/5
Review by Brogen Hayes