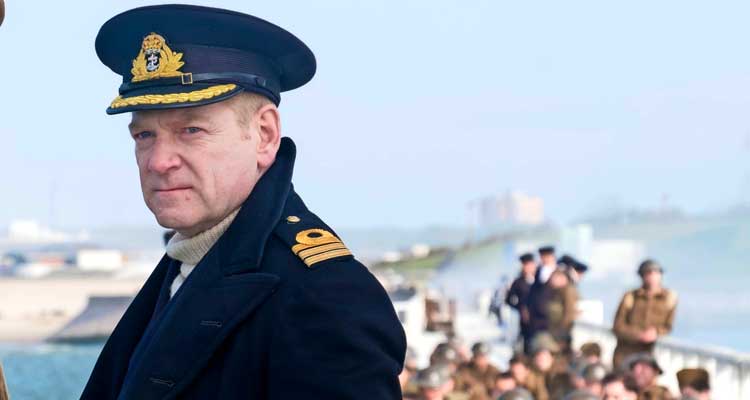 In Irish cinemas from July 20th, DUNKIRK is the epic war movie from acclaimed director Christopher Nolan that is wowing critics across the country. In the film Kenneth Branagh plays the role of Commander Bolton, check out his Q+A below…

When writer/director Christopher Nolan first approached you about Dunkirk, what attracted you more:  the filmmaker or the subject matter?

KENNETH BRANAGH:  It was the filmmaker.  I didn’t know what the subject matter was initially.  When Christopher first got in touch, he only said he wanted to chat with me about a project.  Later, when he was in London, he came to see our theater company performing Shakespeare’s The Winter’s Tale, and the next morning we were able to meet.  That was when I learned he was making a film about Dunkirk.

He walked me through the story, and told me he wanted to compress and condense the flavors and experiences of Dunkirk across intersecting stories set on the land, on the sea and in the air.  He left me with the screenplay he’d written, which was surprisingly lean but tremendously powerful.  It combined all the qualities people associate with Chris – the mathematically precise construction, the humanity and layers of meaning in the storytelling, the epic scope and driving, visceral pulse, all of it.  I found it to be both a thrilling ride and a profound meditation on war and this extraordinary moment in history.

Growing up in Ireland, I often heard people use the expression ‘Dunkirk Spirit,’ but it wasn’t until I started learning about World War II that I came to understand what it meant.  It has to do with never giving up, no matter how impossible the odds.  An entire nation united in an epic, courageous, impossible evacuation effort to bring some 400,000 trapped soldiers home from enemy-occupied lands.  That spirit transformed a potentially catastrophic defeat into a ‘miracle of deliverance,’ as [Winston] Churchill called it.

What is so striking about it was the sheer scale of the event, and how deftly Christopher reveals the enormous scope and high stakes of this battle through the eyes of the people fighting it, or just trying to keep themselves and each other alive.  They may be on the beach; they may be in the air; they may be on ships crossing the [English] Channel; but each is experiencing just one tiny piece of this massive, chaotic operation, and it can be quite a narrow one.  In Christopher’s screenplay and in his execution of the film, he brings all those personal moments together to immerse the audience in a visceral experience of war while giving us a broader perspective on the event than any individual character has in that moment.

What can you tell us about your character, Commander Bolton?

KENNETH BRANAGH:  Bolton is a composite of some of the real people who were there on the beaches at Dunkirk for the duration.  He’s charged with organizing the logistics on the Mole – a narrow breakwater that, in this desperate situation, is being used as a temporary dock for the ships coming in to evacuate the stranded soldiers on the beach.

So, Bolton carries enormous responsibility and therefore has to keep a cool head and maintain as much control as possible under these unpredictable and extremely dangerous conditions.  Yet he’s reacting to circumstances and making in-the-field decisions that may be contrary to the expectations of his commanding officers at a time when communications are, by today’s standards, relatively primitive.  Based on my conversation with Chris, I came to understand Bolton as a character who attempts to remove any emotional reaction to the enormity of the situation, yet he’s exactly the person you would want in charge because he’s practical, pragmatic, tough, but also compassionate.

Nolan is known for keeping things as real and ‘in-camera’ as possible.  Was that challenging for you as an actor, out there on the Mole in Dunkirk, being battered by the elements?

KENNETH BRANAGH:  In a way, yes, but that was only a distant hint of what it might have been like in reality.  For the real people who stood on that Mole, home was so close they could see it – just 26 miles away – and yet they were stuck in this kind of hell.  Focusing on the reality of the experience was very important to Chris and to all of us.

Standing on that Mole, battling the elements and embracing the variables becomes ingrained in the DNA of the character.  The tide is a variable; the weather and even the sun could be deceptive.  When the winter kicks up across that Channel, it is bitterly cold.  It’s four seasons in a day, with every possible condition, sometimes all at once.

Yet filming on this beautiful beach in France was the key to anchoring our imaginative effort to put the audience in this situation and evoking the spirit of the people who were there.  They didn’t win medals; it wasn’t considered a victory; but, nevertheless, it was a miraculous deliverance.  It delivered us to the world we’re living in now.

Many of the characters we meet in the film are young, fresh-faced men, thrown into this horrific situation.  What is Commander Bolton’s perspective?

KENNETH BRANAGH:  Bolton is from a generation that had been in the First World War as well.  So, to come out of the War to End All Wars and find himself here, you can feel an older generation of Brits saying, ‘What have we come to again?’  I think that’s a perspective Chris was interested in expressing through this character.

Where Bolton is on that Mole, he can see into the far distance the massive numbers of people involved, and feel an incredible sense of youth exposed, at risk and in danger, and the role his generation played in setting them up to be cornered on this strip of beach.

Bolton’s a commander of the British Navy, and you have several scenes with James D’Arcy, who plays Army Colonel Winnant.  Is there tension between the two characters?

KENNETH BRANAGH:  Yes, indeed.  Winnant is Army, which means he’s part of the group that got the 400,000 soldiers to Dunkirk, and are now relying on the Navy to get them off the beach quickly.  The Army and the Navy have rivalries with each other generally – even more so in this in this extreme situation – and James and I got to play a bit with that dynamic.  I think James is an excellent actor, and it was an absolute pleasure to work with him on this film.

When did you first become aware of Nolan as a filmmaker?

KENNETH BRANAGH:  The first film that I saw was Memento.  I had the classic Christopher Nolan experience of watching that film with a few other people, then spending an hour of intense conversation trying to work out what it meant, being certain that we did, and ultimately understanding that we didn’t [laughs].  We ended that hour knowing just one thing: that we were going to see the movie again.  It was imaginative, intelligent and unusual, as all his films since have been.

Chris has found a way to take an independent approach to popular movie-making that is unique in modern cinema.  He makes films that are extraordinarily complex and often challenging, and yet millions of people not only go to see them, they see them again and again.  Regardless of how popular his movies become, he remains an artist and an auteur.  I think for that reason he has become a heroic figure for both the audience and the people working behind the camera.

What impact do you think that unique approach has on Dunkirk?

KENNETH BRANAGH:  What I witnessed on Dunkirk was the hands-on, detailed approach Christopher Nolan takes to even the smallest aspect of this giant operation, which is entirely under his control.  You can see what an enormous undertaking it is just by walking along that beach, which was packed with extras – and his vision permeates all of it.  Regardless of the scope, it feels like a highly personal film that he has chosen to make on a vast scale.

DUNKIRK is at Irish cinemas from July 20th