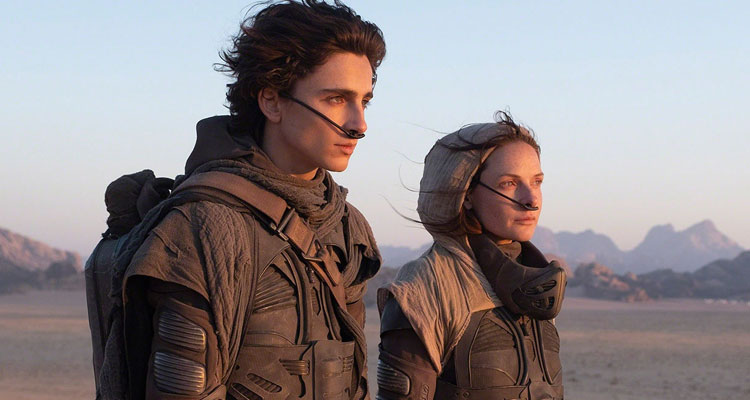 The Plot: Another time, another world. Two warring houses compete over the most powerful commodity in the universe – the spice melange which can only be found on the planet Arrakis, also known as Dune. Duke Leto Atreides (Oscar Isaac) arrives on Arrakis to start spice mining with his concubine Jessica (Rebecca Ferguson) and his son Paul (Timothee Chalamet), but rival Baron Harkonnen (Stellan Skarsgard) has other plans. As Paul adapts to life on the harsh planet, he comes face-to-face with the native Fremen warriors hidden in the desert and a potential prophecy that will change everything…

The Verdict: It was called the great unfilmable novel, a richly-layered and densely built-up example of world-building on a scale that defies imagination. Long before Star Wars, The Matrix and Game Of Thrones came into being, Frank Herbert’s 1965 novel Dune became a landmark work of science fiction. There have been previous adaptations for film and television, most notably David Lynch’s unfairly maligned 1984 film adaptation which has its own impressive cinematic moments. Is this beast of a book just too difficult for any director to grasp and mold into something adaptable and palatable for a modern blockbuster audience? Not quite, it seems. Denis Villeneuve has already proved himself a highly capable director of science fiction epics like Blade Runner 2049. Now he has dipped back into Herbert’s considerable well and come up with an impressive piece of filmmaking that will leave you feeling the baking desert heat and gasping for more.

It’s a risky venture for Villeneuve though. Having openly stated that he was only half-satisfied with Lynch’s vision of the book, he’s sidestepped the minefield compression issue by only taking on the first half of the book for now, hence the opening title of Dune: Part One. With more time and breathing space for the story and characters to evolve, he’s focused on getting the story to a certain turning point. Thereby, leaving it up to the audience to decide if they want to see the rest of the story and for Warner Brothers to stump up the not inconsiderable amount of cash for Villeneuve to finish his vision. There’s potential for more too – there’s a spin-off TV series about the mysterious Bene Gesserit sisterhood that are manipulating things in the background and several other Dune books too. Whether we’ll get to see Part Two is unknown at the time of release. What of this first film then?

Villeneuve has said that he wanted to make a more audience-friendly film than Blade Runner 2049. This is evident in the streamlined approach to the dense story, setting up the characters, environments and intergalactic conflicts fairly quickly and then letting the story gradually reveal itself on the broadest canvas possible. His script with Jon Spaihts and Eric Roth builds up the three strands at focus – the Atreides, the Harkonnens and the Fremen caught between them as potentially powerful allies or deadly enemies. All of this is done without shortchanging or underserving any of the strands, so credit to Villeneuve and his co-writers for that. The film is fairly faithful to the book and is similar at times to Lynch’s version and then entirely different in many other respects. It’s a distinct directorial vision that has a firm grasp on the material and a confident vision of what cinema can do when pushed to the boundaries.

Make no mistake – this is a film for the biggest cinema screen and best sound possible. Villeneuve puts every dollar right up there on the screen from the sandy vastness of Arrakis (filmed in Jordan to look suitably otherworldly) to the rumble and roar of the giant sandworms and futuristic armies duking it out – beautifully underscored by Hans Zimmer’s music. It’s as if Villeneuve, a longtime fan of the book, made the film in his mind long ago and has now translated that to the screen with that same passion for the material. It’s more than just fan service (which works well, mind you). It’s also about building a legacy for a franchise that could keep going, by making it more accessible for all (but not dumbing-it down of course). That does come at a narrative cost though. What prevents the film from pushing further into 5-star territory is an apparent lack of wonder and mystery about its universe, particularly in relation to the role of the mind-altering spice melange. The battle over this precious resource comes across as airbrushed, as if Villeneuve didn’t want to dwell too much on its ponderous significance for now. Maybe he’s holding it back for later, but one would have liked more emphasis placed on its role, the prophecy theme and that of the background players pulling the strings.

There’s much to admire here though, from the visionary filmmaking to the top-notch visual effects and a story that moves along at a cracking pace to a natural conclusion (for now). The performances are all solid too, from Timothee Chalamet’s wiry energy to Oscar Isaac’s noble father and Stellan Skarsgard’s larger-than-life, oil-bath loving villain. This Dune has set the stage for an almighty conflict to come, with the potential to be the definitive take on Herbert’s masterwork. On the evidence presented it would be a travesty if Villeneuve was ordered to remove his toys from the Dune sandbox and put them away for good. He’s put a tremendous effort into this film and it shows. Well worth the long wait and that’s saying something after months of lockdown spent in front of a boxy television. Dune is too big a vision for any television to contain. This is what pure cinema is all about.