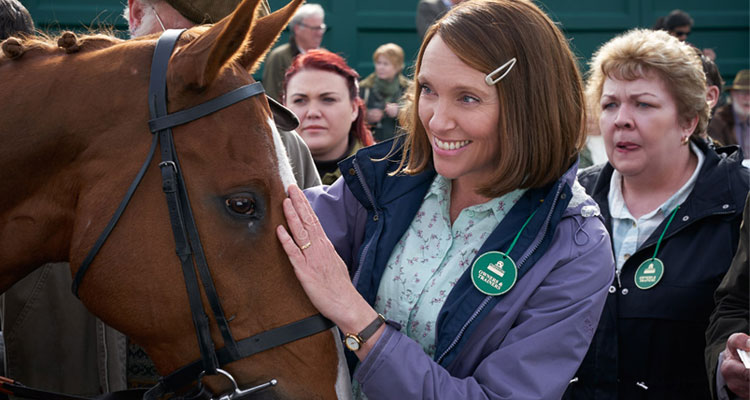 Get ready for the feel-good film of the Summer! Based on the incredible true story of Dream Alliance, bred on an allotment, born to win. Starring Toni Collette, Damian Lewis, Owen Teale and Joanna Page.

As a Welsh person, had you heard about Dream Alliance?
When Dream Alliance won the Welsh Grand National, it was a story all over the news here in Wales. It was on everybody’s lips in the pub and one of those stories that very quickly became the mythological tale of the horse born on an allotment that goes on to be this champion in the sport of kings. Everybody was talking about it, it was very much on my radar.

When the producer came to you, was it something you very much wanted to direct because of the Welsh connection?
Very much so. It’s about the community in the South Wales Valleys, which is where I grew up. It’s a community that suffered so much over the years. When I grew up, I saw those communities change from places where people had a sense of purpose and identity, and jobs in the steelworks and the coal mines, to places with an incredible feeling of loss. People lost their jobs, and they lost that sense of pride and that sense of hope. When I read this story, I saw it as a reawakening and rediscovery of a sense of common purpose, where you know what people can achieve when they create an opportunity. It’s one of those hopeful stories that I absolutely want to tell.

Toni Collette is such an amazing actor. Did you want her on board from start and had you any doubts about whether she could master the Welsh accent?
When I first read the script, she was my very first thought because when you make a movie like this, you need to have somebody that the audience has a relationship with. When they see a face on the poster or see the trailer, they say I want to go to this movie because I know, and I like them. Toni was my number one from the start. There were so few actors, so few movie stars who can genuinely play real people, because they’ve got this charisma and this otherworldliness that allows them to be these amazing people on the screen. But in this, we needed somebody who could inhabit a real person and let you believe that this was somebody who lives as a working-class woman who lives in the South Wales Valleys. Toni can do that; it is an amazing gift that she has. She is, of course, Australian and Welsh is fiendishly difficult. When you get it wrong, it can sound Jamaican or Indian. We spoke to her very early on, and I said, you know, I want it to be authentic; everything needs to feel authentic, especially the accents, and she worked really hard with a dialect coach, and I think they nailed it. It’s note-perfect. She did an amazing job.

Usually, there is more animosity between the couple in films like this, but there’s such love there. Did the bond come naturally between Toni and her on-screen husband, Owen Teale?
The real Jan and Brian have incredible natural warmth. They have a marriage that has been through a lifetime of ups and downs, but they made it through together. I wanted our on-screen Jan and Brian to have that same relationship as the real couple do. Owen [Teale] is one of our finest Welsh actors. He has this big burly frame and this incredible strength, but he also has the heart of a marshmallow. He melts your heart as an audience member because he’s so vulnerable. He and Toni worked together a few years ago, so they already knew one another, and it gave them a shorthand to create this very warm on-screen relationship.

Anyone familiar with Welsh TV or film will recognise so many of the actors in the supporting cast, and one of the things that really struck me was that as a cast together, they have such great camaraderie. Was that something you workshopped or was this a case of this group of people came together and just fitted?
On our first day of rehearsals, the first thing we did was we did some singing. We had the singing coordinator lead the way, but I really didn’t need to rehearse anymore because that bunch of actors would sing at the drop of a hat. The problem would be that they wouldn’t stop! I would call cut, and they would still be singing because they were having such a great time. I think they became like the real-life syndicate, having so much fun when they were at the race. There’s an inbuilt adventure to the story that while making this film, it rubbed off on them, and it rubbed off on the crew as well, and it gave us all such a sense of inspiration. I hope people see the movie, and I hope it rubs off on audiences.

Dream is an essential character, but do you go about casting a horse?
Colour was a big thing. Dream has a very distinctive white blaze, and he has four white socks. For a long time, we were looking for exactly that. We worked with a company called the Devil’s Horsemen who provide horses for lots of the big films, and they had a brilliant acting horse who didn’t have the white socks, and I was like no, no, he must have the white socks. And then they said “Well we could get makeup for him”. So, was that how we got around that, we had a horse makeup artist.

When it came to the technicalities of filming the races, did the horse handlers help coordinate them?
They did, but it started with the idea I wanted. I wanted to do something different to what racing movies have done in the past, which is in the past, they’ve tended to anchor around the jockey’s experience and how the jockey is doing in the race. Our story, it’s all about the horse. How is Dream doing in the race? How is Dream’s relationship with Jan? I wanted to draw the audience right in the middle of the race and experience it as though they were the horse which meant that we needed to find technical ways of getting the camera as close as possible. One of the things we did was to have a horseman on the horse, holding the camera with one hand so that the camera’s right there on his shoulder and experiencing it with him, so that you feel every jump, every heartbeat with the horse. We had a team of incredibly talented people who bridged this dream of what it needs to look like at the end with how it needed to be filmed to achieve the look. It was a very technical experience, shooting the races to create something that feels organic and very seamless.

Jan and Dream have a great bond in the real world, but Toni manages to capture that feeling on-screen, and the horse seems to connect with her. Was that a bit of camera magic, or did they really have that connection?
They had very little time to rehearse together because she was in another movie in the States, and we shot those scenes between her and the horse on the second day of the shoot. I don’t know how it happened, horses have souls, so I believe he saw something in her. When Toni opens her heart to him, they genuinely did connect at that moment. Something was going on between the two of them. As a director, you can’t direct a performance from the horse. He gives you whatever the horse wants to do, but at that moment, we struck gold. He is an amazing actor! Some of my colleague on the film have spotted him in other films since. We’ve got a WhatsApp group with pictures of him in action. His film career continues!

There is a great sense of humour in the film. Was that something you wanted to have there from the start?
I took my cue from the real people, because the real people that the story is based on are incredibly funny. Brian, in particular, is hilarious; spending any time with him is great because he is such a joker. Bringing that into the film, and finding that sense of camaraderie, in Ireland you call it craic, in Wales we call it the hwyl, it’s that sense of warmth and fun people get together. People in Ireland and Wales are incredibly warm-hearted. Having that banter and having fun and being able to laugh at ourselves is incredibly important, and it was important to have it in the film.

Did many of the locals get involved in filming?
We filmed in Blaenavon, which is right at the top of one of the Gwent valleys, because we wanted everything to be as authentic as possible. We had open casting in the local village hall where people came along and registered their interest, and lots of them were cast in the smaller parts of the film. The objective was to tell the truth about this place, to represent it as truthfully as possible.

The film played at Sundance. What was that like?
I was so thrilled to play at Sundance, one of the world’s big independent film festivals. I guess I was a bit worried an American audience wouldn’t connect with us, but I definitely didn’t need to worry about that. On the night of our premiere in Salt Lake City, the audience were whooping and cheering, especially during the horse races. They were so vocal in their response. It cemented my realisation that this is a universal story that can travel anywhere. Anyone who understands what it’s like to have lost and rediscovered something, or anybody with any affinity with horses and horse racing, will absolutely get this film and understand its excitement and thrills.

This was due for release last year but was delayed because of the pandemic. How happy are you that it didn’t go online like so many other films in the last 15 months?
I am so pleased that our distributors, Warner Brothers, decided not to stream this film because it was made as a theatrical experience. The horse races, especially, were created for the big screen, surrounded by sounds that envelope you, to be dwarfed by these huge, magnificent horses. The film’s scale was designed for the cinema. I’m thrilled that we’re getting to have a theatrical release. We have gone through such desperate times, and it’s been really hard on communities like the very community that we focus on in the film, and it feels like a really uplifting story, the perfect tale for our dark times.

If there is a message you want the film to send, what is it?
Follow your dreams, but also it is about a community coming together and supporting each other, and doing something other than for money, doing something for its own sake. I think it feels like a great hopeful tale.